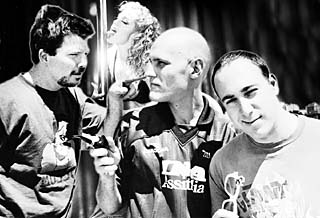 Austin -- The men of Mr. Sinus -- Jerm Pollet, Owen Egerton, and John Erler -- gathered in the screening room of Mr. Erler's Eastside home. Known for their often-ingenious dissection of bad cinema, the comedy trio had agreed to watch a terrible movie, a truly vile piece of crap chosen by the author, and offer commentary as it unfolded. The author selected "Showgirls," the classic 1995 Paul Verhoeven satire-cum-sextravaganza, a cult hit among irony/kitsch buffs and a personal favorite.

Mr. Pollet, wearing a fancy red Western shirt, was quick to check the author's expectations. "I'm not sure we can do 'Showgirls,'" he opined. The only one who had already seen the film, Mr. Pollet said he ruled out "Showgirls" early on, adding, "That movie is already so ridiculous." Mr. Pollet then picked up the author's tape recorder -- a small, silver rectangle with a black string attached. "Hey, this looks like a little mousey," he said of the tape recorder, scooching it around the table as if it were sniffing things. "Here mousey, mousey, mousey."

Mr. Erler cracked open a Zeigenbock and took a few slow pulls. He offered one of the stout refreshments to Mr. Egerton. "Are you my Zeigenbuddy?" Mr. Erler asked hopefully. Mr. Egerton responded that yes, he was indeed Mr. Erler's Zeigenbuddy.

The film began. Written by Joe Eszterhas in what we can only hope was some kind of ether haze, "Showgirls" is the story of dancer Nomi Malone, who works her way up from Vegas stripper to Vegas showgirl, only to find that the line between the two (like the clothes she wears) is perilously thin. Ms. Malone is memorably played by sassy starlet Elizabeth Berkley, who rose to prominence playing Jessie on the Saturday-morning television favorite "Saved by the Bell." Throughout the movie, Mr. Pollet, Mr. Egerton, and Mr. Erler paid homage to this period in Ms. Berkley's career, often asking when the actress appeared, "Hey, where's Screech?" or suggesting at crisis moments, "Why don't you go tell Principal Belding?"

In particular, Mr. Erler showed a touching concern for Ms. Berkley and her ostensible lack of motor skills. "How is she going to be a dancer when she moves like that?" he begged of us as Ms. Berkley violently threw herself against a car, and then a wall, and then a desk, and then the street. Every move counts in the dancing world, and Mr. Erler should know. He does a mean robot.

Mr. Pollet, on the other hand, was compelled by James Smith (Glenn Plummer), an ersatz dancer/bouncer who befriends the complicated Ms. Berkley. Mr. Pollet rewound the tape to catch the scene in which fate brings Mr. Plummer and Ms. Berkley together at a dance club. Ms. Berkley is out of control in a red fringe dress (which Mr. Erler eyed enviously) when Mr. Plummer breaks the news that Ms. Berkley can't dance. "Oh yeah?" she asks, rubbing her buttocks into his groin area. "What am I doing?" To which he replies, "Teasing my dick."

"That's such a great line!" said Mr. Pollet, who also shushed his companions when Mr. Plummer apologizes to Ms. Berkley for a certain indiscretion by reasoning, "I have a problem with pussy." Mr. Pollet suggested this might make a nice title for the story the author was writing.

At the beginning of the film, Ms. Berkley burns the midnight oil at the Cheetah, a gentlemen's establishment where she shares a dressing room with lesbians who smoke pot and stroke each other's naked, sweaty breasts. The owner of the Cheetah is Al, played by grizzled character actor Robert Davi. Mr. Davi explains the club rules to a new employee: "If you wanna last longer than a week, you give me a blow job. First I get you used to the money, then I make you swallow."

"He reminds me of Tim from the Alamo," said Mr. Egerton wistfully. The men nodded in appreciation.

One night at the Cheetah, Ms. Berkley is surprised by the appearance of Las Vegas showgirl Cristal, played by toothsome Gina Gershon, and her boyfriend, played by Kyle MacLachlan. Mr. Egerton especially admired Mr. MacLachlan's bangs. When Ms. Gershon solicits Ms. Berkley to give her boyfriend a private dance, all three men break out into the sultry Tina Turner hit, "Private Dancer." Loudly.

Later, Ms. Gershon is waiting for the lap dance when she taps out some powder on her pinkie and sniffs it.

"Hey," Mr. Egerton pointed out, "that could be snuff."

At that moment, Ms. Berkley pulls off her top.

Grabbing ahold of her breast, Ms. Berkeley sticks her tongue out and touches it to the tip of her nipple.

"I need to go back to Las Vegas," said Mr. Egerton.

As the music reaches its hectic climax, Ms. Berkley mounts Mr. MacLachlan and performs something resembling naked bullriding, only sideways.

Tired from their huge Mexican breakfasts and about 15 minutes cavorting in the sun, the men of Mr. Sinus needed a break. When they take a break, the men of Mr. Sinus like playing Scattergories, a game of cunning and wile from Milton Bradley. Mr. Erler won the game, but not before Mr. Egerton implored us to believe that "limpids" are a kind of insect, or before Mr. Pollet argued passionately that Lionel Richie is a popular Halloween costume.

And Some Public Dances as Well

Highlights of Mr. Sinus' career and information on "Showgirls":

This article is the first and only in a series of discussions with noted wiseacres who make fun of bad movies. Movies are selected by the interviewer and may have no particular significance to the subjects. Apologies to The New York Times.