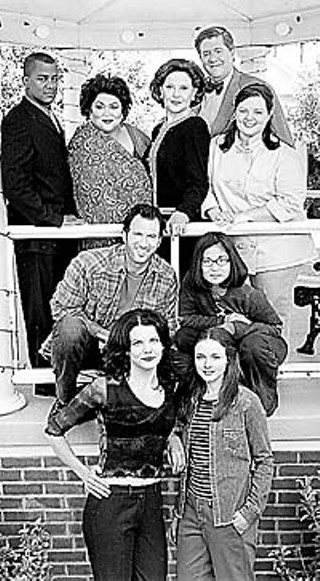 Give these gals an Emmy!: The cast of WB's Gilmore Girls

Last week's "TV Eye" focused on the snub of Buffy the Vampire Slayer by the Academy of Television Arts & Sciences in this year's Emmy Award nominations. I said so much on that topic, I neglected to make note of some of the other egregious omissions by the Academy. Here's the list of supporting players who deserved a little Emmy support:

Gilmore Girls: This slightly off-kilter, mother-daughter "dramedy" brightened the WB lineup last year. Although caught in the ratings crossfire between Friends (NBC) and Survivor (CBS), it has managed to hang on for a second season and will take over the vacated BTVS slot this coming fall season. Lauren Graham (Lorelai Gilmore) was nominated for a Golden Globe last year and is certainly deserving of recognition, but the unsung player of this show is Kelly Bishop. As Emily Gilmore, Bishop keeps GG from melting into what could otherwise be a syrupy confection. Her emotionally manicured Emily is the perfect balance to Graham's loopy Lorelai and bookish granddaughter Rory (Alexis Bledel).

Other notable supporting players: J. August Richards as Charles Gunn and Andy Hallett as Lorne, both of Angel (WB). Given my soap-box speech about BTVS last week, it probably goes without saying that I think James Marsters as Spike and Alyson Hannigan as Willow both deserve supporting actor nominations from Emmy. They didn't get it. So much for recognizing character development and BTVS's successful treading of the line between drama and comedy.

The Screen Actors Guild gives ensemble awards (Emmy does not), and the category makes all the sense in the world. When there are several actors from the same show nominated in one category, it says something about the nature of a show, mainly that it is the sum of its parts. Of the five Emmy nominees for Supporting Actor in a Drama Series, three of the nominees are from The West Wing: Bradley Whitford, John Spencer, and Richard Schiff. All of these actors do fine work, but what would Josh Lyman be without Toby Ziegler, or Toby without C.J. Cregg (Allison Janney), or C.J. without ... you get the idea. It's impossible to split the performances apart in shows like The West Wing, so why not dispense with the hair-splitting and recognize the show for what it is: one of the strongest ensembles on television.

The ensemble of amazing young actors of Once and Again (ABC) is just as impressive. Heralded by TV Guide as "the best show you're not watching," Once and Again only mustered one major Emmy nomination -- a repeat nod to Sela Ward as Best Actress for her role as Lily Manning. (She won last year.) While I believe Ward and co-star Billy Campbell are fine as the now-newlywed couple, I find myself more impressed by the extraordinarily nuanced work by the young people of the cast. Evan Rachel Wood's work as Jesse Sammler, a pre-teen with anorexia, provided a surprisingly nuanced performance any actor -- young or old -- would be happy to call her own. Her young castmates, particularly Julia Whelen and Shane West, also provide consistently outstanding performances. Hmm ... how about we skip the adults and have a spinoff show featuring just the young people?

High-profile award shows take on more meaning when local folks get the spotlight shone on them. Nominated for an Emmy for Outstanding Animated Program (less than an hour) are Mike Judge and Greg Daniels' King of the Hill (Fox). The 'toon with a Texas twang faces stiff competition from Futurama (Fox), The Simpsons (Fox), The Powerpuff Girls (Cartoon Network), and As Told by Ginger (Nickelodeon).

UT professor and filmmaker and collaborator Paul Stekler and Daniel McCabe found out last week that their film, George Wallace: Settin' the Woods on Fire, was nominated in two categories by the National Academy of Television Arts & Sciences News and Documentary Emmy Awards. Stekler, McCabe, and Steve Fayer received a nomination for Outstanding Individual Achievement in Writing. Nominated with Stekler and McCabe for Outstanding Individual Achievement in Research are coordinating producer Sandra Guardado and associate producer Matt McClung.