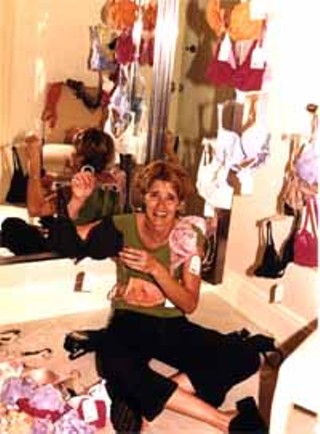 A scene from Tracey Kimmons' "The Perfect Bra," one of the short films entered in aGLIFF's First Annual My Gay Movie Challenge

To be honest, Scott Dinger is feeling a little relieved. He's the artistic director of the Austin Gay and Lesbian International Film Festival (aGLIFF; www.agliff.org), and he's trying to explain what it was like to ask the gay and lesbian public to submit their homemade movies to aGLIFF's First Annual My Gay Movie Challenge. This is what the official announcement said:

Here's your chance to make a movie and actually see it on the big screen with an audience. Go grab some friends and that video camera, yes the one that's been collecting dust, and make your first "My Gay Movie" short.

Think Saturday Night Live parodies, Jay Leno "person on the street" interviews, MTV music videos, animation or ... your chance to make a better short than one you saw at last year's festival!!!

All aGLIFF asks is that it have a queer sensibility about it!!! The short video that you and your friends make will be shown on the big screen -- that is, at the Arbor on June 28th, 2001!

"I had some real concerns," Dinger says now, after receiving more than enough entries (21 of them) and deciding -- along with a committee of aGLIFF board members and volunteers -- which of those entries would become the 10 short movies that will be screened at the June 28 event ($4 aGLIFF members, $5 non-members; 7:30pm, ticket sales begin at 6:30pm). "To be honest, I had no idea. In the past, years ago, we had tried to do what we called a regional showcase, and we weren't really all that satisfied with what we were getting. And so I had some real concerns that we would get a few good ones and then some that people really just almost couldn't sit through. But the one thing I thought was, 'It's not part of the film festival, so it's not as if we're bringing people in and putting it that this is like the rest of our films. ... We're not going to be shocking anyone if there's just some really horrible stuff in there.'"

But then the idea behind My Gay Movie was to solicit strictly amateur movies. Among the 10 finalists are a Blair Witch Project satire titled "The Blasé Witch Project," in which two gay men, one of whom is in denial, and their female filmmaking colleague set out to find "the first lesbian Wiccan dyke witch." "Rowdy Roundup: Night of the Killer Piñata" is described by aGLIFF organizers as "not your ordinary supernatural lesbian rodeo soap opera." "The idea behind this was that if you've never done a film before, that's okay," Dinger says. "It's the person who has had the idea but said, 'Why would I do it?' ... that we would be the reason. They could say, 'Okay, if I do this, it's going to show in a theatre, it's going to show with other films, and there's kind of a reason to do this.'"

Last fall, when aGLIFF board member Carrie Wagner and two other volunteers suggested the idea for My Gay Movie to Dinger, he realized that it was something that would be perfect for aGLIFF. "It was something I was really excited about, because we've kind of turned into this 12-month thing," he says. "It used to be we'd have the two-week festival, and we'd gear up at a certain time getting ready for this, and when it was over, it was over and we would all pat ourselves on the back and go our separate ways and think, 'We don't want to have anything to do with the festival for quite a while now.' Well, that's changed now. We're doing screenings all the time, and we're trying to branch out."

The event at the Arbor will be conducted "MTV-style," organizers say, with spotlights, a video production team engineering the event, and local filmmaker and deejay Jen Garrison as emcee (in keeping with MTV awards shows, particular awards such as "Best Kiss" will be bestowed). "There's a lot of room for growth on this," Dinger says, "but I'm encouraged about what it is."