The Girls on the 50-Yard Line 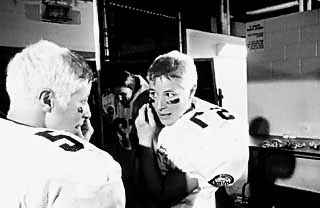 I knew L.A. documentary filmmaker Mylène Moreno when she was living in Austin, before she married Rafe Greenlee (terrific wedding) and moved to El Paso for a year and then on to California. At the time, I thought I knew a lot about her -- she had degrees from Harvard and Stanford, and while she was living here in the Nineties, she worked with and produced the first episode of documentary filmmaker Hector Galán's Chicano! History of the Mexican American Civil Rights Movement series for PBS. But what I never knew about the petite, ever-fit Moreno -- until interviewing her for this story a few weeks ago -- was that she had played serious soccer through college and, deep down, had always really, really wanted to become a professional athlete. Instead, she decided to make a film about two women who did.

True-Hearted Vixens, one of the two films Moreno is bringing to the Alamo Drafthouse next Wednesday, May 30 (and which will show on PBS' POV in July), follows the travails of the 80 women and a few male organizers who came together in Minneapolis in 1999 for a season of six games to try to make a go of a professional women's football team. The film focuses on the stories of two charismatic women who are heroes to the filmmaker because they put their lives on hold to move cross-country to play full-contact, NFL-style football: Jane Bolin, a 24-year-old political consultant and rugby player from Virginia, and Kertia "Moochie" Lofton, a 33-year-old African-American elite amateur basketball player and a single mom with a daughter and a day job as a security officer at a Florida middle school.

Most of the women (with a median age of 27) who tried out for the league had played some flag or touch football before setting their caps for the last all-male sports bastion, but most of their football experience had taken place in back yards with brothers and such, Moreno explained. Of the group, the majority of whom were from the Minneapolis area, there were a few cops, an attorney, an engineer on leave from NASA, and a former Olympian -- "phenomenally great athletes, all," says Moreno.

Of course, just because it was called a "professional" league didn't mean that it was "professional"-- the women still had to support themselves, many taking what Moreno describes as "grueling and demeaning jobs." Moochie cleaned apartments, Jane did some telemarketing, another team member got a job changing oil. A few nights a week, they practiced; the rest of the time, they trained.

Not surprisingly, there were a few clashes between the women serious about playing no-holds-barred football and being taken seriously in the bargain and the organizers with their notions of how best to make the enterprise commercially viable and attract investors. Take the names given to the two women's teams: the Vixens and the Minx. Then the women discover, to their dismay, that a local Hooters is one of their sponsors. The old stereotypes, even with a gender-bending venture such as this. When the commercial side fails to develop legs -- Nike never does sign on as a sponsor, the NFL fails to express the interest in women's football that the NBA did in women's basketball, and game attendance is sparse -- the question arises, is the world ready for a women's professional football league?

Austin Chronicle: What was it about this project that piqued your interest?

Mylène Moreno: I actually read about the league in a short article in Sports Illustrated for Women. This was when I was living in El Paso and pregnant with my first son and had just made a short film about a 16-year-old girl named Maribel who was pregnant with her second baby. I was twice this girl's age, but she was twice as experienced as I was in mothering, and I got to thinking about how alike and different we were and wondering why she, at 16, was in so much trouble? Then I thought about the huge, positive role that sports had played in my life, how important just being a part of the team -- the socializing -- had been and what an outlet it had provided me. It occurred to me that had Maribel had some other things to do during her high school years -- other than hanging out at the mall and looking for her true love -- maybe her life might have turned out differently. Reading about this league forming in Minneapolis fed my interest in girls sports, but it also seemed such an interesting phenomenon -- women crossing this last barrier, football, the men's club. And this was also at the time that there was all this excitement about the Women's World Cup. Documentarian Mylène Moreno will attend the screening at the Alamo Drafthouse on Wednesday, May 30, at 7:30 & 9:30pm.

AC: Were there any surprises for you, following these women?

MM: I was surprised when Jane developed a relationship with another woman, because she had always talked a lot about her boyfriend back home. She herself was obviously totally shocked that this developed, but she was very brave to come out with it on camera. And then her heart was broken.

AC: Were there more lesbians or straight women on the team?

AC: So where are Jane, Moochie, and the WPFL today?

MM: Jane moved back home and is living with her parents, preparing to enter an MBA program and is playing rugby, not football. Moochie decided at the end of the first season that she didn't have the stomach for that kind of football -- she needed to be paid, she's got a daughter to support. She's now a deputy sheriff in Broward Country, Florida, and playing basketball.

As far as the league goes, there are now three leagues. There's been some division in the ranks. We had all hoped that the organizers of the league would have had better contacts and been better equipped to lead this new and national effort, but they didn't have the acumen to pull it off. Since then, there's been a splintering of effort, it remains to be seen whether, with three leagues now going, whether one can emerge as a really serious contender. The original league is ongoing but with new owners.

AC: You're also showing the short "Cormac's Trash," that you produced and your husband Rafe Greenlee wrote and directed, about how the obsessed fans of the elusive, reclusive El Paso resident/writer Cormac McCarthy try to smoke him out, one even going so far as to go through his trash. How did that project come about?

MM: From the moment we arrived, Cormac's presence loomed very large. There was always a lot of buzz about him. We lived near him and were always aware of his presence in the neighborhood, though we never saw him. He was Rafe's favorite author. The film explores Cormac's relationship to El Paso's artists and its literary community. As a lawyer, Rafe was interested in privacy issues, and he takes the position in the film that he's not going to cross the line -- even though the film reveals that others probably have. He was careful about revealing the sorts of things found in Cormac's trash. He didn't show all of what was in there.

True-Hearted Vixens and "Cormac's Trash" will be presented as part of the Texas Documentary Tour on Wednesday, May 30, 7:30pm & 9:30pm, at the Alamo Drafthouse, 409 Colorado. Filmmaker Mylène Moreno will introduce the film and conduct a Q&A session following the screening. Advance tickets are available for Austin Film Society members only by calling 322-0145. Tickets will go on sale at 6:15pm on the day of the show. Admission prices are $6 per show for the general public; $4 for Austin Film Society and KLRU members and students. The Texas Documentary Tour is a co-presentation of the Austin Film Society, the University of Texas RTF Dept., The Austin Chronicle, KLRU-TV, and SXSW Film.