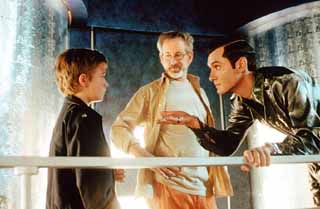 A.I., starring Haley Joel Osment (l) and Jude Law (r), owes as much to director Steven Spielberg as it does to Stanley Kubrick.

A film from Spielberg and Kubrick together?! Isn't that like teaming Apollo, god of the sun, with Pluto, lord of the underworld? Roy Rogers and the Man With No Name? ET and the HAL 9000?

Well, yes, and that's precisely why A.I. is one of the most widely anticipated films of 2001. It's only fitting that Kubrick should have a film released in this year with which he is so widely identified -- and if you think the director's death two years ago means this can't be his film, well, you need to know a little more about it.

Kubrick began developing A.I. as a film back in 1983, when he purchased the rights to Brian Aldiss' "Super-Toys Last All Summer Long," a story about a mechanical boy with human feelings. Over the next 15 years, he drafted several writers, including Aldiss, to shape a script and commissioned more than 1,000 storyboard illustrations from comic artist Chris Baker to map out his vision of a world flooded by the melting of the polar ice caps. He even tried building a real robot to star in the film. He did just about everything but shoot the thing, and he was set to do that after Eyes Wide Shut, when he suffered a fatal heart attack.

With Kubrick's passing, the film might have been one more legendary "what-if" movie project, but in the months following his death, the director's wife Christine and his brother-in-law Jan Harlan suggested that the film be made with Spielberg directing. Given Kubrick's and Spielberg's opposing sensibilities, the choice might seem odd, but the idea actually came from Kubrick himself. He had been discussing the project with Spielberg since the mid-Eighties and thought the story well suited to Spielberg's personality and mastery of special-effects sagas. Spielberg declined, not wanting to cheat his friend and directorial idol out of what he was sure would be a commercial hit. But after Kubrick died, he took on A.I., hoping to realize the dream his colleague had labored over for long.

The completed A.I. owes as much to Kubrick as Spielberg. For the screenplay, Spielberg had access to more than 900 pages of Kubrick's fax correspondence about the project. He has said he felt Kubrick's ghost with him as he wrote the script and with him on the set every day. Some 600 camera shots can be credited to Kubrick, as Spielberg based them on storyboards that Kubrick commissioned. "I wanted to get as much of what Stanley wanted upon the screen as I possibly could," he told the Los Angeles Times.

Some even sense Kubrick's hand in A.I.'s sophisticated online marketing campaign, which includes coded messages in the film's trailers and an astonishingly complex view of its future world through more than three dozen interlocking Web sites, e-mail addresses, and phone numbers with recorded messages. "It's unprecedented, this vast network across multiple media," says Ain't It Cool News' own sentient machine Robogeek. "Kubrick was always very hands-on with marketing. How integrated is this into the design of the film? How involved was Kubrick? Or is Spielberg?"

A.I. is rife with tantalizing questions, not the least of which is: What about this project so fascinated Kubrick? Given his penchant for secrecy, we may never truly know, but Sarah Maitland, the last writer to work with Kubrick on A.I., has said that he "wanted people to shift to a more positive view of A.I.," that Kubrick was "fascinated by artificial intelligence and fond of robots, which he regarded as a more environmentally adaptable form of human being." With that in mind, A.I. can be seen as a continuation of the story Kubrick began with HAL in 2001, and also an optimistic response to it. Sentient machines are the next step in humanity's future, perhaps in its evolution. But they aren't all ruthless astronaut murderers. Don't fear them. Accept them. We're all in this together.

Gee, what an uplifting message -- one worthy of Spielberg. And in 2001, no less.