A disturbing comedy that is both hysterical and wicked. 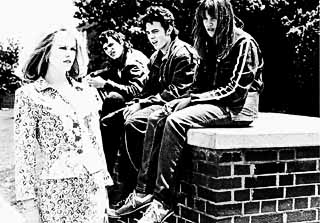 "You're not anybody in America unless you're on TV," says Suzanne Stone Maretto, the woman who describes herself as "like Lady Di before she dropped the prince and went nudist." To Die For is Nicole Kidman's crossover film, taking her from "wife of" status to major A-list actress. Suzanne Stone, loosely based on the real-life Pamela Smart, is the most self-absorbed woman on earth. From offering unwanted beauty advice to her future sister-in-law (including the statement that Gorby would have done better in Russia "if he'd had that big purple thing taken off") to admitting that she is like Jane Pauley ("but we don't have to struggle with the weight problem like she does"), Suzanne Stone is a delicious character study of a conniving and deeply superficial young woman who will stop at nothing to achieve her dreams of international stardom. When she meets Larry (Dillon), a handsome down-to-earth guy who falls hard for her, she takes him "from Van Halen to Jerry Vale," according to his sister Janice (Douglas). Life with Suzanne isn't quite as fairy tale-ish as Larry planned it -- when he brings up the subject of children, she cuts him off, saying, "If you wanted a babysitter you should have married Mary Poppins." Suzanne realizes the marriage is a mistake but uses the opportunity to further herself. Dressed to kill and clawing her way to the top, Suzanne enters the lives of three disenfranchised teens -- kids who would not be able to tell you what their aspirations were if they knew what the word meant -- on whom she gratuitously practices her powers of manipulation. "The road we chose to travel on was paved with many speed bumps," she tells them, as she involves them in her scheme to murder her husband. Besotted with this glamorous figure, the teens do as she commands. In one of the most hysterical scenes in any movie, Suzanne brings a record player to the funeral and mourns to the song "All by Myself" in front of the crowd. But of course, under ceaseless pressure from the authorities, the teens begin to crack. Folland, as the young teen girl, has a heartbreaking and hilarious confrontation scene at the mall with her monstrous mentor, and she nails her portrayal of the confused adolescent perfectly. Van Sant's direction is quirky, lively, and more than a bit sarcastic. In scenes such as the masturbation fantasy, Van Sant (Drugstore Cowboy, My Own Private Idaho) is at his best visually and conceptually and has created a complex and compelling film. To Die For sets forth immensely disturbing issues but also manages to be a comedy that is both hysterical and wicked.