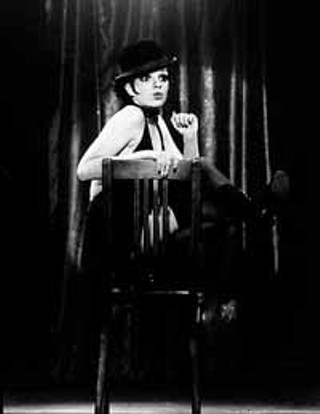 "Divine decadence, darling" -- that's what's served up in Cabaret. I was in junior high school when Liza won Best Actress for her performance as Sally Bowles -- and I was furious because I thought Diana Ross got robbed. I knew, with my consummate adolescent insight, that Liza was merely playing herself in Cabaret, but that Diana was acting her little heart out in Lady Sings the Blues. Time has told a different tale, however. Lady Sings the Blues has been consigned to ignominy, and Cabaret remains a sparkling achievement in moviemaking. Winning eight Academy Awards in a tight race against such blockbusters as The Godfather, Deliverance, and Sounder, Cabaret is Liza Minelli's tour de force, a role of a lifetime. Even her mother, Judy Garland, never had a role like this, so exquisitely tailored to her talents that even Liza had a tough time topping this performance. In fact, she never did, starring in some truly dismal films -- Lucky Lady and New York, New York. In Cabaret, Minnelli plays Sally Bowles, a plucky little trollop who sings at the Kit Kat club in Berlin, during the time of the Weimar Republic. Sally tries very hard to be "an international woman of mystery," but she lives in a fantasy in which her nonexistent worldly and dashing father will soon swoop down and rescue her. She falls in love with Brian (York), a charming, bisexual scholar working as a translator. They are both romanced by a wealthy and handsome suitor (Griem), who, after stirring their dreams and passions, leaves them flat. The subplots -- including Brian's students, the couple's fellow boarders at the rooming house, and Sally's various schemes -- provide an opportunity for wonderful music and staging. Most of the numbers happen onstage at the Kit Kat club. We have addressed the issue of performances within performances before -- and the usual question is "Who would pay money to see this?" But in Cabaret, the staged musical numbers are spectacular, and you would definitely pay good money to see nightclub performances like these. "Money" and "Mein Herr" are incredible, and Bob Fosse's outré choreography is stunning. The costuming and make-up add to the heightened surrealism, and the Nazi threat adds an element of danger and desperation to a movie that would be hard to classify as a musical, drama, comedy, satire, or war movie. The violence of the Nazis, with a few exceptions, is shown by implication and suggestion rather than graphically depicted. The "Tomorrow Belongs to Me" number is roundly described as stunning and chilling, and after almost 30 years, remains so. The story itself is enduring and became a recent hit on Broadway directed by American Beauty's Sam Mendes.