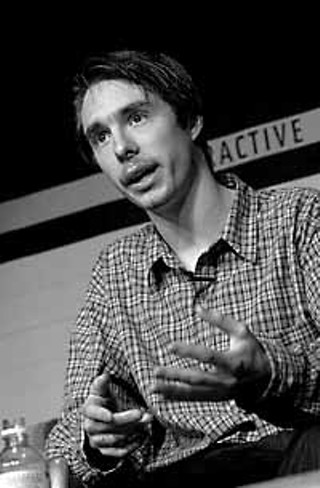 "What's the model?" shouts the persistent man in the audience. He repeats his question, asking how exactly musicians, artists, and companies will make money when everyone attempts -- often successfully -- to grab what they want for free on the Internet.

SXSW Interactive keynote speaker Ian Clarke, developer of an anonymous system that could facilitate such theft, remains unfazed. It's clear that money isn't a big concern for him, and he sticks with one of his driving mantras. "I don't think information is property, and thus I don't think it's possible to buy it, and therefore, it's not possible to steal it." Clarke -- a lanky guy that fits the stereotype of a pale, withdrawn programmer -- is a darling of the SXSW Interactive Festival crowd, although many aren't sure what to make of the future of his pursuits, namely Freenet. A 24-year-old native of Dublin, Ireland, Clarke created Freenet, a peer-to-peer system where users get and send information from computer to computer.

In general terms, Freenet is somewhat similar to Napster but with one huge difference -- all information transfers are completely decentralized and anonymous. No one knows where information is stored at any one point, since that information moves from computer to computer. With each move, the information also is encoded. The system leaves none of the typical electronic trails that make Internet transactions traceable. It's also similar to another peer-to-peer system, Gnutella, but with a couple of differences in how information is transmitted. (For more information, see www.freenetproject.org.)

For the idealist, Freenet is a means to ensure freedom of speech and evade censorship. If you don't know who's publishing information and where it's coming from, how do you stop it? For others, however, it's simply a potential monster that would allow users to trade (and thus steal) music, literature, software, videos, and other "intellectual property." Clarke offers a proud little smile when relating his baby's best feature -- it's impossible to destroy. "You'd have to shut down every computer in the world," he says. Freenet's simple structure and decentralization also defends it against many of the common attacks the Internet falls prey to, and Clarke says he doubts if even the top programmers at the National Security Agency could break its anonymity. All of this leaves Clarke with a feeling of incredible immunity against personal attack. Even if recent attempts are succeeding at holding people accountable (financially) for the software monsters they create, Clarke has no future control over what he's created, and he doesn't have deep pockets. So he can't help but laugh off much of the criticism lobbed at him.

"He's great ... he's an anarchist," says one SXSW attendee, who flops on the stage and waits to talk with Clarke after his speech. But Clarke is anything but an anarchist. In fact, he sounds like a pure capitalist with a rather traditional view of the power and use of ideas. On the political side of things, he stresses that great oppressions of society always have been accompanied by or even driven by censorship. Therefore, Freenet is the ultimate guardian for keeping people free. As for economics, Clarke says a variety of other models are available to properly compensate people for their ideas, such as sponsorships from patrons or voluntary payment.

Currently, he's living in Santa Monica, Calif., working under the company name Uprizer. The company's mission is secretive, but it likely revolves around improving the viability of a Freenet-type system for broader use and for users who are technically challenged. The current system requires a download and a keyword system of retrieval and submission that search engine users are unaccustomed to. (Although there is a Web browser interface now that make the process easier.) And aside from all the politics, economics, and social dialogue surrounding Freenet, Clarke also sees potential in its efficiency, since it's a scalable system that could be a much more effective use of resources.

It will be interesting to see what commercial creation comes from someone often seen as a champion of "free." Until then, Clarke says he enjoys making the rounds offering his perspective. Although he often discovers people trying to incorporate him into debates around music trading, he freely admits that is outside his scope of expertise. "It's interesting when people listen to you," he says. "But it's scary when people listen to you talk about things you know nothing about."