The Luckiest Girl in the World

The voice on the phone is girlish and instantly recognizable, so affable and full of good cheer it is as if an old friend has appeared from the past. That's no surprise. Sissy Spacek has built a memorable film career playing characters we know, would like to know, and (at least twice) are glad we don't know. From her first starring role in Terrence Malick's Badlands in 1973 to her acclaimed performance in this year's Sundance favorite In the Bedroom, Spacek's body of work is a tribute to her choices in roles and scripts, including Carrie, Welcome to L.A., Raggedy Man, The River, Crimes of the Heart, The Long Walk Home, The Grass Harp, and The Straight Story.

Spacek's career is also notable for the number of biographical roles she has undertaken, roles close to her heart. She portrayed Carolyn Cassady in Heart Beat, Marie Ragghianti in Marie, Liz Garrison in JFK, supplied the voice of Martha Jefferson in the documentary Thomas Jefferson, and won an Academy Award for playing Loretta Lynn in 1980's Coal Miner's Daughter.

That's the beauty of acting in movies. Film visually freezes the actor in the role and thus the enduring appeal of the screen image: Think of Spacek in Carrie when the pig's blood hits, wowing 'em on the Opry stage as Loretta Lynn, or the reflection of Rose's stricken face in a window in The Straight Story. For Mary Elizabeth "Sissy" Spacek, the journey from her birthplace of Quitman, Texas, to her ranch in the foothills of the Blue Ridge Mountains has resulted in artistic gratification and personal satisfaction. Today, Spacek lives in Virginia with her husband, director Jack Fisk, and their two daughters, Schuyler and Madison. She will be presented with a Texas Film Hall of Fame award by her cousin, actor Rip Torn.

Austin Chronicle: You have a long and quite prestigious acting career. It almost seems like you hide in plain sight, but I wonder if that's because you're not in the tabloids.

Sissy Spacek: You know, you're always holding your breath, hoping you don't make the tabloids! [laughs] In terms of my career, the script has to be something I respond to as well as the character. And, of course, the director -- it's a director's medium, because he or she is in control of the whole project.

The more movies I've made, the more characters I've played and the older I get, I just keep looking for something different. I'm well known for not making "career moves." [laughs] I go with my gut.

AC: Are you really looking for something different? It seems to me that you seek a common quality of the roles.

SS: That's interesting ... In the sixth grade, one of my teachers introduced me to biographies. I spent the next year reading all the biographies on strong women I could -- Clara Barton, Helen Keller, Florence Nightingale -- it was a real turning point for me.

I've always been inspired by strong women, and Texas has amazingly strong women. From Jane Long to Ima Hogg, Lady Bird Johnson ... the list goes on. They come from every socioeconomic level, from pioneer women to politicians, the state is filled with them.

One thing I felt as a young actress starting out and even as a child, I was so wounded by many of the stereotypical Southern portrayals in film and television. More the sitcoms like Green Acres and The Beverly Hillbillies and Hee Haw, that kind of stuff. I mean, Texas is the South, but it's the Southwest too. It's different.

SS: Right, yes. So there was that pioneer spirit, that grit in the women in Texas. There's an entire world within the state.

AC: Don't you still have a lot of family in Texas?

SS: Oh, yes! My maternal grandmother was from Mississippi and my grandfather from Iowa, and they settled in the Rio Grande Valley. My great-grandfather on my father's side came over from Moravia when he was 13 -- that's Rip's side too. We haven't been here for forever but we certainly claim the state.

My great-grandfather worked to bring the rest of the family over and they settled in Granger, Taylor. All around Central Texas and Austin. So I love both areas, the Valley and Central Texas. 'Course, I grew up in Quitman, Northeast Texas. My husband laughs and says whenever I get anywhere near Texas, my accent thickens, and I begin to feel very safe. 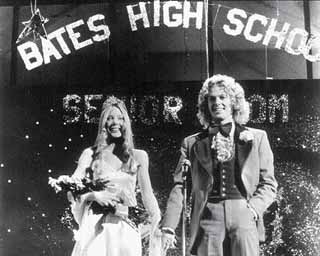 Spacek was not director Brian De Palma's first choice for Carrie. During the screen test, "I was hanging on by my fingernails," she says.

AC: Do you start using the words "fixin' to" a lot? I find the accent helpful in, say, New York City. And good manners.

AC: I like the way you talk about your family history. My mother and I are into ancestor worship. We're on genealogy mailing lists, etc.

SS: Isn't it weird how that sort of washes over you at a certain age? You don't even give it a thought until one day there's this panic to get everything down in writing! That it is important.

AC: It's true. You feel completely different when you're young.

SS: When I was a little girl, I remember thinking, "I am the luckiest girl in the world!" I was born with this mother and father. In this town, in this county, in this state. To me, it was the center of the universe. It was the most wonderful place to grow up.

AC: I talked to your cousin Rip Torn last week [see sidebar], and he expressed much the same sentiment, the connection to Texas, that sense of pride and identity.

SS: It's like being a member of a very exclusive club.

AC: Can I ask you about Carrie?

SS: No! Where did you hear that?

AC: [sheepish mumble] My brother said he read it somewhere. He's picking the clips for your "Hall of Fame" induction. If it's not true, then I just blew my question.

SS: Well, what Brian De Palma did was to get a group of young actors together, and we would read for different roles. I thought I was pretty good as Chris. Evidently he didn't. Then he tested a lot of other actors for more than one role, including Carrie. Actually, I wasn't Brian's first pick there either, so I was hanging on by my fingernails.

SS: [laughs] I don't remember. Three or four of us screen-tested for Carrie, and I remember she was good. But not her name.

With Richard Farnsworth in The Straight Story -- a minor, but unforgettable, role

AC: What a role! It still defines your career as much as Coal Miner's Daughter.

SS: I really loved Coal Miner's Daughter as well. I'm almost embarrassed I got so much attention for that film. It started with a great character, Loretta, and then George Bessie wrote the book that so captured Loretta's life, it was miraculous. Then Tom Rickman came along, took that book, and wrote a great script. Then an Englishman came along, Michael Apted, and directed a wonderful film. And that film would have been nothing without Tommy Lee Jones.

SS: Yeah, my character would not have been what it was had it not been for Tommy Lee Jones. It really was a magical situation where all the elements came together, including Beverly D'Angelo, who played Patsy Cline, and Levon Helm as Loretta's daddy. I got so much of the attention, but it really was everyone who made the film what it was. They kind of lifted me up on their shoulders.

AC: Raggedy Man is lesser known but not less a film. What do you remember best about it?

SS: I love that movie. Just love it. There are wonderful scenes, the scene dancing with the broom ... they couldn't use that in the video because the studio couldn't get rights to "Rum and Coca-Cola." [laughs] Leave it to the studio, right?

One of the many things I remember about the film was the first day was the actors' strike. It went on and on and on. We were in Austin for six weeks. We waterskied up and down Town Lake a lot! And we shot the film in Lockhart. That was enough time to settle into the little house, have the weeds grow up around it, so we had the opportunity to feel like we lived there, to get to know the area. And that made a difference with the character.

Bill [Wittliff] is such a fabulous writer. He had created such interesting characters. I'm sure that script was inspired by things in his childhood, memories he had of growing up in Texas. There are things that get me every time I see it, like when Eric Roberts is leaving town.

I love the kite scene from Raggedy Man. Eric Roberts is flying a kite with the two boys, and he gestures for her to come over as she's hanging out clothes. Finally he convinces her, and she walks out from underneath the clothes and stops, looking at her reflection in the window, fixing her hair. I took that right from my mom. I remember her doing that when I was little.

AC: The praise for your roles never seems to stop for you. Didn't you just get good notices at Sundance?

SS: Yes, it was for a film called In the Bedroom. They took it there in hopes of getting distribution, and Miramax picked it up. It's by a very talented filmmaker named Todd Fields, who's a writer-director. It's his first feature and had an ensemble cast, including Tom Wilkinson, a wonderful English actor who was in The Patriot, and Marisa Tomei, and a young Texas actor named Nick Stahl. He was first in Man Without a Face, and he is fabulous! I think the star is the director. I'm glad I got to work with him first. Now he owes me!

AC: The Texas Film Hall of Fame is honoring you for all the work you've done, and your cousin Rip will be inducting you. I talked to him for a while last week. What a hoot!

I remember him from the old days. He was the most gorgeous, heartthrob movie star, it was so exciting to have him in the family! One particular Christmas, I got a little white rabbit fur collar and muff. God knows you don't need such things in Texas! And I got a little rabbit that you wound up, and it jumped around. We have a home movie of that and Rip and my brothers and cousins playing football in Granger. We have a pretty exotic family, I have to say.

I have a lot of family around Austin, so does Rip, so it's always good to come to Austin, particularly for an event like this. A great honor. Do we really get to wear blue jeans?

AC: Anything but a pink prom dress. A tux with cowboy boots will do for the men.