The Chord That Binds: The George Washington Score 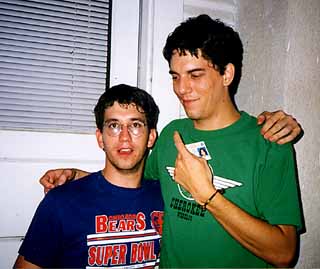 George Washington is an intensely moody piece of work, striking a slow, deep, resonant chord that lingers far longer than expected. About six minutes, to be precise. And this one chord, a slow-gathering, heavy mass of sound, envelops the opening sequence and sets an introspective tone for the remainder of the score and the film.

And though George Washington was shot in semirural North Carolina, its evocative score had its genesis in writer/director David Gordon Green's home state of Texas. Green lifted the musical opener from Abandinallhope, a 1997 album from Mazinga Phaser, a troupe of lysergic rockers from Denton, whose drummer, Mike Throneberry, went to high school with Green in the North Dallas suburb of Richardson. Green, a fan of the group's music, received permission to use the track and went about finding talent to produce a score with a similar dreamlike mood. So he turned to David Wingo, Green's lifelong friend and Jester roommate at UT, where the director spent his freshman year before enrolling in the North Carolina School of the Arts.

Wingo, an RTF graduate who had studied audio production at UT, had turned Green on to the work of his friend Michael Linnen, whose band Monroe Mustang was recorded in the studio as Wingo's final project for an audio production class. But it was Linnen's work with the Pilot Ships, an atmospheric/ ambient group that includes Linnen's brother Chris (also in Monroe Mustang and an employee at the Chronicle), that fascinated Green. So Wingo showed the trailer for George Washington to Michael Linnen, who was immediately enthusiastic about working on the score.

"Wingo's a good friend, and I knew about Wingo and David Green's history, and so I had a lot of trust," says Linnen. "But I was really kind of shocked when I saw the trailer and how good it was.

"Just kinda talking to David about movies and music, it seemed we had kinda a lot in common in terms of our general aesthetic. I was pretty in step with him on what he wanted to do."

The original plan called for Wingo himself to contribute just one song, the rousing Will Oldham-style celebratory gospelly strummer that closes the movie. But the three of them decided it would be prudent for Wingo to pair up with Linnen on the project, so Wingo delayed a planned move to San Francisco and in September of 1999, the duo recorded a number of compositions in Linnen's home studio that ranged from minimalist drones and funereal pipe-organ songs -- including an eight-minute, three-chord workout similar in mood to the film's opener -- to a pair of situation-specific tunes that were far more loose and gritty.

Green's presence was felt throughout the process as he logged daily phone calls to guide Linnen and Wingo toward his ultimate vision.

"He would say, 'I want this kind of a mood, this kind of a song' and throw out references to everything from Motown stuff to Labradford to Philip Glass and everything in between," says Linnen. "I would try and decipher that and make a couple of demos and send those off to him, and he'd say 'too evil' or 'a little bit less gloomy' or 'a little bit less funky' or whatever."

The score's shining moment, however, came about in a far more haphazard fashion.

As Linnen was putting the finishing touches on his tracks, fellow Pilot Ship Brian McBride, a former Austin resident now based in Chicago, sent Linnen a cut intended for use on the Ships' next album. Linnen listened to the piece, a riveting series of melodic fragments punctuated by neuron-shaking sonar blips, and immediately shipped it off to Green. The cut, dubbed "Pilot Suicide Theory," runs during one of the film's most dramatic scenes and appears on the Pilot Ships' recently released The Limits of Painting and Poetry.

Wingo is currently working part time and composing commercial music on a freelance basis from his new home in Seattle, where he rooms with members of former Austin band Maximum Coherence, two of whom who also worked with him on George Washington's closing song. Meanwhile, Linnen is gearing up for a Pilot Ships gig at SXSW, which will mark the band's first live appearance since 1998, and is eagerly anticipating Green's next move.

"I can't wait to see what he does next, with a less on-the-fly kind of movie."

The Pilot Ships will perform Thursday, March 15, 9pm, at the Ritz Lounge as part of South by Southwest.