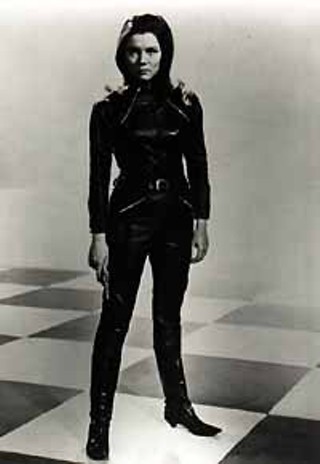 No. 7 Diana Rigg as Emma Peel

They're rough and tumble, with high-caliber style and maybe just a touch of attitude. They're chicks, grrrls, and dames who kick serious ass. I've recently run across several Top 10 lists from various sources (most notably, E! Online) that rank them, and I thought it was time to prepare a list of my own. My criteria includes "kickassability," and whether they have that special "umph" you can't quite put into words -- call it the Seinfeld-ian "kavorka," starpower, or just plain likability -- but you won't find any out-and-out sweetie pies on this list. That means Lynda Carter's Wonder Woman and the Charlie's Angels aren't on here.

See how my choices compare with yours.

Hey, she's the slayer. Need I say more? Poised, vulnerable, and sometimes a little ditzy, Gellar is the tops on my list. Kickassability: a solid 10.

She's the only villain on this list, but oooh, what a deliciously evil one. Whether she's tormenting Buffy or throwing down demons for play, this young woman is so good at being bad. Kickassability: 10

Never heard of her? That's because we're still waiting for the launch of this new series, which had its terrific pilot episode last year with a promise of a 2001 series. Think of Sara Pezzini as the urban version of Buffy. Kickassability: 9

These tykes crack me up, even though their eyes freak me out. If sugar and spice were served up this sweetly when I was a kid, I, too, would have wanted to save the world before bedtime. Kickbuttability: 8

I have to admit, I haven't seen enough of Dark Angel to form a solid opinion on Alba. The pouty moods are a yawner, but she's got good moves. Kickassability: 9

Angie Dickinson showed me you could be "old" (i.e., my mother's age) and still be sexy. How does she make that smoldering look? It was something I tried but could never master. And wow, did she look hot in white. Kickassability: 6

I have to admit, in The Avengers' heyday, the wry humor of the show went right over my head. Still, Diana Rigg was sleek and cool, in a royal kind of way. Kickassability: 6

Sure, Xena's past her prime, but she deserves a place on this list. Kickassability: 5

Another cartoon cutie, like the Powerpuffs, only this one isn't a superhero; she's just a down-home Texan who's taken up residence with the other sea creatures at Bikini Beach because, hey, she wanted to. Sandy earns my vote for her old-style karate moves. Kickassability: 5

For as much as I've heard and talked about this show, I can't honestly say I've seen it. But her line, "You're under arrest, sugar," is about as funkalicious as you can get. The Afros and long boots are a big plus, too. Kickassability: 5

Last week's ratings showdown between CBS's Survivor and NBC's super-sized Friends (followed by 20 minutes of Saturday Night Live) added some slap-your-thigh humor to the reality craze. SNL showed good spirit, mocking both Survivor and NBC, with clever opening credits that featured SNL cast members in various stages of outdoor ruggedness and the tagline, "13 cast members, 20 minutes, one frightened network." From there, it went downhill. Not that 20 minutes of SNL is bad, it just couldn't compare with the "spinning wheel of creepy foods" challenge over on Survivor. Team members had to spin a giant Lazy Susan with servings of creepy-crawly outback treats. Whatever dish stopped before them had to be eaten in order to score points. Mmmm, cow brain ...

Conservative media watchers and pro-family advocates have criticized Temptation Island for being morally bankrupt and promoting promiscuity, tooth decay, brittle bones, bad breath, and everything else foul and repugnant. Fox has defended its program from the beginning -- conveniently developing amnesia of the network's promise to stop airing sensational drivel like all those When Animals Attack! specials to the fiasco known as Who Wants to Marry a Multi-Millionaire. Now, according to a Feb. 5 article by David McGuire in Salon, Fox TV has decided to take the moral high road.

The article states: "In a baffling display of situational ethics, Fox TV refused to allow the makers of a female contraceptive called Encare to advertise on Fox's raunchy reality program, Temptation Island. ... The refusal was particularly galling given the content of the show, [Encare ad exec Al] Kestnbaum said, pointing out that in the Temptation Island episode on which Encare was seeking to advertise, two contestants were booted when it was discovered that they had a child together out of wedlock."

Fox execs reportedly told Kestnbaum that the network has "a blanket policy banning ads for most types of contraceptives" and that "the network would only run contraceptive ads if the products were primarily designed to prevent the spread of disease."

In other words, is the policy meant to say that the network doesn't want to intimate the advocacy of sex outside of marriage? Well, good thing they set that straight. What's next for Fox? Naked newscasts? Hey, just remember -- you heard it here first.

If you don't have time to tune in to Survivor, Temptation Island, The Mole, or to log onto Web sites that offer episode updates, tune in to Kathy Griffin's So-Called Reality. It premiered on MTV Sunday and features comedienne Kathy Griffin and a panel of "experts" (friends and relatives) commenting on clips from the previous weeks' episodes of the aforementioned shows. The show airs Sunday at 9pm on MTV with encores throughout the week. Check listings for encore air times.