Hoping to capitalize on the success of Tobe Hooper's 1974 surprise horror hit Texas Chain Saw Massacre, Future-Kill reunited that film's stars Neal and Burns and aimed for a similar creepy / kitschy vein. It failed.Meat Loaf quits his day job to become the world's best roadie. Sound weird? It is. 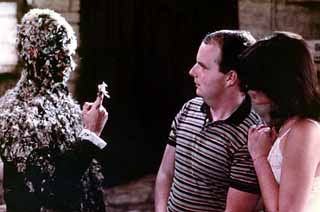 Ever want to be in pictures? No? Liar. Lucky for you, you live in Austin, where there's always a new film project percolating. Some of those films -- Blood Simple, What's Eating Gilbert Grape, Dazed and Confused -- have indelibly inked themselves in film history and audiences' hearts; some were less memorable. Hell, some of them just plain stank. Over the years, Chron staffers have managed to weasel their way into more than a few films and with a few notable exceptions (see the Screens section for a reminder of Editor Louis Black's cameo in Slacker), they've been the ones that stank. These cringe-inducing titles may have gone to the dusty back shelves of local video stores ... but they're not forgotten. We won't let our co-workers live them down.

D: Ronald Moore (1984); with Edwin Neal, Marilyn Burns, Gabriel Folse, Wade Reese, Barton Faulks, Rob Rowley, Craig Kanne, Alice Villarreal. Hoping to capitalize on the success of Tobe Hooper's 1974 surprise horror hit Texas Chain Saw Massacre, Future-Kill reunited that film's stars Neal and Burns and aimed for a similar creepy/kitschy vein. The result was something less stellar but still good for laughs (mostly unintentional). Shot darkly in a largely unrecognizable Austin, Future-Kill details one grisly night in the lives of five frat boys and their Sig-Ep prez, Clint. A practical joke against the rival Fijis incenses Clint, who's just trying to keep the peace; as twisted penance, he demands his brothers traverse to the wrong side of the tracks and kidnap a mutant. "A mutant?" you say. That's right, a mutant. Seems there was a big fire at the nuclear plant a couple years back, and, in protest, liberal-minded folk decided to move to the other side of town and dress like "mutants" -- their notion of what a fallout-fried victim would resemble (which looks an awful lot like a hodgepodge of glam/punk, Eighties-style). The mutants may seem tough, with their blue eyeshadow and artfully ragged fishnet stockings, but they're mostly a peaceful people, led by earnest crusader Eddie Payne. However, one among their ranks is not such a pacifist, the quite literally mutant Splatter. The victim of radiation poisoning, Splatter provides most of the kills in Future-Kill, ensconced in his steel caging and wielding a terrifying blade-for-hand (like a three-prong icepick). Splatter's got a big ole atomic bug up his butt, understandably so; it's doubtful disfigurement-by-nuclear-poisoning would sit well with anyone. He's lost half his face, both his arms, and, well, another precious member suffered some damage, too (no, we don't get a look at it, thankfully). Splatter sees it as his mission to splatter out as many humans -- or "Zods," perhaps a reference to those Izod shirts? -- as he can get his fearsome claws on. So the frat boys hit Splatter's side of town, they rumble, and activist Eddie Payne gets sliced and diced ... by Splatter. But the mutants mistakenly blame the Frat Five, which used to be six, before Splatter decided to permanently remove Clint from office. Panic ensues, and the frat rats must spend the night fleeing from Splatter and some angry mutant mobs. The message gets a little confused here: Are we really supposed to root for frat boys? In between keg stands and gangbanging, they make Splatter almost palatable. Future-Kill tosses up lotsa gore, unabashedly "money" breast shots, and a delightful synthesizer score to boot. It's low-budget hilarity, the kind best viewed with a full tank of booze (and tailor-made for lampooning by the Drafthouse's Mr. Sinus set). And by the way, that's Chron Arts Editor Robert Faires playing the dweeby Fiji president who gets tarred and feathered. The "tar" mix of Karo syrup and black house paint seeped through his coat and gave him a nasty, monthlong burn. But, like a true slave to art, at least he got the shot.

D: Alan Rudolph (1980); with Meat Loaf, Kaki Hunter, Art Carney, Hank Williams Jr., Roy Orbison, Blondie, Alice Cooper, Asleep at the Wheel. The credits alone are enough to boggle the mind. This Eighties slapstick movie about roadies and romance stars pug-faced rawker Meatloaf and was written by the Chron's "Letters at 3am" scribe Michael Ventura, along with former Austinite and E! network founder Big Boy Medlin. It was produced by Zalman King (o ye of soft-core porn peddling, via Red Shoe Diaries) and directed by Alan Rudolph, who's now respected for cinematic paragons of stately reserve and passion brought to a near-boil, like Afterglow and Mrs. Parker and the Vicious Circle. And don't forget the veritable deluge of notable cameos here, including Roy Orbison, Hank Williams Jr., Blondie, Alice Cooper, and Asleep at the Wheel. Even a three-second crowd pan with our own Margaret Moser! Yup, the credits alone are enough to suggest one rollicking good time from these wildly disparate talents. Upon actual viewing of Roadie, I admit to being something less than rollicked, but damned if Roadie didn't try with all its cornball might. It's shot with the campy fun and soft-focus sheen of a Seventies sexcapade film like Kentucky Fried Movie, a pretty obvious influence for this half-baked hoedown. Ventura and Medlin fashion a hillbilly-goes-Hollywood story, as good ole boy Travis W. Redfish (Meat Loaf) leaves his day job as a Shiner beer deliveryman to travel around the country as the fastest roadie this side of the Rio Grande. Travis never meant to leave behind Shiner and Daddy (a truly bizarre but ever-crotchety Art Carney) for the open road; he kinda got schnookered into it, by way of a massive blow to the head and the irrepressible feminine wiles of Miss Lola Bouilliabase (Hunter). Lola's got groupie fever and is positively sick with Alice Cooper-consumption; Travis has got it just as bad for Lola. So they do the roadshow circuit together, as Travis begins to see beyond Lola's Daisy Dukes and come-hither cat screech to find the wounded child within (literally -- Lola reveals she's only 16). She in turn recognizes Travis to be the big lovable lug he is. Breaking down the plot beyond this gets more difficult -- not much happens, or rather, an excess of stuff happens without making much sense. But at least it makes an impression. Right off the bat, Roadie positions itself as something left-of-center (in the opening scene, Daddy Redfish tools around in some steel cyber-horror of a wheelchair while Sister Redfish accidentally vacu-sucks her pot-bellied boyfriend's dick into a Hoover attachment). From there things just get weirder. Way weirder.