Director E. Elias Merhige on 'Shadow of the Vampire' 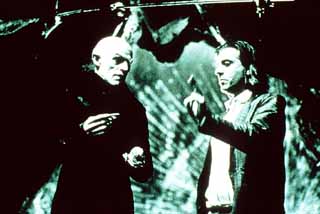 Director E. Elias Merhige (r) and Willem Dafoe on the set of Shadow of the Vampire, opening Jan. 26.

Cinema pumps images into our souls just like hearts pump blood to our bodies. The flickering pulse of the images create physiological reactions that make our hearts beat and our blood rush. One of those eternal images belongs to Count Orlock, the vampire émigré who looms atop the docking death ship in F.W. Murnau's 1921 classic Nosferatu. It's an unforgettable image, filled with fear and sorrow. The German actor Max Schreck, so ghastly and inhuman -- and so different from Bela Lugosi's later suave, continental Count Dracula -- conveys the vampire's unique loneliness and malevolence through this one pose. He towers over his floating morgue, a sinister lord of the underworld who has risen up to conquer the living.

Murnau's Nosferatu, the cinema's first true vampire film, is an atmospheric gem whose expressionistic, resonant images are still capable, 80 years later, of raising fresh goose bumps on our flesh. Although Nosferatu remains in repertory circulation, where it is frequently shown and studied, less information is known about the movie's Count Orlock, the actor Max Schreck. Nosferatu is certainly Schreck's most memorable role.

This lack of biographical detail surrounding Schreck is used as the bedrock for Shadow of the Vampire. Steven Katz's script uses the idea that the authenticity-obsessed Murnau hired the ultimate Method Actor: The movie supposes that Schreck was a real vampire who would only appear in character and only perform at night. This most monstrous of lead actors soon begins sucking the cast and crew dry. Corpses pile up while Murnau struggles to finish his film before the film finishes all of them.

"I used Murnau shamelessly as a metaphor," says Shadow of the Vampire director E. Elias Merhige. "Certainly there are a lot of historical facts laced in there, but I am not pretending that this is true in any form. It's an allegory of an aspect of what cinema is at its heart. It's this dangerous, mad kind of science."

More to the point, Shadow of the Vampire explores the act of filmmaking as a form of vampirism. "It was very important for me to imbue the project with these themes," continues Merhige. "First there is the idea of the cinema -- and the camera -- as vampire. The technology of the motion-picture camera is an invention which comes after the Industrial Revolution. This little black box is a form of sorcery that captures the shadows of the living into itself and then transfixes us for however long we are sitting there. Also, the idea of the director as vampire, and the Method Actor as vampire were things that I very much wanted to communicate within this film."

F.W. Murnau could not have a better interpreter than E. Elias Merhige. His black-and-white 1991 film Begotten shows a director devoted to the strange, horrific, and ineffable power of the image. It was on the basis of having seen a tape of Begotten that producer Nicolas Cage placed the Shadow of the Vampire script in Merhige's hands. Comments Merhige, "I knew after reading the script the first time that I could make it -- that I could really do something great with it. I saw the film completely, and I knew what needed to be done stylistically and aesthetically. It was one of those really beautiful experiences of just really seeing it in my mind's eye."

Apart from Nosferatu being one of Merhige's favorite films and Murnau one of his favorite directors, Merhige was attracted to the project because it was "one of these films where you have a world within a world within a world. You have the film that I'm creating of 1921 and the shooting of Nosferatu, and then you have Murnau's world of making Nosferatu inside of that. So you have these multiple worlds meeting at different, uncanny tangents within the context of the story and the film."

Shadow of the Vampire was filmed on location in Luxembourg, which also adds to the film's authenticity. Not only did government incentives help stretch the film's budget, but the paucity of films shot there allows its images to appear all the more striking and original. Furthermore, says Merhige, "I used these 10th- and 11th-century castles that have never been shot in before. The country is a crossroads between eastern and western Europe. You see profound influences of eastern and western Europe in the architecture, which makes it really work."

The casting of John Malkovich as Murnau and Willem Dafoe as Schreck could not have been more perfect. Apart from their strikingly apt physiological attributes, both actors are skilled at portraying obsessive characters. They embody what Merhige considers to be the purest form of filmmaker: "a seer, someone who is looking ahead, bringing the ineffable and the stuff we can't speak about and can't put into an image, and bringing it into the form of drama and images."

Shadow of the Vampire opens in Austin next Friday, January 26.