Roger Corman took a break from cheapo horror and sci-fi flicks to make this cheapo gangster work (starring the late Jason Robards as Al Capone), but it's still a Corman quickie from beginning to end. 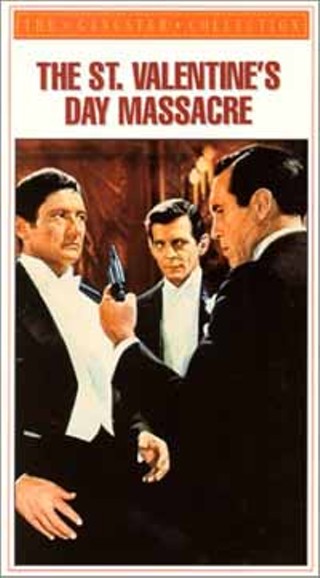 D: Roger Corman (1967); with Jason Robards, George Segal, Dick Bakalyan, Bruce Dern, Ralph Meeker, Jean Hale. Roger Corman took a break from cheapo horror and sci-fi flicks to make this cheapo gangster work in the mid-Sixties, but it's still a Corman quickie from beginning to end. Complete with an authoritative-sounding narrator (the familiar tones of Paul Frees) for a sort of Saran Wrap of authenticity, Corman's movie follows the gang wars of 1920s Chicago that led up to the infamous garage massacre. A puffy, dissipated-looking Meeker plays Bugs Moran, archenemy of the Capone gang, with a smart-ass Segal channeling Jimmy Cagney as one of Capone's main torpedoes. With the competition over bootlegging territory, the stage is set for a clash between the two rival gangs. The dialogue is punctuated by the rattle of Tommy guns about every 10 minutes or so, with sharp-dressed mobsters spurting red house paint when they're not mouthing off with Thirties-era Warner Bros.-style gangster-dialogue. Observant viewers will spot Corman regulars Dick Miller and Jack Nicholson in smallish roles, as well as familiar thug types like Dick Bakalyan, John Agar, and Leo Gordon, and even Green Acres' Mary Grace Canfield! The centerpiece of the movie, though, is the late Jason Robards as Capone. Sure, he didn't look a thing like the real mob boss, but Robards' bug-eyed acting is something to see. He leaves no piece of scenery unchewed in this gale-force torrent of hammery, bellowing nearly every line at full volume and obviously having a great time, with Corman telling him to pull out the stops and just let 'er rip. It's not high art, it's not historically accurate, it's more like a live-action cartoon, a B-movie dressed in A-movie clothes and not fooling anyone. Watch for Segal's ass-whupping at the hands of his girlfriend Myrtle (Hale); you'll be rooting for her to split his fool head open. It may be a B-movie, but there are plenty of first-run films that don't deliver nearly as much entertainment for one's dime.