A Man of Character 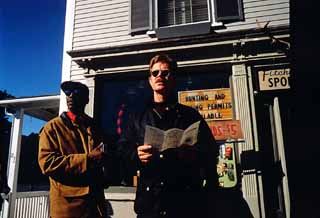 William H. Macy may not be a household name amongst mainstream filmgoers -- it's difficult to visualize a group of Scary Movie fans mulling over the nuances of his remarkable performance in Fargo -- but more and more his pinched, somehow schoolboyish face is becoming a pop-culture staple. His starring turn in State and Main, David Mamet's new acid-barbed take on Hollywood mores involving an infestation of backbiting H'wood weasels in a small Vermont town, will likely add another notch in his indie-cred belt, but it's his upcoming roles -- such as a lead in Steven Spielberg's dino-franchise Jurassic Park 3 -- that will, presumably, thrust him into the limelight.

His career to date has included a wealth of stage plays (many written by school chum Mamet) and, it goes without saying (but I'll say it anyway), a cluster of defining roles in the aforementioned Coen brothers film and a deuce of magically bracing character roles in P.T. Anderson's Boogie Nights and Magnolia. (Of Anderson, Macy says with a chuckle, "Oh, man. He's neat.")

And then there are the roles that simply couldn't have been played by anyone else: his note-perfect role of detective Arbogast in Gus Van Sant's bizarrely unfulfilling remake of Hitchcock's Psycho; family-man-cum-superhero the Shoveler in Mystery Men (in which he stole the show from lead Ben Stiller); and Sheriff Chappy Dent in Happy, Texas.

That one actor could essay as broad a range of characters as this (an admittedly partial list -- his bio includes more than 60 films total) is striking, and only reinforces the dismal millennial fare that glutted the cineplexes like so much stale popcorn this past year.

I spoke with Macy on the phone from Los Angeles about his iconic position as America's indie darling, the state of indie filmmaking today, and what on earth Gus Van Sant was thinking.

William H. Macy: Oh, yeah. We've started two theatre companies together. We both went to Goddard College. And then he came back as a teaching fellow, and he was my teacher. And I credit him with teaching me everything I know. After a period of time we moved to Chicago and started the Old St. Nicholas Theater, which was kind of the genesis for that off-loop Chicago renaissance that resulted in Steppenwolf. And then we started another theatre company in New York City called The Atlantic Theater Company, which is still in existence and I think is the premier off-Broadway company. And then, of course, when David started making movies, I began doing those as well. We did the original production of American Buffalo back in Chicago, The Water Engine, you name it.

AC: Was the part of Walter Price in State and Main written with you in mind?

WM: I think so. It's hard to tell sometimes. He calls you up and you read the script. But, I mean, I'm all over it.

AC: The whole tone of the film, your part included, is rather nihilistic, very dark, albeit a comic darkness ...

WM: I don't really agree with that, actually. I found it was a feel-good movie, and I think the reason is that, although everyone in the film is on such bad behavior, is because David has such affection for all the characters, no matter how vicious they may appear to be. He and I both have little places up in Vermont. We love Vermont, and we love Vermonters. He loves the film business, he grew up with the film business. My character, Walt Price, you know, on one hand he's driven and on the other hand he's, "Yeah! Yeah!" They're spending a hundred million dollars to make a movie -- of course he's driven. They don't pay the directors to be "nice guys." It's not a popularity contest. They pay the directors to get the film shot, you know what I mean? AC: I get the feeling that a Mamet set is somewhat different than those of other directors. Is it?

WM: David is a jokester. He's great fun. He learns everybody's name. He loves to play practical jokes. Some of them are vicious. He once put one of the drivers in costume and put him in the movie Things Change. He rehearsed this guy -- he was playing a hotel desk clerk -- and he rehearsed this guy all the way: The ledger had to go here, put the pen exactly on this spot, telling the guy that this was important because these were all extreme close-ups. So they send this guy off to make-up, and then David comes over and hot-glues the entire top of the desk. That's the kind of atmosphere you get on a David Mamet set. He writes vicious little notes that you discover when you're acting on the set. I was doing Oleanna, and I walked by this ladder and there, in his handwriting, in the middle of a take, was this note that said "Learn to act, fuckhead."

AC: One of the more interesting cinematic exercises you've been involved in was Gus Van Sant's remake of Psycho, which no one seemed to get. What was your take on that experience?

WM: That was just an ill-begotten picture. I remember everybody was thinking Gus was going to come up with the rabbit out of the hat and there was no rabbit in the hat, apparently. You know, I'm not that much of a fan of Hitchcock, actually. I'm not crazy about him like some people. I think some of his films are stultifyingly boring. And so many of the performances in his films are just dreadful. His headliners are always good, but some of the minor roles ... God, there's some dreadful acting in his films.

I was really pleased with the way I played Arbogast. I thought I came out smelling like a rose. You know, he should've fixed the parts that weren't good, but he was making a completely faithful copy, and I don't know if that was a good thing.

AC: Did Van Sant explain that to you going into production?

WM: Yes, he did, and we all thought that, hey, it's Gus Van Sant and he's a genius. I think To Die For is one of the best films I've ever seen. And I love Gus. When he calls, you say yes. And then later on you figure out what he's talking about. I would do the phone book if Paul Thomas Anderson were directing.

AC: In many critics and filmgoers' eyes you're the quintessential "indie" star. I'm wondering if you feel the term has all that much meaning these days when it seems as though every new Hollywood Reporter features a story on the merging of so-called "indie studios" with the more established mainstream filmmaking outlets?

WM: I don't know if it's been co-opted, you know? With the new technology, a lot of kids are out there making movies with their video cameras and then transferring it to 35mm later. And every once in a while one of them scores. So the independent scene seems to me to be alive and well. The economy's good, and people are willing to lose all their money. As to the differences between indie and mainstream films, it's really good and bad. I'm not specifically or exclusively enamored of either. I'm at Universal right now doing Jurassic Park 3, and I'm sitting around in a huge trailer -- it's one of those things where I've got a kitchen with two refrigerators. And that's just made all the difference in the world, because I've been doing this film since September 2000. On a huge feature -- especially one that's as special effects-laden as this one is -- I act for an hour a day. And the days are 13 hours. So the other 12 hours I have a lovely place to go to. I get paid more money, the crafts services is great, the creature comforts are fine, and if something screws up, no problem, we'll come back and do it again tomorrow.

AC: And the downside?

WM: The downside is that every decision is made, remade, and rechecked, and quadruple-checked 17 times. And that's not good for art. Generally speaking. A lot of the spontaneity goes out of a picture. The very acting, too, because it's so studied, and the shots are so set up and so designed.

The little indies, on the other hand, man, it's like ... it's rough. Especially if you've got the leading role, because, man, you're acting your pants off all day. And the days are long. You don't have those amenities, and if something screws up it's a disaster. And sometimes you have to move on before you're satisfied. The good side is that it kind of slips in under the radar. The director -- pretty much -- is allowed to have his head, and can do what he deems best for the picture.

AC: Are you looking forward to this sort of guerilla, digital video filmmaking revolution?

WM: You know, all I can do is speak for myself, and I love going to a big cinema with an advanced sound system and just getting my hair curled by these fantastic movies. There's room for everybody. I've seen a bunch of those little guerilla films that come out and the vast majority of them are unwatchable. They're just trite.