Although it was described as "pure fantasy" by the Sex Pistols' Johnny Rotten, Sid and Nancy gives the impression that it's not that far off the mark. 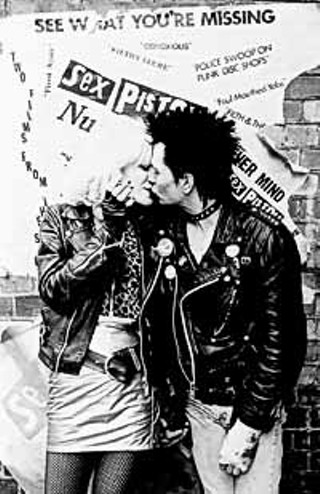 D: Alex Cox (1986), with Gary Oldman, Chloe Webb, David Hayman, Andrew Schofield, Courtney Love. "Kill me, Sid, just kill me!" Nancy Spungen (Webb) shrieks, and at that point, the entire viewing audience is probably ready to oblige. The shrewish, whiny, manipulative, and very tragic Miss Spungen has found a soulmate in Sid Vicious (Oldman), the ultimate punk rocker from the Sex Pistols. With their disdain for all things conventional, including life itself, Vicious and Spungen are a pathetic pair and one very potent reminder of a turbulent era that neither of them survived. The truly gifted and underrated Webb, as Spungen, sports the uniform of the period (motorcycle jacket, shredded fishnet hose, and skyscraper shoes) and proves she's not just another pretty face. In fact she's pretty scary with her ratty bleached hair and apocalyptic make-up, but it's the depth of Spungen's debilitating misery that Webb captures in an ugliness bordering on bravery. It's a pathetic portrait, rather than a sympathetic one, with Webb's portrayal offering zero opportunities to care about this character -- except that Nancy Spungen was more than just a character in a movie. Her tragedy of self-destruction is one that has been played many times both on- and off-screen but seldom in such a harrowing and searing composition of addiction, despair, and emptiness. As Vicious, Oldman (the second choice for the role was Daniel Day-Lewis!) also gives a harrowing, repellent performance -- underscoring the fact that the same arrogance and apathy that made him a star also did him in eventually. Schofield, as Johnny Rotten, gains the only sympathy in the entire film as he helplessly watches his friend and partner slide into the hellish grip of drugs and Spungen. Hayman, as Malcolm McLaren, is passive wickedness itself as the instigator who then sits back and watches the drama unfold. Then there's Courtney Love, sporting the same frowzy harridan look that she wore throughout most of the Nineties. Director Cox (Repo Man) ably manages the story and cast, giving it all there is to give. But there's simply so little to care about, and the afflictions that befall the main characters are completely of their own devising. Despite a fairly lengthy list of factual errors, the movie (described as "pure fantasy" by the real Johnny Rotten) is effective and disturbing nonetheless, giving the impression that it's not that far off the mark.