Night of the Living Dead, The Texas Chainsaw Massacre, Halloween, Last House on the Left 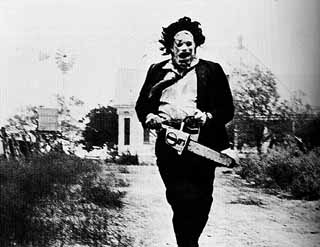 It used to be monsters and now it's maniacs. Great American horror films were driven by monsters, nightmare creatures created out of deep-running mother lodes of pure human fear. They were distorted, inhuman, and dangerous -- in the Silent Era, think The Golem (1920), The Phantom of the Opera (1925), and The Hunchback of Notre Dame (1923); with the coming of sound, think Frankenstein (1931), Dracula (1931), The Mummy (1932), and The Wolf Man (1941). Val Lewton helped the genre evolve in the Forties with a series of stunning low-budget horror films including Cat People (1942), The Leopard Man (1943), I Walked With a Zombie (1943), and The Curse of the Cat People (1944). Lewton managed to overcome cost restrictions through cinematic imagination. Instead of elaborate sets and horrific make-up, he used lighting and story. The unknown was the monster -- the terror was out there but very close to us.

In the late Sixties and early Seventies, the monster became us. Sometimes he might wear a mask -- like Jason, Leatherface, and Michael Myers -- but more often than not, he looked like a neighbor, if, perhaps, one who was a bit deranged. This was an American innovation. The classic Thirties' horror films mostly had their roots in Europe. The Fifties' films featured psychos and crazies. But the Sixties gave us real monsters with awesome powers who looked just like us. They were us -- Alfred Hitchcock's Psycho (1960) and Michael Powell's Peeping Tom (1960) carried to their logical extreme. If, as viewers, we participated in the horror, what happened when we were the horror?

The filmmakers profiled in the Independent Film Channel documentary American Nightmare (see Marjorie Baumgarten's "American Nightmare" on p. 84) literally changed the genre. Most evolution is gradual; many of the cinematic and narrative ideas of these filmmakers have many sources. Still, the work of George Romero, Tobe Hooper, John Carpenter, and Wes Craven can't be overestimated. These aren't just scary, intense horror films -- they are works that changed everything that came after them, their influence bleeding over into mainstream films and television. This Halloween might be time to revisit a few of the classics.

D: George Romero (1968); with Duane Jones, Judith O'Dea, Russell Streiner, Karl Hardman, Keith Wayne. George Romero's masterpiece not only helped launch a generation of horror films but also helped establish the midnight movie as well. I first saw it at the Orson Welles Cinema in Cambridge, Mass., in 1969 or '70. We had watched a double bill of W.C. Fields comedies, and Night was showing at midnight. Being the film know-it-all, I bet that it was some William Castle-like effort from the Fifties. Later, when I tried to get out of my seat to leave the theatre, my friends pushed me back down. We had never seen anything like this before. Neither had most other people. Sure there were some Italian horror films, but even Herschell Gordon Lewis was neither as hard-core nor had the impact of Night. After two generations of ever more graphic and detailed cinematic grossness, Romero's visuals have probably lost much of their power. But even for first-time viewers I can't imagine that the exquisite paranoia of the movie wouldn't have strong effects. The film, like the best horror films, is unrelenting, the black-and-white cinematography keeps the film in an ever-tighter grip. An abortive rocket launch spreads radioactive fallout across the land causing the dead to rise. They eat the flesh of the living. A small, incompatible group end up in a house surrounded by the Dead. What if we were the monsters, and the monsters were us?

D: Tobe Hooper (1974); with Marilyn Burns, Gunnar Hansen, Ed Neal, Allen Danzinger, Paul A. Partain, William Vail. Initially as famous for its title (contributed by Warren Skaaren) as anything, the film delivered the goods and became an unexpected monster hit generating tens of millions and dozens of lawsuits. The film is on-target from its annoying opening to its intensely drawn-out end. A group traveling in a van encounter a family that uses chainsaws to good effect. The nightmare is no longer the big, spooky haunted house beset by ghosts and monsters but the small town where the ghosts/monsters are just the neighbors. The film doesn't let go. The power is in the characters -- the Chainsaw family is more fascinating than their victims, and their perversity drives the film. The pacing and camerawork just accentuate this meta-dysfunctional family. The film had a cinematic influence on other filmmakers, and its success inspired a generation of independent filmmakers of all stripes.

D: John Carpenter (1978); with Donald Pleasence, Jamie Lee Curtis, Nancy Loomis, P.J. Soles, Charles Cyphers, Kyle Richards. Certainly it had been suggested before that the camera was the monster -- but never so exhaustively as in this innovative masterpiece. Utilizing the recently developed Steadicam as the most expressive instrument in the orchestra, Carpenter offers a cinematic tone poem -- a horror film set in the most suburban neighborhood. Reinventing the geography of the horror film, Halloween sends the camera gliding everywhere all the time and the rhythm of film has been changed forever. A killer is about in this suburban neighborhood far from the city's killing streets. Why and, more importantly, where? No wonder the body count kept getting upped in later gore movies -- if you can't do it better, why not do more? A terrific cast, great direction, and the barest plot -- simply an excuse for the camerawork -- combine to make a film far greater than the sum of its parts.

Last House on the Left

D: Wes Craven (1972); with David Hess, Lucy Grantham, Sandra Cassel, Marc Sheffler, Fred Lincoln. I've never seen this movie, though I'm well aware of its impact. Truthfully, even when I was a glutton for this kind of movie, Ed Lowry made this one sound too unendingly grim and depressing. When I would have seen it, I couldn't. By the time it had become more readily available, I'd lost my taste for horror films. (Having a family does that. After all, the real horror in so many of these films is family.) Lapsed academic Wes Craven adapts Ingmar Bergman's The Virgin Spring in a vicious, ugly film. Which isn't to say I don't love Craven; The Hills Have Eyes (1977) and A Nightmare on Elm Street (1984) are among my favorite films. But I've just never worked up the stomach for sitting through this one.