Does it seem like this new crop of series, including Ed and Gideon's Crossing, mask their chauvinism under fresh-faced idealism and earnestness -- or is it just us? 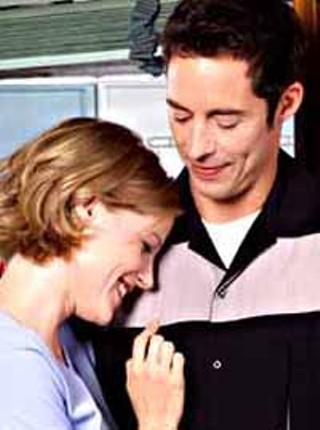 Something strange happened to me the other evening when I was watching Ed, the new NBC dramedy which airs on Sunday nights. It's still quirky, heartfelt, and warm, as I believe I described it in an earlier column. And Thomas Cavanagh as the title character is perfectly charming. But then, as if Bizarro World finally came into focus, I found myself frowning and asking myself: In the real world, wouldn't Cavanagh's Ed Stevens be a stalker?

I know it's difficult to think of the rubbery-faced Cavanagh as that jerk who calls you in the middle of the night or lurks outside your house or workplace, but once I started to really process all that Ed was doing, it left me with this creepy-crawly feeling that not all is right in Stuckeyville. Start with the show's premise: Small-town boy makes good in the big city, but in one very bad day, he's taken to the mat at work and at home. In the former scenario, he's fired over a misplaced comma (in stalker world, isn't it always that one harsh injustice that sends them reeling?). In the second, he comes home to find his wife in bed with the mailman (a man beneath him, in stalker terms). What does he do? He sulks over his yearbook, sees the face of his first, true love, and leaves the big city for his hometown (Stuckeyville). By chance, he shares a stolen kiss with his high school sweetheart (Julie Bowen), and that inspires him to buy a bowling alley and pursue the lass full time.

She, of course, has issues. She's involved with a man (Gregory Harrison) who's not good enough for her and can't even see when Ed is trying to woo her right in front of his eyes. Since she was an active participant in the stolen kiss, she's set up as confused and not really capable of making her own decisions. But Ed knows best. He knows they're meant for each other. Why? Because he knows it in his heart, and the heart always knows.

At this point, I'm sure there are many readers rolling their eyes, thinking, "Geez, lighten up." I would, were it not for the already off-center reality of this otherwise amiable series, which leaves it open for counter-interpretations to the sticky-sweet ones so far. Maybe I've watched too many episodes of Buffy the Vampire Slayer or Angel, which knead a metaphor with sometimes astounding results. But wouldn't you know -- Ed's Stuckeyville, Buffy's Sunnydale, and Angel's Los Angeles bear a striking similarity. Each are places that appear normal but hide their real complexion under rolling hills or sunny skies (L.A. has big city glam, glitter, and grit). Ed's Stuckeyville is the hero's kingdom where, if he can slay a dragon (Harrison), he'll earn the hand of the fair maiden (Bowen). This is also a feature of the stalker psyche -- the need to cast the situation between the stalker and his intended in an impossibly romantic milieu that is inviting at the same time it's twisted, particularly in his interpretation of the maiden's "no," which, in Stuckeyville, really means "yes."

Take this exchange in last week's Ed. Somehow, Ed finagles getting a homemade music video of himself onto Carol's home VCR. She watches it, mouth agape. The next day, he happens upon her as she treks across campus (another stalker trick ... sneak up on your prey). He asks her opinion of the video. She says the first time she watched it she was shocked. The second time, amused. The third time, frightened. His reaction, with a salacious curl on his lips, "So you watched it three times."

I can't be the only one who found the exchange unsettling.

I had the same reaction with last week's episode of Gideon's Crossing. A former cancer patient of Dr. Gideon's, apparently suffering a relapse, comes to the hospital only to tell him she's going to use alternative therapies to control her cancer. This, of course, starts a meditation on the rights of patients to manage their own care and the role of the physician in this process. Dr. Gideon has a great deal of trouble accepting his patient's decision and tells her as much, which is fine. But then the good doctor not only confronts his patient's alternative caretaker, but he also shows up at his patient's yoga class, all to prove that he has an open mind about all things alternative. See? He played nice, so now it's time for her to come to her senses and check in to the hospital for the real therapy -- his. (Actually she does check in, but only for pain management). For extra good measure, he tells his patient that he feels fatherly toward her. The unspoken message being that all his aggressive concern is for her own good, whether she knows it or not.

Maybe by next week, my Bizarro-World glasses will be fogged over, the world will appear rosy, and I'll wonder what got into me. But I don't think so. It's troubling, this new crop of series, like Ed and Gideon's Crossing, which mask their chauvinism under fresh-faced idealism and earnestness. These two shows in particular set up a world in which men know best and women can't even look in the direction of self-doubt without the man swooping in to make it all better -- if only she'd come to her senses and let him.

I'm still a big fan of Andre Braugher as Dr. Gideon and really do want to enjoy Tom Cavanagh's Ed. But if this kind of character development keeps up, I may be seeking out other "fantasy" dramas, like Buffy and Angel, which, ironically, approach reality in a more evenhanded way.

In Austin's Own Back Yard

Four Austin gardens are the subject of an upcoming episode of the HGTV series, The Secret Gardens of ... . Profiled gardens include The Lady Bird Johnson Wildflower Center, the Umlauf Sculpture Garden, and the private garden of artist Jennifer Myers, who takes a painterly approach to the design of her garden. The last segment of the episode features a three-terrace garden in an unidentified private home in the heart of the city.