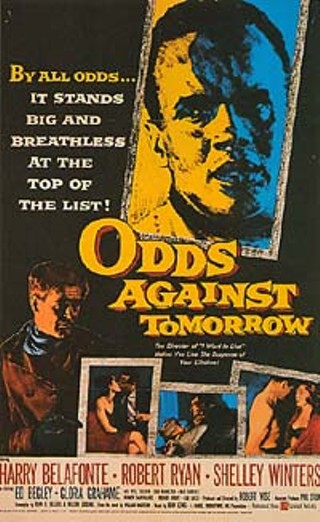 Disgraced ex-cop Dave Burke (Begley) has his eye on a bank job and needs to recruit some help to pull it off. He winds up with sometime jazz singer and vibes player Johnny Ingram (Belafonte) and aging career criminal Earl Slater (Ryan) under his wing. The three lay out a plan to knock over a small-town bank a hundred or so miles up the Hudson from New York City on a day before factory payrolls come out. What Burke hadn't counted on, though, is Slater's bitter racism; Slater and Ingram take an instant dislike to each other. Slater baits the black partner, while Ingram stands up for himself and refuses to put up with it. The three get a nondescript Chevrolet wagon with a hot-rodded V8 for a getaway car, then head up the Hudson to do the job. Unfortunately, nothing goes right for the threesome. Odds Against Tomorrow came along at a transition period in the history of the crime film. The plot is certainly familiar enough -- a trio of losers coming together to play out an endgame and keep a preordained date with catastrophe. Co-written by then-blacklisted writer/director Abraham Polonsky (Force of Evil, Tell Them Willie Boy Is Here), who used John O. Killens as a front, the dialogue crackles in the style of Forties film noir. Ingram's smoky lounge is a noir staple, and the movie's finale is even shamelessly cribbed from Raoul Walsh's White Heat. However, the story breaks with tradition in its element of racial tension between Slater and Ingram, a socially conscious nod to the changing times in American society. As a dramatic device, it works much better than simply having two characters who distrust each other or rub each other the wrong way. Unrepentant socialist Polonsky worked the issue into the film's narrative nicely, forcing the audience to confront the issue of racism. Visually, the film also points more to Sixties crime films like In Cold Blood, leaning more toward overexposed exterior shots and location shooting for a bleak realism that moves away from noir's expressionist world. As the Sixties wore on, that cool, newsreel authenticity was taken to the point of becoming stylized in its own way. It's only when things start to go sour that Odds Against Tomorrow adopts the night-for-night shooting and slanting shadows of film noir (the film was edited by the legendary Dede Allen). Wise used his locations well, with the dingy factories and small-town locales of upstate New York as the perfect backdrop for a doomed caper. Polonsky and Wise put a lot of depth into their characters and got great performances out of the three principals. Burke lives in a New York efficiency, walls lined with photos from his police career, with only a German shepherd to keep him company. Ingram has what would seem like a fairly normal life on the outside, with an ex-wife and six-year-old daughter. His gig as a lounge singer doesn't make ends meet, however, and he's several thousand dollars in debt to a local hood who's quickly running out of patience. Slater may be the most interesting character of the trio. Living with his girlfriend Lorry (Winters), he's getting older and needs the one big break that will bring a comfortable life for the two of them. There's an odd dichotomy of brutality and decency within Slater. After Lorry leaves in a snit one night, Slater simply goes to their lonely neighbor Hel (Grahame, in a great combination of sexy and pathetic) for a fling. Perversely, she asks him before they make love what it was like to kill a man. On the other hand, a GI showing off judo moves in a bar (a very young Wayne Rogers) picks a fight with Slater. Slater tries to back out gracefully, but the soldier won't take no for an answer; the older man feints with his left and delivers a punch to the stomach with his right that leaves the GI gasping for breath on the floor. Shamefaced, Slater says, "I didn't mean to hurt him!" before turning around and walking out. Slater's racism is treated as a nasty byproduct of his Oklahoma upbringing, but he still embraces a tiny black girl in one of the movie's opening scenes -- although he then calls her "little pickaninny." Ryan's imposing size and cold, beady-eyed glare made him a perfect screen heavy, and he was cast as a racist more than once (Crossfire, Bad Day at Black Rock). The irony is that Ryan was known as one of Hollywood's more progressive actors throughout his life. Odds Against Tomorrow's beauty, though, lies in its perfectly realized details and set-pieces, the ones that stay with the viewer by way of their nuance and subtlety. There's the aging Slater's grin of exhilaration when he pushes the Chevrolet wagon up past 110, a desperate, worried man finding release by the thrill of a fast car and an open road. You can see 20 years drop off Slater's face as the speedometer climbs upward. There's Begley's entirely different grin when he's challenged by a small-town cop as he leaves the bank with a sackful of cash. He walks toward the cop with teeth bared in a rictus that tells the audience that things are only going to get worse from there. There's the sleazy sexual tension of the scene in which Slater seduces black widow Helen (not a difficult task), climaxing with Slater pulling her robe off and revealing a leopard-skin bra underneath. There's the long shot of Ingram sitting on the banks of the Hudson by himself, visual poetry that, without a word of dialogue, conveys his misgivings about the entire scheme. What it all adds up to is a brutal and tense crime film that combines the fatalism and alienation of Fifties noir with a jazz score, a taboo subject (racism), and a cold, contrasty look that has little to do with earlier noir caper films like The Killing or Asphalt Jungle.