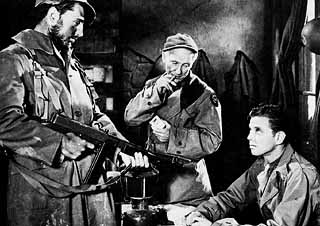 THE STORY OF G.I. JOE

War correspondent Ernie Pyle attached himself to a U.S. Infantry company in North Africa, later catching up with them during the Italian campaign. His story is dramatized in Wellman's The Story of G.I. Joe, with Meredith playing Pyle and Mitchum playing the weary Capt. Walker (having received a battlefield promotion from lieutenant). The result is undoubtedly one of the best war movies ever produced. Walker's men, accompanied by a scruffy terrier named Ay-rab, slogged through the mud of southern Italy only to be pinned down at Monte Cassino, where they burrowed into a hillside to live like Neanderthals in their dugouts. The U.S. command refused to bomb the monastery at Cassino for weeks, citing its religious importance, until the loss of American soldiers prompted them to go ahead and destroy it. In one of war's great ironies, the Germans continued to use the rubble to direct artillery fire. Pyle documented the day-to-day struggles of the company in his dispatches, personalizing the war by submitting human interest stories for the home front. With the exception of Samuel Fuller, few directors had more authority to direct a war picture than William Wellman. Wellman was a larger-than-life figure, having seen combat with the legendary Lafayette Escadrille in WWI. To bring home the picture with verisimilitude, Wellman shot much of it in Italian villages that had been ruined months before and used U.S. combat soldiers to play themselves. It was a successful strategy; the firefights in the villages and the scene in which the soldiers maneuver a howitzer into position and begin firing couldn't possibly have been played as well by actors. By the time the film was released, Pyle himself and several of the movie's GIs had been killed in battle. Mitchum was hardly ever better than in G.I. Joe. The weight of the responsibility for his men shows on Mitchum's face in every shot. He confesses to Pyle that after losing so many men under his command, "You can't help but feel like a murderer eventually." Walker knew when to give a little as well; in the film's opening moments, he orders his men to leave the mascot Ay-rab behind, a decision that the men hate. They pass the little dog along and say their goodbyes to him; however, when Pyle shows up, Walker lets the correspondent take the dog along after all. Meredith was equally good at capturing Pyle's character, and the interplay between the two men is compelling and natural. Though he carried a typewriter rather than a rifle, Pyle earned the respect of the soldiers he lived alongside, and Meredith captured the essence of the 43-year-old journalist. G.I. Joe is most memorable, though, in the unflinching way that it captures the miseries and indignities of the WWII footsoldier. Filthy, mud-caked, and bone-weary, Wellman's infantrymen live on K rations and exist for one reason: to kill Germans. Steele, as Sergeant Warnicki, carries a carefully wrapped phonograph record of his son's voice and searches for a record player so he can hear it. He finds one in an Italian village and struggles with it for days. After a particularly brutal day, he finally gets it to work; overcome with emotion, Warnicki goes berserk and runs out of the dugout to kill every German who has kept him from being with his son. It's one of the many vignettes from the film that brings WWII home for the audience. Spielberg cited The Story of G.I. Joe as a great influence on Saving Private Ryan, and it's obvious. However, Wellman's film is the better of the two in many respects. For all of its merits, Ryan still carries much of Spielberg's tendency toward manipulation and emotional button-pushing. Both recount the war in Europe in a graphic, unsparing way, but at many points, G.I. Joe rings more true than Ryan in its unsentimental approach. The one big difference is in Ryan's depiction of the horrors of seeing men shot to pieces. Sam Fuller once said (in reference to his war pictures), "I lie with the camera all the time," meaning that, for the Hollywood war picture, men would simply scream and fall over when killed. In 1945, audiences were nowhere near ready to see the truth about modern warfare and what shrapnel, bullets, and grenades did to the human body. Aside from that, the film pulls few punches in depicting the miseries of war and what it does to the footsoldier. G.I. Joe still has an emotionally devastating impact and stands well today in every respect. The Story of G.I. Joe and Saving Private Ryan should both be required viewing in high school history classes to point up what war is really about and the sacrifices that a previous generation made in WWII.