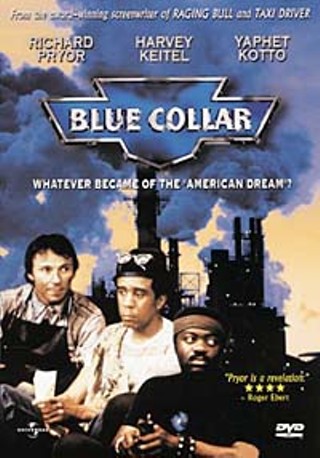 D: Paul Schrader (1978); with Richard Pryor, Yaphet Kotto, Harvey Keitel, Ed Begley Jr., Borah Silver. Paul Schrader's directorial debut is an unexpectedly gritty working-class melodrama set in Detroit. Zeke (Pryor), Smokey (Kotto), and Jerry (Keitel) are three best buddies who toil away on the Checker Cab production line in the Motor City. By day they put up with harangues from a sadistic supervisor, Dogshit Miller (Silver), and sweat over the boxy autos as they roll down the production line. By night, the threesome makes tracks to a nearby bar where they toss down a few cold ones before traipsing home. Zeke and Jerry are both family men, while Smokey is a fast-and-loose bachelor; all three wonder why their lives seem to continually be a matter of one step forward and two steps back. An FBI agent infiltrates the ranks at the bar, posing as a grad student and asking questions about shop management and the union. They stiff-arm the agent, but not before he's planted the seed of doubt in their minds. It eventually becomes apparent that the union is taking advantage of its constituents every bit as much as the factory is, and the threesome begins to hatch a scheme. The union has a large quantity of cash locked up in a vault at its headquarters, or so they think, and a heist looks like it might be feasible. The execution of the robbery is strictly amateur-night stuff, though, and rather than netting a huge sum of money to split between them, they come away with a few hundred dollars -- and a ledger documenting illegal loans made by the union. The ledger's value isn't lost on them, and they plan on using it as leverage against the union. As soon as the ledger is in their hands, though, it begins to take its toll on their friendships. It might seem unlikely, given Paul Schrader's Calvinist upbringing and academic background, that he'd have such a feel for the cadences and rhythms of blue-collar dialogue and the situations of ordinary working Americans, but his script is absolutely dead-on throughout, and a fairly radical departure from Taxi Driver or Rolling Thunder (released the two previous years). Rather than burdening the characters with politically oriented diatribes about labor and management, Schrader has them speaking in short, expletive-laced sentences that capture the frustration and anger of being on a treadmill of monotonous work at the factory and perpetual indebtedness at home. Certain scenes are unforgettable, such as the cocaine-weed-whiskey-and-sex party at Smokey's pimped-out bachelor pad. By daybreak, the three are still awake and sitting on the couch with a bottle in front of them. Rather than being relaxed and happy from the night's partying, though, they're spent, empty, and a little guilty; it's an emotionally desolate segment (and also where the germ of the idea for the robbery comes about). Pryor has probably never turned in a more fierce and intense dramatic performance than in Blue Collar (his non-comedy debut). An IRS agent turns up at his apartment one night, tightening the screws on Zeke until the visit quickly turns ugly. Eventually Zeke sells out to the union and becomes a shop steward, a coveted position in the organization; it's easy to see him weighing his options in a beady-eyed, calculating manner at every turn. The union turns up the pressure on the three men. Past the halfway point of the film, events begin to take on a momentum that lead up to its inevitable gut-punch conclusion. All three leads are excellent throughout; Schrader has recalled that the movie was an extraordinarily difficult one to make, as the three actors continually tried to go over the top of each other, as well as the technical problems of shooting inside a working factory. Trying to cope with the three egos and the myriad trials of the film drove the director to tears more than once. Blue Collar is not without its problems; at times the story seems to fetishize factory life to the point of seeming like a Soviet-era motivational film. The movie's editing and visual elements are a little flat, and the film has a "soft" sort of look that doesn't complement the story very well. The touches of goofy humor (such as the disguises that Smokey, Zeke, and Jerry pick for the heist) come so far out of left field as to seem like non sequiturs, though they usually work nonetheless. It's all secondary to the terrific performances, though, and the emotional depth of the story. This is a criminally overlooked and underrated film (it was also a financial flop at the time of its release). From the great opening sequence (set to a gravelly blues song) to the freeze-frame final shot, Blue Collar has aged little since its release and still stands as a great lower-middle-class document.