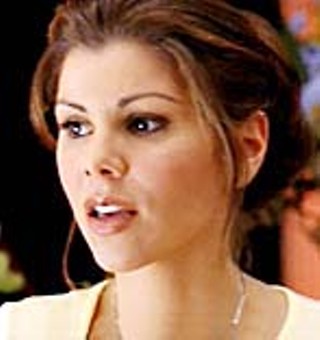 Now that the fall TV season is starting to peek out from behind the Olympics hoopla, I'm trying a new approach to TV watching. I will still tune in to my old favorites, but as new series premiere, I will select one premiere of the week to tout, praise, root for, and gush over -- or the opposite, if I really felt like my time was wasted.

This week, my favorite new show is CBS's That's Life. Don't let the fact that it appears on CBS throw you. Home to die-cast dramas like Touched by an Angel, JAG, Walker, Texas Ranger (which That's Life leads in to), Diagnosis: Murder, and Nash Bridges, CBS is not exactly the vanguard in delivering prime-time dramas. Judging Amy and, to a lesser degree Family Law, have brought some much-needed new life to the network's drama lineup, and I anticipate that the new series CSI and perhaps even the reincarnation of The Fugitive (both on Friday) will help nudge the network from its stodgy leanings. But right now, it's the new Heather Paige Kent vehicle that's turned my head.

Kent stars as Lydia DeLucca, a New Jersey woman who, on the brink of her marriage, dumps her fiancé of eight years and decides to go to college. It sounds straightforward, but her choice is complicated by the fact that her family is less than supportive. Not that her family doesn't want her to be happy -- in fact, that's the only thing they want for her. But with their working-class background, they do not understand going to school for the sheer joy of learning. And this is what the hour-long drama captures well: the strain of a woman exploring her intellectual capacity in spite of her well-meaning loved ones who believe the tangible aspects of hard work are the only way to happiness and stability. Add to this her age (at 32, she's considered over-the-hill), and her own moments of self-doubt, and That's Life offers a lovely portrait of a woman daring to take charge of her life.

I'm sure the premise sounds corn-doggy to those whose pursuit of higher education was a given and to whom all means of emotional and financial support were never in short supply. But for people from working-class backgrounds, particularly those who were the first in families to enter college, That's Life rings indelibly true.

The only clunky spot in the series opener was the contrived introduction of one of Lydia's professors. He turns out to be a drunk at the neighborhood bar where she works at night, while intimidating students by day. Yeah, okay. I'll swallow that, as long as those kind of contrivances are avoided in the future. But with its delayed Sunday premiere last week, and a regular Saturday night time slot, I fear That's Life will not gain the audience it deserves. That's Life airs on Saturday nights, 7pm, on CBS.

Did I Miss That Memo?

The notice in last Sunday's Austin American-Statesman "Show World" supplement was short, sweet, and without fanfare: "Austin will be without a UPN affiliate starting Monday." That means that fans of Moesha, The Parkers, The Hughleys, the new sitcom Girlfriends, not to mention WWF Smackdown will have to go without. On the surface, this sounds like a small loss. A netlet loses a market. But for those who appreciated "black night" on UPN (you can read that as derisive or a statement of reality), it seems to me that a portion of the television viewing audience has been summarily dissed without so much as a "Sorry, folks." In fact, the notice went on to state, fairly smugly in my reading, that "those desperate to see UPN do have another option" -- namely, move to Fredericksburg where KBEJ Channel 2 will continue to carry UPN. Some parts of Austin and surrounding communities can pick up the netlet, and a device called an A-B switch, available from electronics stores, was also suggested. Fans of syndicated shows Street Smarts, Change of Heart, Divorce Court, and Judge Hatchett can tune in to KVC weekdays from 7-9pm.

The first and only time I found myself with a group of people who didn't understand why This Is Spinal Tap or Waiting for Guffman were funny, I thought I had fallen in with a group of humorless mutants. Or perhaps it was the other way around. Maybe there's a mutant humor gene that makes the comedy of those films, and the humor of Larry David's upcoming series, Curb Your Enthusiasm, howlingly funny. I haven't seen a preview tape yet, but since it's patterned after his HBO comedy special (which aired about a year ago with the same title), I have high hopes.

The series stars David in a candid, unflinching portrait of himself as a stand-up comic, husband, and all-around regular guy making his way in show business. The series uses a quasi-nonfictional style, which relies on "script improvisation," according to one press report. I'm not sure what that means. From what I remember from Acting 101, improvisation isn't scripted. I think what the description is trying to convey is that, like in the comedy special, a certain set of circumstances are set up and the actors are let loose to improvise the scenes. Since David surrounds himself with highly capable actors, the result has little chance of falling flat. Cheryl Hines returns as David's wife, as does Jeff Garlin as his manager. Future guest stars include Julia Louis-Dreyfus, Ted Danson, and Mary Steenburgen. Curb Your Enthusiasm premieres Sunday, October 15, 8:30pm, on HBO. Additional playdates are October 17-19.

Critics said Joss Whedon was falling back on the tired device of bringing in a youngster (Michelle Trachtenberg) to freshen up the fifth season of Buffy the Vampire Slayer. Oh, bite me! I don't know what Whedon has up his clever sleeve, but bringing in Trachtenberg in the last moments of the season premiere was an intriguing move after watching Buffy confront the vamp of all vamps, Count Dracula himself. Bringing in the Count precipitated what looks to be an even deeper examination of who Buffy is and what she is to become. I have no idea what role Trachtenberg (as kid sister Dawn) plays in this new journey, but I'm along for the ride. Favorite moments in the season premiere: Xander taken under Drac's spell and exhibiting classic Renfield tendencies as the episode progressed. You remember Renfield, the bug-eating, maniacally giggling henchman who did Drac's bidding? Best moment in Angel: Angel singing in the demon karaoke bar was simply fabulous. His song of choice? Barry Manilow's "Mandy."