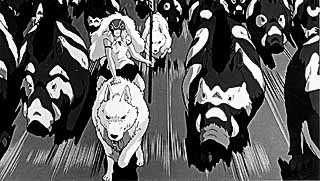 D: Hayao Miyazaki; with the voices of Billy Crudup, Claire Danes, Gillian Anderson, Minnie Driver, Billy Bob Thornton, Jada Pinkett-Smith. It took me a good, long while to finally watch Princess Mononoke, the English version of the 1997 anime Mononoke Hime by master of the form, Hayao Miyazaki. Something about a two-hour-plus Japanese movie about playing nice with nature just kept me away. Even when critical gush hit full tide ("One of the best movies of the year!" creams Roger Ebert; "Amazing to behold!" squeals Janet Maslin), I would set out for Princess Mononoke only to end up at American Beauty (again), like heading to the gym and winding up at the bar. Most of America kept their distance, too, either flummoxed by or downright indifferent to a nearly humorless animated movie about forest spirits and lacking even one hit song. Although reviews heralded the animation as nothing short of brilliant, they also hinted at gory scenes too graphic for the kiddies. Who was this movie for, anyway? Having finally seen it, I'm still not sure, but then I'm not sure what the target market for Star Wars was in 1977, either. That's the mythical adventure that kept coming to mind -- young warrior ventures into the mysterious beyond to triumph over evil, although evil is a slippery thing that's never so easy as black and white here. The warrior in question is Ashitaka, who kills a wild boar attacking his village and is cursed with a creeping, deadly infection that turns his skin into something like human camouflage. He leaves home to seek answers and salvation from the spirit of the forest, along the way becoming entrenched in a battle between the humans trying to raze the forest and the wild beasts determined to save it. He also meets Princess Mononoke, occasionally called "San" (much to my confusion), a somewhat petulant, fiesty little thing raised by wolves (Danes). With a script written by comic book creator Neil Gaiman, Princess Mononoke has its obvious moments -- "Why can't the humans and the forest live together?" cries Ashitaka -- but the lessons here are generally more profound than obvious. It should be noted, too, that the action sequences are thrilling, and the film's final 20 minutes are a mesmerizing spectacle unlike anything I've seen before. Billy Crudup plays Ashitaka, although since he was practically a nobody when the film was released, his name is rarely mentioned among the raft of celebrity voices, including Anderson, Driver, and Pinkett-Smith. But Crudup is quite the somebody these days, with a memorable turn in Cameron Crowe's Almost Famous (opening in Austin this week), and something tells me his name will become more closely associated with this film as both gain more, deserved recognition. The only thing out of joint here is Billy Bob Thornton as the scheming Jigo. If you'd think the good ol' boy accent might be jarring in the mouth of an old Asian character -- you'd be right. Still, the majority of viewer acclaim rightly focuses on Miyazaki's stunning animation. Miramax/Disney was contractually obligated not to alter one shot of the film -- and that seems just about right. (For a related story on AD Vision, the Austin studio which dubs anime, see "Animation Station")