Who Would Pay Money To See That? 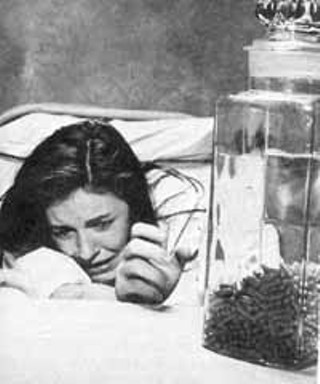 The Valley of the Dolls

Who Would Pay Money To See That?

Now, don't get us wrong -- we're not talking about the actual movies. This is about performances within performances -- when an actor or actress playing a performer gets to perform onstage. We're not talking about musicals, in which the songs move the story along, but staged performances like nightclub or theatre scenes, in which we get to see what's happening onstage. Let's take I'll Cry Tomorrow (1955), starring Susan Hayward, as an example. Susan plays Lillian Roth, a nightclub singer on the skids. Over the course of the movie, we see her perform onstage repeatedly, including Lillian's signature number, "When the Red, Red Robin Comes Bob, Bob, Bobbin' Along." Now, frankly, it's hard to imagine a time when a song like that could have been a major hit on the charts, but this is, indeed, what the movie would have us believe. We are subjected to Susan-as-Lillian whirling around in a big, fluffy skirt, singing her sincere little heart out with this stupid song and its ludicrous words, and yet, the audience is screaming for more, and the movie viewer is left slack-jawed, wondering what these people are screaming for. "Who Would Pay Money To See That?" (WWPMTST) is a question that my illustrious sister Margaret and I ask frequently while viewing many of our favorite movies. And they are our favorite movies, in spite of (or often because of) these hideous performances. Mildred Pierce (1945), an otherwise superior movie, contains a truly repellent performance from Ann Blyth, magnificent as the treacherous daughter, Veda. Veda gets thrown out of the house and becomes a singer in a waterfront dive. When her mother, played by Joan Crawford (of course), goes to find her, we enter the scene just as Veda is performing her big number -- some unnamed atrocity about a guy named Billy McCoy. As she hulas around the stage in some sort of South Seas (via Hollywood) sarong and lei, the effect is supposed to be tawdry. It's not. It's ridiculous, and it sorely tests the imagination to watch the nightclub patrons in the movie actually sit through the entire song. Thank God Joan shows up just in time and puts a stop to it. But Joan herself has turned in some pretty horrible performances-within-performances. Torch Song (1953) finds an aging Joan playing Jenny Stewart -- an entertainer of some sort. But the experience of watching Jenny entertain begs more questions than it answers -- we see her rehearse a lot and be mean to Michael Wilding, but when the big "Two-Faced Woman" number happens, watch out. Joan, as Jenny, is pure drag queen as she glares and flounces her way through the song, also with a big skirt. She and her sleazy backup dancers (sort of a Fifties version of the Solid Gold dancers) all appear to be wearing something that looks suspiciously like blackface as they try to drape themselves seductively on café tables. The performance defies even the possibility that the number might have been good when the movie first came out.

The big skirt is often an important aspect of "WWPMTST?" The Opposite Sex (1956) starring June Allyson requires several viewings to fully appreciate the sheer badness of the musical numbers. June, playing retired radio singer Kay Ashley, isn't responsible for all of them, but she has a real lulu, "Young Man With a Horn," performed with (and in homage to) trumpeter Harry James. She mugs her way through the song, wearing a demure little sweater and a great big chiffon skirt that she works mercilessly, spinning and flipping the skirt so much, like frothy waves on the beach, that it becomes the focus of the scene. This is known as "skirt-dancing" and, employed in many movies, is often a last resort to keep the viewer's mind from wandering and asking the obvious question,"WWPMTST?" The Opposite Sex provides several other numbers that beg that same question. Part of the plot (a musical remake of The Women) revolves around a Broadway show being produced called Yellow Gold about, naturally, the banana-growing industry. Sounds delightful already, right? We are treated to the splashy title tune from the show-within-a-show, in which some queen in tight toreador pants is singing, "There's yellow gold in the trees de bananaí" while Joan Collins and Joan Blondell, among others, conga around the stage in nightmarish neon outfits that make them look like jungle mermaids. Truly horrendous and almost unwatchable. Almost. But stick with it -- the very question of "WWPMTST?" occurs with such alarming regularity that you know you're witnessing greatness.

Often the most difficult-to-fathom aspects have to do with entertainment that modern audiences would be mystified by; the propensity toward finding singing hobos, newsboys, and clowns entertaining would escape today's sophisticated viewers over the age of six. A Star Is Born (1954) is loaded with opportunities that prompt the question, "WWPMTST?" Not that it's Judy Garland's fault -- she sings like an angel whether she's dressed as a hobo, newsboy, or clown, but perhaps, again, the problem dates back to what was considered entertaining at that particular time. The era of vaudeville is often conjured in movies such as this one and is sentimentally portrayed as a simpler era catering to simpler tastes. Simple-minded is more like it, if we are to believe that hats and canes and happy darkies are necessary accoutrements for entertainment. Of course, the "WWPMTST?" question does not apply to scenes that are awful by intention -- the "Iris, the Hand-Walking Queer" routine from Beaches (1988) is so repulsive that the director achieved exactly what he wanted. On the other hand, Dirty Dancing (1987) gives us Jane Brucker as Baby's sister Lisa, who performs her own rather South Seas' "Billy McCoy"-ish number in a talent show. A few bars of it would have sufficed, but the director makes us wince and squirm through the entire interminable song, and it seems particularly evil of him since, while the audience on the screen might have conceivably enjoyed the performance, the audience in the theatres paid dearly, and not just in dollars. The "WWPMTST?" Hall of Fame award goes to Valley of the Dolls (1967), in which every single staged performance in the film is abysmal. When Patty Duke, as Neely O'Hara, performs a song called "It's Impossible" on a telethon within the movie, it's not just impossible -- it's painful. The song is schlock, and Neely, in a silly sweater and skirt, is completely upstaged by the double strand of beads she is wearing. As she tosses herself side-to-side to convey emotion, her beads first loop themselves over one breast and then over the other, and finally, over both at the same time -- an unintentionally hypnotic moment that manages to take your mind off the ever-present question, "WWPMTST?" One of the most unbearable scenes is the torturous and treacly "Come Live With Me" nightclub number performed by the completely talent-free Tony Scotti as that hot new singing sensation Tony Polar. The sole redeeming factor is getting to see him reprise the song on drugs in a wheelchair. Then there's the girdled-to-the-gills Susan Hayward as the vicious stage star Helen Lawson, singing some dreadfulness called "I Plant My Own Tree" as an Alexander Calder mobile swirls around her. The Helen Lawson character was based upon Ethel Merman, who was responsible for many "WWPMTST?" performances herself. It's extremely difficult to imagine her becoming a star now and equally hard to watch her perform. As if the song itself weren't enough to make you wonder "WWPMTST?," the hair and dress that Susan (as Helen/Ethel) wears makes you wonder, "Did she pay someone money to make her look like this?" It is a low point in film history, as you watch a great actress playing a dreadful actress, singing an awful song from a bad show within a truly horrible movie. Truly horrible, and exquisite in its trashiness. "I'd pay money for that."