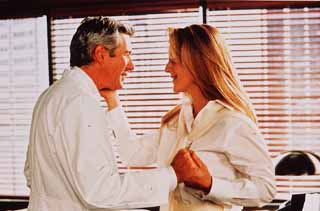 Dr. T and the Women

Dr. T and the Women

After serving up a sweet Cookie with their well-regarded first collaboration, veteran director Robert Altman and new screenwriter Anne Rapp hope audiences will wash it down with some spiced T. The team's follow-up to their critically acclaimed 1999 sleeper Cookie's Fortune, a humorous and endearing look at life in a small Mississippi town, is Dr. T and the Women, an altogether broader and more farcical tale set among the Dallas elite. Gere is, in the words of Altman, "a pussy-whipped Dallas gynecologist" who's desperately seeking relief from a midlife crisis while simultaneously trying to cope with the impending wedding of his Dallas Cowboy cheerleader daughter (Almost Famous' Kate Hudson); the antics of his estranged -- and increasingly strange -- wife (the occasionally strange Farrah Fawcett); the attentions of a sister-in-law with a champagne jones (Laura Dern) and a deeply devoted nurse (Shelley Long); an intriguing woman he meets on the golf course (Helen Hunt); plus an assortment of colorful, somewhat trying, female patients.

Altman calls it "a movie about chaos," which seems an about-face from the laconic ambling of Cookie's Fortune. That picture took a kind of surety and emotional focus from Rapp's intimate sense of small-town Southern living. Will the strengths she brought to the leisurely existence of little Holly Springs transfer to frenzied Big D? Well, Rapp certainly knows the territory. She's a Lone Star native, reared on a cotton farm near the West Texas town of Estelline (pop. 200) and graduated from Wayland Baptist, where she played basketball. And professionally, she's helped put Texas onscreen, serving as script supervisor for Robert Benton's Nadine and Places in the Heart, David Byrne's True Stories, and the Horton Foote drama Tender Mercies.

From on-set reports, the three months on location in Dallas sound like a vintage Altman shoot, with plenty of parties, wild incidents, and acerbic comments from the director. "That was absolutely adequate!" Altman reportedly told Helen Hunt after a swimming scene. And he supposedly welcomed Shelley Long to the set with a comment to the effect of, "I heard you were a real pill to work with on Cheers." In what might have been an uncharacteristically generous gesture for Altman, he arranged for a closed set to shoot Farrah Fawcett dancing in the nude. But according to a published item in The Dallas Morning News, the 53-year-old actress was "outraged" she wouldn't have a crowd watching. "I am proud of what I have got and I need an audience," she is said to have told him. And she got one. (The News also reported that Altman spent two nights filming Fawcett "skinny-dipping" in the Dillard's fountain at the NorthPark shopping mall without mall management's knowledge.)

Early buzz has preview audiences considering the movie a little far-fetched. Altman has conceded that "it might feel a little over the top,

but it's not such a stretch from real life." That, however, is as far as he'll go in qualifying the quality of his latest picture. "There's not a false move in it," he's been quoted as saying. "Dr. T is as good as I can do. If someone doesn't like Dr. T, all I can say is that I can't do any better. Everything came together on this picture. It just all worked." (Oct. 13)