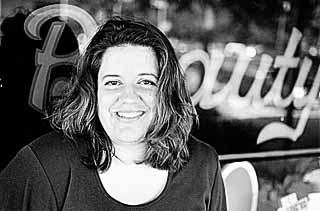 July 21, 1997, Monday: I don't know why, but a lot of times I have nightmares about fish. ... Dreams in which we have a bunch of ugly, spooky fish in our aquarium, and the lid is missing, and the fish float out of the top and through the air, because they're like Wile E. Coyote when he runs off the cliff but doesn't yet realize that he should be falling. In those dreams, I'm always trying to get the fish back into the aquarium without actually touching them.

Sometimes real life is far more fantastic than fiction. And if you muck through the vast world of online diaries, you realize the opposite is true. But even those serve their purpose -- it was one of the insufferable duds that convinced Gwen Zepeda Effinger that she could do better. Even when Gwen has an unfantastic, nothing-happens sort of day, or just writes about her dreams, you're glad she's putting it online.

That's because her unaffected, racing prose and her wry observational power makes those entries a joy to read. It's also her atypical life -- for a 28-year-old with a Web site, anyway -- that makes her someone you want to check in on every day. "I Am a Trailer-Trash Housewife (and I Bet You're Jealous)," trumpets the front page. Gwen does live in a trailer -- well, a manufactured home, technically. A blue one, on the outskirts of Austin, that she shares with her husband and three boys. She has undertaken the occasional part-time job, but now she just enjoys her freelance writing jobs and her opera lessons. She's a woman who can enjoy fabric paint as much as the Flaming Lips, and somehow not make that seem like a weird juxtaposition, or buy crochet magazines in the local porn shop because they have a more extensive selection of them than you'd expect.

The diary, "Gwen's Petty, Judgmental, Evil Thoughts," (née "Gwen's Complaints and Dronings"), is couched within her larger guide to the double-wide lifestyle. In "How to Be a (Lower-Middle-Class or Lower Than That) Housewife," she responds to the frequently asked question "So what's a smart lady like you doing being a housewife?" with "Avoiding people like you." She details the Seven Deadly Chores, and lists 100 things to do at Wal-Mart (#33: Put your kids on that little 25-cent airplane ride next to the bubblegum machines that plays the first half of "Highway to the Danger Zone" over and over again. #62: Walk around with all your friends, wearing really big pants. You're so cool!)

Gwen kept paper-and-pen diaries before she went online. "I have about six of them that I kept since I turned 18," she says. "I had ones before that, but I threw them away because they were too embarrassing. Even the 18-year-old one is embarrassing. Thank god I went through that stage before the Internet happened!" She still keeps a modest offline diary, just to keep lists like what gifts she has given and received. Not for the purpose of making sure the exchanges are even, no: It's for posterity.

"I used to have this fantasy that somebody would find my journal. On those quilting shows, the big thing, if they're not buying antique quilts, they're buying these journals of the pioneer women." She switches to a half-yearning, half-mocking voice. "'Oh look, she bought this fabric. She made this quilt. She even made the pattern! What a find! I'll pay $10,000 for this!'" After a pause, she adds, "Wouldn't it be cool if someone a hundred years from now found my journal and reads about what I got for Christmas from my husband? It's a historical record. It's a record of somebody's life. Somebody will be interested in that in the future."

One of the most perplexing things about some online diarists is their treatment of their archives as sacred -- rarely, if ever, do they take entries offline, no matter how embarrassing or ugly. As far as having them available for anyone to read, this practice remains a grand experiment in disclosure, but when these diaries are considered historical records, it becomes more understandable. "You have to keep the good and the bad," Gwen explains. "Because if you go back and erase the bad parts, it's not the truth. It's not the truth. If I wanted to write about only the good things, I would write Chicken Soup for the Soul-type crap instead of writing my journal."

With mountains of entries dating back to June of 1997, this trailer-park diva is also one of the pioneer women of the online diary. She says she has yet to figure out her site's hit counter, so she doesn't know how many readers she has, but her e-mail list to notify people when she updates tallies 150. Of them, there's only a few that have gotten overly eager to be her buddy, but as soon as she ventures into trash talk, she backpedals.

"I have a sick need for attention. I mean, I say, 'Oh, they like me too much,' but I know if tomorrow they suddenly stopped I'd get totally depressed. I'd miss it."

Gwen's Petty, Judgmental, Evil Thoughts is at www.gwentown.com. Gwen also leads a video tour of her trailer park and its inhabitants at www.backslap.com.