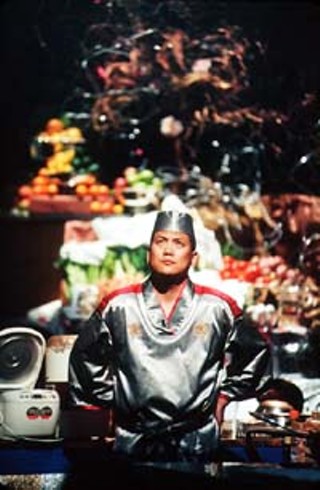 If my memory serves me right, I first wrote about Iron Chef a year ago, around the time the Food Network first started carrying the Japanese import nationally. Today, it is one of the network's most popular shows, and it's certainly a favorite in my house, which is saying a lot. Papi Chulo, a die-hard sports fan, turned up his nose at the very suggestion that he watch a cooking show. Now he's hooked to a degree that surprises even me. What is Iron Chef? For the uninitiated, here is the basic, no-frills premise: It's a cooking show that pits two world-class chefs against one another. One chef is an "Iron Chef" (chosen from the show's stable of four), the other is usually from Japan but sometimes from another part of the world. Each chef is a master of one of the world's major cuisines -- Chinese, French, Italian, and Japanese, of course, though a chef specializing in Mexican cuisine was on the show once. The goal? To complete a multicourse meal in an hour, using a theme ingredient (revealed at the last moment). A panel of judges tastes, comments, and scores the meal. The winner is chosen, and, well, that's it.

I didn't mention the pageantry, the smoke and lights, the play-by-play action, the melodramatic music, the egos and grudge matches, or the amazement that comes when spectacular dishes appear before your eyes from theme ingredients that can be as ordinary as rice or broccoli, or as exotic as eel or ostrich eggs. There's the Kitchen Stadium where the cooking battles take place (yes, they're called battles), the Royal Box where dignitaries watch the action from above, and of course Takeshi Kaga. He's the flamboyant host, otherwise known as Chairman Kaga, who starts the show with his endearing if somewhat ridiculous opening ("If my memory serves me right ...") as he introduces background footage on the show's challenger, and whose urban Liberace wardrobe can literally leave you speechless. And then there's the gold bell pepper from which he takes a large, deliberate bite, expressing the pure joy to be found in food that is at the heart of the show.

That's Iron Chef on an ordinary day. To see it kicked up a hundred notches, you must tune in to the Food Network Special: Iron Chef NY Battle on Sunday evening. The two-hour special is really two episodes. Part one explains how Tim and Nina Zagat, publishers of Zagat's Survey, a compendium of facts and reviews of world-class restaurants around the globe, came to invite Chairman Kaga and the Iron Chefs to New York for a special battle. Part two is the actual battle itself, held in Manhattan's popular night spot Webster Hall. (Warning: Spoilers ahead).

Chosen to do battle with Iron Chef Japanese, Masaharu Morimoto, is Manhattan-based chef Bobby Flay. He is chef and owner of two New York restaurants, Bolo and Mesa Grill, and star of his own cooking show on the Food Network, Hot Off the Grill With Bobby Flay. Flay's cuisine, combining influences from Mexican, French, and U.S. Southwestern tastes, has been described as "revolutionary"

Fans of Iron Chef already know that Morimoto is the chef at Nobu, a four-star Japanese restaurant in the Big Apple. His neo-Japanese style draws praise from his fans and ire from his more traditional contemporaries in Japan. (One competing chef, intent on defeating Morimoto on an Iron Chef episode, said, "I've got to beat that GI Joe expat!" If memory serves me right, the opponent went down.) There seems to be no middle ground when it comes to Morimoto.

What makes the special so enormously entertaining are several elements not present in the regular IC series. First the live, very vocal audience, including a young boy who traveled with his parents from Phoenix to see his idol Morimoto. Second, the delight and surprise the Iron Chefs have at realizing they have a following in the states. The third element is seeing this Japanese product given a U.S. spin, but translated through a Japanese lens. Perhaps it's no accident, then, that the Americans -- Flay in particular -- come off as crass. The height of Flay's boarishness comes at the end of the battle, when he makes one of his kitchen helpers hoist him onto the counter where he stands on top of his cutting board, holding his arms aloft in victory. High drama ensues when Morimoto loses his cool, saying Flay is not a chef because of the gesture.

"Cutting boards and knives are sacred to us [Japanese]!" an appalled Morimoto says. But he regains his composure, and it's on to the tasting segment, where Donna Hanover (a sometime Food Network hostess), the Zagats, and a lucky man drawn from the audience gets to savor the dishes, comment on them, and cast their votes.

Who Are Those Other Guys?

Gordon Elliott, host of Food Network's Door Knock Dinners, served as host of Iron Chef NY Battle when it was filmed March 14. The Japanese-produced special smartly casts him to the background in favor of their own play-by-play commentators. Chief among them is Kenji Fukui. Though not seen onscreen, his commentary and chatter with the judges does a great job of answering those questions you find yourself asking at home ("Is it alive? Why yes, it looks like live eel!"). In the special, he mostly commiserates with Dr. Yukio Hattori, Iron Chef's regular "color commentator," who offers ideas on the properties of different foods and spices and other culinary tidbits. Replacing Mr. Ota as the floor commentator in the special is a former Fuji Television newscaster now living in New York, Tomoko Nagano. An American fluent in Japanese, Dave Spector rounds out the commentators.

Who will win this battle? I can't give that away. See for yourself on Sunday, 6/25, 8pm on the Food Network. The special repeats on 7/1. Check local listings to confirm air dates and times or visit the Food Network's Web site: www.foodtv.com.