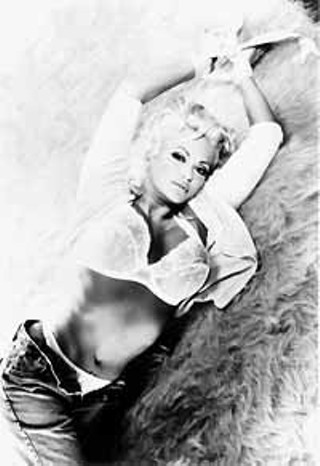 Long the province of dirty old men and the raincoat brigade, adult videos and all the accoutrements of that industry have broken into the mainstream in ways unthinkable only a decade before. Case in point: Gregory Dark, former Dark Brother and mastermind behind such adult video fare as New Wave Hookers I-IV, has recently taken to helming MTV staple videos, chief among them teen Lolita pop phenom Britney Spears' "... Baby One More Time." And he's not alone. When the boundaries between old-school stick 'n' stroke pornography and new-school, above-ground tease flicks becomes as blurred as this, whither porno? And for that sake, whatever happened to Hef's fabled girl next door? Christine Fugate's new documentary on two years in the life of rising porn star Stacy Valentine goes a long way toward answering query No.2. The Girl Next Door, which follows the soon-to-be buxom blonde Valentine's (neé Baker) transition from suburban Tulsa housewife to supervixen is downright melodramatic at times: There's a beached marriage to a hometown sweetheart, sudden financial success, and some truly disturbing images of what, exactly, goes on inside the plastic surgery theatre. The fact that Fugate (Tobacco Blues) has shot the whole thing from an unintrusive, fly-on-the-wall perspective makes it that much more compelling. It's a remarkable work about a young woman who, equally remarkably, managed to find personal and artistic freedom not in the traditional milieu of motherhood and apple pie but instead amidst Los Angeles' thriving adult film industry. And to top it off, Valentine comes across as normal as any other young woman pursuing her dream in the City of Angels. The fact that she does so by having multiple males penetrate her every opening amidst surrealistic flows of ChemiFog and blue-gelled strobes is nearly beside the point, though Fugate's documentary does offer a good, hard look at America's favorite voyeuristic pastime while focusing on Valentine's spectacularly average travails.

America has always had a bizarre duality to its love affair with blue movies. Since the advent of affordable home video cassette recorders in the early Eighties, porn has consistently trebled its rental numbers each year, with the occasional growth, uh, spurt now and again. Adult films are a multibillion-dollar industry, and though they still carry that vague Puritan stigma to them, that same dark cachet renders them appealing to young couples, coeds, and the ever-dwindling dirty-raincoat crowd. There's no escaping the fact that naughty movies are fun. Fugate's film manages to put a person -- and personality -- to the eyes, lips, breasts, and booty of the iconic American porno star. Far from mirroring the public's jaundiced perception of the typical adult-film actress -- sex, drugs, and eventual suicide or death by STD -- Valentine comes off as a competent woman who just happened to luck into a situation that was right for her at that particular moment. In The Girl Next Door, it's plain to see that Valentine revels in her position(s), and although she retired from the business last February to initiate her own clothing line, she bears none of the emotional scars you'd think such a profession would engender. She's not the most trusting of people, sure, but living in L.A. for four years will do that to anyone.

During the two-year course of The Girl Next Door, Valentine has her share of what she tactfully refers to as "roller coasters": Nominated for entertainer of the year by the Adult Video News Awards, she travels to Las Vegas for the ceremony only to lose out to another starlet. Fugate catches her hours later at her hotel, curled up in bed, distraught and brooding. It's not until later that she finally gets the recognition and the award she seeks -- in France. She promptly calls her mother back in Tulsa to tell her the good news. It's a telling scene, that this literal girl-next-door-cum-sex-queen thinks to call mom first and foremost. How many mothers would be so pleased with the news that their daughter had won an award for, well, you know?

"I was really impressed with Christine's ability to capture the emotions involved in the industry," says Valentine. "You really do go on that roller-coaster ride with me. Nobody's life is perfect and up all the time, but I think it's great how people -- especially women -- relate to the movie and relate to me because I go through the same things everyone else does. I feel fat, I'm lonely, it's not always that great. But then, how do you know what the great times are if you don't experience the lows as well?"

Porn's detractors, of which there are many, decry the industry's glamorization of some mythical feminine ideal: Big breasts and a Coke-bottle figure have always gone hand in hand with stag movies, and to that end, Valentine estimates that 98% of the women in the industry undergo some sort of body augmentation or enhancement, be it collagen injections to plump their pouts or breast modifications to make them a bit -- or a lot -- more top-heavy. Valentine is no exception, and Fugate's camera follows her into the doctor's office -- and from there right into the marginally horrific surgery itself -- to view the act of narcissistic self-improvement in all its gooey glory. These scenes of Valentine's body modification are among the film's most alarming, with huge, thick liposuction needles poking into the starlet's thighs in a garish and gory parody of the sex act itself. Still, this is something Valentine wants, and perhaps even more importantly needs, for her to construct the image she aspires to. It's not the most pleasant thing to watch, or endure, but according to Valentine it's necessary for longevity in the business.

"Eighty-five percent of girls who enter into the adult film business are out within one year, but those who stick around usually end up having some form of plastic surgery," she says. "You have to be very strong to continue in this business. It's not always easy, and it's not always really that glamorous. There's a fantasy, that perception that people have of what it would be like to make adult movies. The real thing is quite different."

Valentine confesses that like so many other young women, she was dissatisfied with her body growing up. While still in Tulsa, and at the urging of her husband, she had her breasts enlarged to fulfill her own personal vision of what she should look like. During the course of The Girl Next Door, she has her bosom downsized to a more manageable measurement. Is this back-and-forth set of surgeries a direct result of society's impossible demands made on women in the name of beauty, and if so, wasn't this just another form of reinforcing stereotypes she herself disbelieved?

"Yeah, that had to do with it, wanting to fit that fantasy image," says Valentine. "Sure. With fashion magazines and Ally MacBeal and things like that. I know that's not healthy for our society. Absolutely not. I love big breasts, though. That is the way I've been programmed, that's feminine, that's more womanly to me. And so, I guess I'm contributing to the perpetuation of that stereotype, but there I am. It's all done."

"Oh yeah," she says, "the best thing about what I do is the sex. I love my job. I love being on set and working with these beautiful people and getting to call my own shots and dictating who I work with and where I work with them. It's kind of empowering in a way, because I do get to make those crucial decisions. In the adult business, the women, the female talent, we're the ones who control it. It's not the men. We make more money than the guys do. And coming from being a housewife in Tulsa who was pretty much dependent on her husband to being able to call those shots, I really like that. It's a feeling of financial security."

And while Dark and his brethren make a bid for popular recognition, an untold number of young, would-be studs and starlets are picking up and heading west to Los Angeles, home-vid demo reels in tow, to try their hands (and genitalia) at making a name for themselves in what used to be a deeply shuttered industry. No more.

The Girl Next Door opens at the Dobie on Friday, June 23. See Film Listings for review.