Shoot for the Stars

Downtown Filming Winds to a Close 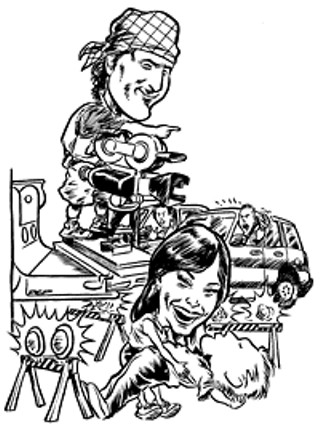 With two major Hollywood productions shooting downtown this summer -- Robert Rodriguez's Spy Kids and Donald Petrie's Miss Congeniality with Sandra Bullock -- both foot and automobile traffic have been occasionally disrupted. Pile that on top of the general air of perpetual construction and street closings brought on by Austin's downtown boom, and you've got the ingredients for some short fuses and frazzled shoppers. Of the two films, the Rodriguez production seems to have ruffled the fewest feathers. Principal photography began on March 20 and wrapped June 7, with the shoot spread out over several Austin locations, including soundstages at Robert Mueller Airport, the Trois Estate at Lake Travis, and in (and on the roof of) the Millennium Center across from Ruta Maya coffeehouse at Fourth and Lavaca.

Paulina Pacotti, Ruta Maya's office manager, noted that most patrons had fun just sitting around watching the action across the street. "[The production] compensated us on some of the hindrances, actually. They had to take up some of our parking spaces and then they brought in some of their own business as far as crew members just coming in and buying coffee."

The film stars Antonio Banderas and Carla Gugino as a husband-and-wife spy team who must be rescued from the bad guys by their two young offspring (Alexa Vega and Daryl Sabara). While additional aerial photography will take place in Chile, the film made the most of its Austin locations to the point where, according to unit publicist Sondra Condito, the out-of-town crew members are in no hurry to leave.

"When you're here for two and a half months -- even longer in the kids' cases -- it kind of becomes your home," she explains. "I'd have to say that everyone involved with the film that doesn't live here is leaving with an awesome sense of Texas and Austin in general, but with a really great sense of sadness as well. You really become a 'resident' of a place when you're on a long shoot somewhere else, as opposed to doing a week or two somewhere where it's more like a vacation. Everybody here has been here for months, and they're definitely leaving with a huge sense of the city. I have to be honest: It's going be sad."

Bullock's FBI caper comedy Miss Congeniality (which also stars William Shatner, Candice Bergen, and Michael Caine) has taken some flack, however, for tying up Austin's arts district at Fourth and Colorado and unavoidably slowing traffic to a crawl as the production spent two days shooting in and around Starbucks Coffee at Sixth and Congress.

"What can I say about Miss Congeniality shooting outside?" asks Karrie League of the Alamo Drafthouse Theatre. "They were of the type that thinks that it's easier to get forgiveness than permission."

"It was tough," adds League, "because they were blocking off the street to foot traffic and so we asked if they would escort people to our door. Sometimes they did and then sometimes they just told people that we were closed."

Gabriel Shelton, assistant manager at the Cue Lounge, has nothing but praise for the production, saying that due to a planned renovation at the Lounge, the fact that the film hiccupped their business was hardly noticed.

"It went fine, and they compensated us really well," says Shelton. "As far as while they were actually shooting, I know they annoyed a lot of the neighbors, but they told us that they would compensate any sort of inconveniences that they caused. As far as I know, the movie people were generally agreeable to our needs. We were definitely pleased with the situation."

Bottom line? Despite the revenue major studio productions bring to town, some hassles are a given when shooting on location. Not everything can be caught on a soundstage, and the stop 'n' gawk nature of illustrious star power in our midst ("Hey, is that ... Captain Kirk?!!") only makes things stickier. But bear with us -- both shoots are virtually complete, and then it's back to business as usual. That's right: endless construction, surly workers, and a gritty walk to work. Ya gotta love it.

Information on downtown street closings -- film-related or otherwise -- can be found on the Web at www.downtownjam.com.