Shoot for the Moon

Before Spy Kids' Danny Trejo Played the Bad Guy, He Was One 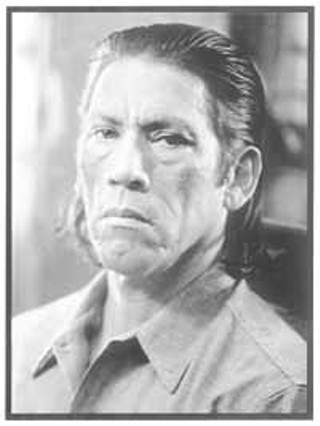 The busboys at Güero's stare at Danny Trejo hesitantly, unsure if they should ask him for his autograph. At Travis High School, where he has come to make a presentation, students and teachers alike nervously clamor around the actor with their Sharpie markers and Polaroid cameras. The apprehension of Trejo's fans no doubt stems, in part, from the physical attributes that have made him such a perfect bad guy for the silver screen: His sunken, beady eyes and weathered complexion are a roadmap of experience; his dark, leathery skin is masked by tattoos. "How much did that cost?" inquires a teen boy with electric pink hair.

"Eleven years," the actor replies with a smirk.

Before Danny Trejo was an actor, he was a convict, one who spent nearly 15 years in "every penitentiary in the state of California" -- on charges ranging from drug trafficking to robbery. These days, Trejo is recognized as Razor Charlie, the knife-wielding thug in From Dusk Till Dawn, or as Johnny-23, the serial rapist in Con Air. He has appeared in more than 20 films, including Michael Mann's Heat and John Frankenheimer's Reindeer Games, usually cast as a derelict or small-time thug. But on this May afternoon, he is appearing at Travis High School not as Danny Trejo the actor, but as Danny Trejo the reformed criminal -- husband, father of three, drug and alcohol intervention counselor to many, and youth outreach advisor of East Los Angeles' program for young fathers. While in Austin shooting director Robert Rodriguez's new caper Spy Kids (see "Shoot for the Stars," p.62) Trejo has volunteered (yes, volunteered!) his time off to speak to a group of some 50 students at the Eastside high school -- many of whom he recognizes as carbon copies of his former self -- all in an effort to address issues of drug abuse, education, and crime. Trejo doesn't want to impress the students with Hollywood gossip or movie set anecdotes. He wants to share with them the secret of his success, something that came to him when he discovered and adopted a simple, life-affirming mantra -- "good things happen to good people."

Danny Trejo is living proof that good things happen to good people. Witness his prolific film and television career, which was jumpstarted as result of his desire to help a friend in need. When Trejo's term in California's San Quentin concluded in 1985, he finally gave up drugs and alcohol. "I knew I had a choice to make," he admits, "whether I was going to spend my life in prison or whether I was going to try something different." That something different arrived when he became a drug and alcohol intervention counselor, a job which forced him to come face to face with his longtime drug usage. While Trejo succeeded with his cold turkey approach to quitting, some of his friends had a harder time resisting temptation. When one of those friends, an 18-year-old recovering addict, nearly fell off the wagon for a line of cocaine, Trejo decided to distract his friend by visiting him at work ("I hang out with people who want to stay clean"). That friend worked as a production assistant on Runaway Train, an action film starring Jon Voight and Eric Roberts as prison escapees who board a speeding freight train about to derail. Trejo suddenly found himself surrounded by hundreds of extras draped in designer prison duds. While biding time with his friend, a crew member approached Trejo with a question.

"Can you look like a convict?" the man asked him.

Trejo was back in prison blues before he could answer ("I just looked hip," he brags). Later, a former San Quentin inmate on the set recognized Trejo as the lightweight boxing champion of the south block and landed him the position of personal fight trainer to Eric Roberts for a fee of $350 per day. Three weeks later, Danny Trejo's Hollywood introduction was complete, and his friend was still clean.

"When I got my first paycheck I thought they made a mistake!" he remembers. For the first time, he was within grasp of something that had always eluded him -- success -- and Trejo worked furiously on a string of films, channeling the rewards to his children ("They thank me for having them when I had money"). So it came as a great surprise to Trejo in 1993 when he was sent back to San Quentin, this time under circumstances much different from his previous visit: Art was imitating life.

"I did a film called Blood In ... Blood Out, and I spent about six weeks in my old cell. I had done 18 months in cell c550. We filmed in cells c545 to c550," Trejo remembers. Having come so far, Trejo could barely look back at the life he used to live. "Every morning before shooting I would stand there crying. It was unbelievable."

How Much Did I Make Each Month?

The students of Travis High School don't like surprises.

"Why the hell am I here?" one of them yells across the classroom, a drab, sterile room with pale gray walls and rows of identical desks.

"Why don't you wait and see?" a teacher barks back, clearly tired of these sort of exchanges.

"Why don't you treat me with the respect I deserve?" retorts the student, shades of Mommie Dearest.

When Danny Trejo enters the room, the bickering stops. Students who immediately recognize the actor whisper to their neighbors of Desperado, Heat, and The Replacement Killers. Trejo seems like a bit of a walking contradiction today. His penetrating, authoritative looks are set off by an earnest boyishness that comes from his cheek-to-cheek smile and a clothing ensemble that includes Old Navy cargo shorts, sparkling white Nike sneakers, fitted gray V-neck.

"My name is Danny Trejo," he begins, "and I'm an actor." Hundreds of inquisitive eyes stare ahead at the actor. "I was a horrible person for the first 25 years of my life."

A few students lower their brows. Others look around at fellow classmates or reach into their bags to reposition pagers and cell phones. "I've been to that place where the most important thing is how good you write on the wall. I used to think my barrio, Pacoyma flats, was the world. It was sad. I lived in a tiny, cave-like world."

Trejo recounts bits of a childhood steeped in mischief. "When the police used to surround my house, my mom was the one yelling, 'It's okay! It's his friends' fault!'" Trejo summarizes his teenage years -- in and out of juvenile hall, bouncing from one school to the next. From the back of the classroom, a student asks how it all started. "Everybody that I have ever met in prison, [it] all started with reefer. People think that weed isn't addicting. I don't know where they get that from!" Trejo pauses to re-enact the years he spent in his quest to get high, squinting his eyes and taking a hit from an imaginary joint. A few students clap. They know the drill. But what's the point?

"Educated people don't go to the penitentiary," he states matter-of-factly. "I go to a lot of prisons and youth authorities now, and I always ask people if they have a diploma. In San Quentin, Folsom, out of 200 -- maybe 20 have one." This is the reason Trejo is here today, to impart this hard-earned knowledge. "People without money only think to high school. People with money think to college."

Trejo poses a mathematical question to the class: "I once made $5,000 on a robbery." Eyebrows arch in response to the accomplishment. "Then I did three years." Facial expressions sour. "How much did I make each month?" A few students attempt mental arithmetic as Trejo whistles the Jeopardy tune.

"A hundred dollars!" one yells, incorrectly. Trejo isn't concerned with specifics; he's made his point. "When you put a bunch of money against three years, it's not very much. Yet you won't work for minimum wage on the street?" The flummoxed faces of some 50 teenagers stare ahead at Trejo. "I've come to realize that everything you learn on the street is absolutely of no value. Everything you need to be successful is right here." Trejo points to the computers located along the sides of the classroom. "There is no success without education. My education came from 11 years in the pen.

I Would Rather Shoot for the Moon and Miss ...

When Danny Trejo finishes speaking to the students of Travis High School, they ask about his film career. He tells them about his experience with "the amazing" Robert De Niro and his "good friend" Val Kilmer on Heat. He briefly touts his role as the "cool uncle" in Spy Kids, a role he compares to Q in the James Bond films. But he refrains from sounding overly privileged in front of the teenagers. "I don't make a moral judgment on anybody. It would be against God's will. He brought me back from the dead," Trejo says. Poised for continued success, Danny Trejo the actor prepares to wear the hat of Danny Trejo the producer (for Steve Buscemi's film The Animal Factory, due this summer). Trejo summarizes his life quest with a personal adage: "I would rather shoot for the moon and miss than shoot for the gutter and make it."