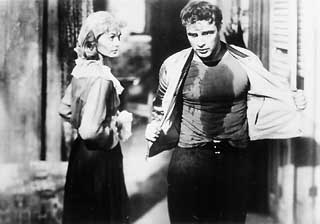 "I've always depended on the kindness of strangers" is a very difficult line to read convincingly. Recent years have brought us a plethora of Blanches DuBoises. Just ask Jessica Lange or Ann-Margret how hard that line is to read -- neither of them came close to convincing us. But Vivien Leigh -- the ethereal beauty and vastly skilled actress who brought us the immortal Scarlett O'Hara -- utters the line in a way that makes the heart ache. Leigh, who won the Best Actress Oscar for her performance, plays the seminal Blanche. She is flighty, unstable, and riddled with neuroses, a creation that is the very apex of Tennessee Williams' dysfunctional but immense creativity. Her character is strongly contrasted by Marlon Brando's crude, Neanderthal-like Stanley Kowalski, and both of them, perhaps because of their personal parallels to their characters, excel at playing these parts. The recent re-release restored several minutes of sexual tension to the film that had been hacked out by the censors, notably filling out Kim Hunter's Oscar-winning role as Blanche's beloved sister, Stella. Despite the stifling mores of the Fifties, the film also garnered awards for Karl Malden and for Best Art Direction. (6/4-5)