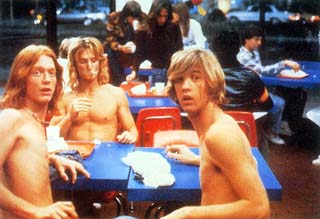 "That was my skull! I'm so wasted!" "I don't hear you unless you knock." "All I need are some tasty waves, a cool buzz, and I'm fine." "People on 'ludes should not drive." At 13 years old, I believed these lines were the work of an obvious comic genius. Along with sayings from (among others) Ferris Bueller's Day Off, Bill & Ted's Excellent Adventure, and Monty Python and the Holy Grail, the lines were used as a handy litmus test to determine the coolness of strangers -- the possibility of our lifetime friendship ultimately hinging on whether or not you knew what I meant when I said, "Aloha, Mr. Hand." Eventually, I found other ways of meeting people (like talking!), but every once in a while, without warning, I hear a phrase -- "No shirt. No shoes. No dice." -- and I am immediately made aware that ... there are others like me. Amy Heckerling (Clueless) made her directing debut with this adaptation of a book by then-Rolling Stone reporter Cameron Crowe, who spent a year undercover as a high school student in Southern California. The dialogue is classic Eighties, especially the phrases spoken by Sean Penn's endlessly imitated stoner Jeff Spicoli ("Awesome! Totally awesome!'), and the scenes of teen life will bring back memories for anyone who spent summer days in food courts or arcades and the nights climbing out bedroom windows with the hope that mom and dad wouldn't wake up. Underneath all the zany juvenile delinquency, however, Fast Times tells a sad story, about teens who dive into sex way too early and pay the consequences for their own naiveté. The bad ideas in this film would provide enough fodder for a semester-long health course -- whether it's Stacy and Mike's poolhouse rendezvous or Spicoli's joy ride while stoned or the utter tastelessness of leg warmers and heels. They're funny and cringe-inducing moments not because these kids are such idiots, but because we've all been there. As Stacy's brother Brad would say, "Learn it. Know it. Live it." We did. (8/18-19)