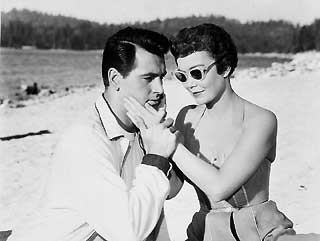 In this remake of John Stahl's 1935 film, Hudson plays a drunken playboy who mends his ways and becomes a surgeon in order to repair the eyesight of the woman (Wyman) he blinded in a car accident. This outrageous story was a success and sealed Hudson' stardom.

Adapted from William Faulkner's novel Pylon, The Tarnished Angels is one of Sirk's few movies with a high-art source. Filmed in black-and-white, the movie is about flyers and airplane culture. Says German director Rainer Werner Fassbinder: "Sirk looks at these corpses with such tenderness and radiance that we start to think that something must be at fault if these people are so screwed up and, nevertheless, so nice. The fault lies with fear and loneliness. I have rarely felt fear and loneliness so much as in this film."

Fred MacMurray is a prosperous businessman and husband whose middle-class life is in such a rut that he considers throwing it all overboard for his old flame Stanwyck. The most vocal objections come from his spoiled, self-interested children, who (as in All That Heaven Allows) become society's staunchest upholders of the status quo.

"It was a piece of social criticism, of the rich and the spoiled and of the American family, really," Sirk commented in retrospect about this movie. This wild story about a drunken, paranoid playboy (Stack, in maybe his very best performance), the woman who loves him (Bacall), the man who loves her (Hudson), and the half-sister (Malone) who loves him. This oil-family story is way east of Eden.

Jane Wyman is a proper middle-class widow who falls in love in love with the gardener (Hudson) who prunes her bushes. Not only is there a problem with his social class and his belief system (he reads Thoreau), the man is 15 years her junior. Her grown children and her country-club circle are scandalized.

A Time to Love and a Time to Die

Filmed in Germany and in CinemaScope, the story is based on the Erich Maria Remarque novel A Time to Live and a Time to Die. Changing "Live" to "Love" in true Sirkian fashion, the story is about two lovers brought together because of the war and kept apart by the same token. Says Sirk: "What interested me was a landscape of ruins and the two lovers. But again, a strange kind of love story, a love conditioned. Two people are not allowed to have their love. The murderous breath of circumstances prevents them. They are hounded from ruin to ruin."

Lana Turner and Juanita Moore each play husbandless women in New York raising daughters on their own. One woman is white and the other is black. They set up a domestic arrangement in which Turner pursues her acting career while Moore stays home and tends house. Their daughters are brought up together. When Turner becomes successful, the women's relationship, although intimate, assumes more the pattern of employer and maid. Meanwhile Turner's daughter grows up to be Sandra Dee, who falls in love with her mother's love interest, and Moore's daughter grows into an angry, light-skinned dancer, who abandons her mother and passes for white. The film is a biting critique of American race relations in the Fifties and a complex study in contrasts and paradoxes.

The Austin Film Society's Douglas Sirk in the Fifties series, "The Subversive and the Soap Opera," screens on Tuesdays at the Paramount Theatre, May 16-June 27, at 9:30pm. Admission is free as part of the Film Society's Free Cinema Series.