You Talking to Me? 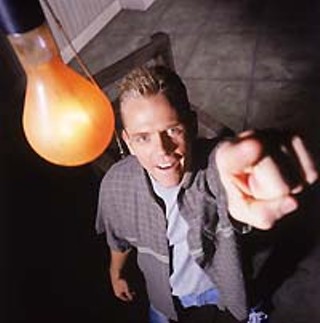 The strangely appealing Titus, one of many shows using the "direct address" technique

Maybe it's the literal size of the television set that makes it most suitable for gazing at events that are none of our business. Forget those large screen TVs. They're best for watching movies or sporting events. There's something about the size of an ordinary television, a relative peephole to the rest of the world, that encourages viewers to sit riveted to the screen watching O.J. Simpson drive aimlessly down a California freeway, the astonishing events at Waco, a bird's-eye view of a school shooting in action, the capture of Elián González, the explosion of the federal building in Oklahoma City, Princess Diana's fatal car accident, or the live marriage of a "multimillionaire" to a game-show contestant bride. Can you imagine watching these events in a movie theatre in the company of strangers? Something about it seems lurid and kooky. Besides that, it would blow your cover. No one has to know you watched nonstop coverage of Princess Diana's death, teary-eyed from the first reports of her car accident to the funeral a few days later. There's something about television's intimacy, the sense that you are being taken into the heart of the event, not to mention its easy accessibility, that makes observing these events acceptable, even desirable. That, and the fact that people are overwhelmingly nosy. Take the high road if you think you must, but there's a little bit of Bewitched's Mrs. Kravitz in all of us. Behind the blather about social context, cultural criticism, and human behavior, most of us harbor an inner busybody.

Perhaps, then, it was only a matter of time before the proliferation of confessional dramas and comedies gained appeal with viewers. The overwrought Once and Again (ABC), which critics (excluding this one) adore and fans have taken a shine to, features face-the-camera moments when the viewer gets an exclusive glimpse into the heart and mind of a character. Lest we miss the fact that we're watching a "moment," these scenes are conveniently shot in black and white.

However, it was the Fox network who really dove headfirst into featuring direct addresses to the audience -- with mixed results. The family drama Get Real used it to exhaustion, as did the now-defunct Action. But it wasn't until Malcolm in the Middle and the strangely likable Titus that two successful formulas appeared.

Part of the appeal of these two shows (and their less sophisticated reality-show cousin, Cops) is the perceived degree of distance and intimacy the viewer receives at different moments of watching. Using a mixture of direct address, voiceover, and out-of-sequence shots that visually illustrate the pathos of a moment, Malcolm succeeds because of the charming Frankie Muniz as the title character. Malcolm's world view is the point of departure for viewers, and his world is so wacky, you can't help being swept in.

Then there's Titus (Mondays, 7:30pm, Fox). I've watched this half-hour comedy several times and have found myself liking the show more and more. It's hard to pinpoint what I like about it, particularly since lead character Christopher Titus' view of the American family is far from rosy and sometimes downright crass. It's not the direct-address device, which can sometimes come off as a gimmick, but other times works like a charm. It's not even the casting of Stacy Keach, who is marvelous as Christopher's father, the brittle Ken Titus. It's Titus himself who celebrates the cursed events that shaped his life as a self-effacing troubadour, and furthermore, takes responsibility for the good and bad decisions he makes in his life.

Comparisons to monologuist Spalding Gray (Swimming to Cambodia) are not far-fetched, given that Titus' one-man theatrical performance Norman Rockwell Is Bleeding is the source for his television show. In fact, Titus could take some lessons from Gray in toning down the erratic camera movement that almost always accompanies his direct address moments to the camera. While telling the stories of his life, Gray often addresses the audience, standing or sitting, with very little movement. Yet his one-man shows are always engrossing.

Which goes to show that perhaps it's not just the busybody in us that pulls us to the small screen to follow the details of this major news event or that confessional comedy or drama. It's the draw to the story. People always want to know how something happened, what people did in this or that situation, how they felt, how they coped, if they survived. Whether the story is "real" or not is not as important as the quality of the story: It has to be good, in whatever way the viewer defines "good."

It's strange that during the explosion of communication and entertainment technology -- cable television, Webcasting, DVDs, VCRs, the Internet, and the rest of it -- what is central is the search for hearing a good story. Instead of the glow of a campfire, we seem to be hovering around the glow of the television screen. There's something sad and glorious about that. I'll talk about that another time. As always, stay tuned.

The long-running ABC series Boy Meets World has its series finale Friday, May 5, in an hour-long special that promises schmaltzy good-byes and long last looks. Also airing will be the season finale of Sabrina the Teenage Witch. Check listings for air times.

Sports Night returns to ABC for its last two episodes of the season. The continuation of the series on ABC is unknown, and its future on the air may rely on the ability to "shop" the show to other networks. Cable nets HBO and TNT are reportedly interested. Whoever picks up the series, let's hope they expand the show to an hour, instead of stuffing it into the half-hour sit-com format that feels like a tight fit for the series. The timing and the smart banter separate it from the typical sitcom, a credit to the show's writer/creator, Aaron Sorkin, the same writer/creator of the fine West Wing on NBC. The final episodes of Sports Night air May 9 and 16. Check local listings for air times.