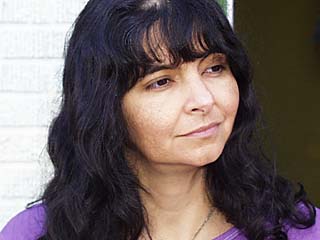 "Loaves and Fishes" screenwriter (and star) Amparo Garcia Crow "is not afraid to tell it like it is when greed, jealousy, or lust get the better of our human instincts," says the short film's director, Nancy Schiesari.

Loaves and Fishes: On the Fringes

"Loaves and Fishes" is a film about people engulfed by the ruins of their broken lives. Garcia Crow's Maria Elena is a pregnant mother of two whose husband has left her, forcing her to live under the thumb of her father's imperious new wife Socorro (Martinez). Garza plays one of the hotel's last tenants, Ignacio, an undocumented worker whose wife and children were killed in Chiapas. He seeks work at the day labor camp, offering sweat and muscle mortar for the boom-town houses that he'll never set foot in. Maria Elena and Ignacio innocently become friends until Socorro intervenes.

"Amparo is not afraid to tell it like it is when greed, jealousy, or lust get the better of our human instincts," Schiesari says of Garcia Crow's script. "That is what attracted me to the story. Most of my work in the past focused on the external reasons for people's oppression: class, religious conflict, racism, and women's oppression. Amparo is interested in those themes, too, but handles it through the poetic."

Schiesari's past work is mainly in documentary filmmaking. She was the U.S. cinematographer for the 1999 Academy Award-nominated documentary Regret to Inform. A faculty member of UT's Radio-Television-Film department, she was introduced to the script while taking an acting class taught by Garcia Crow (a faculty member in UT's Department of Theatre & Dance).

"I was so excited about the story," she remembers. "I proposed a production class in the RTF department, inviting students to read the script and sign up for production positions." Industry professionals like photographer Ian Ellis, designer John Frick, and editors Sandra Adair and Kip Wood gave student workshops on their craft in conjunction with their work on the film.

"The remarkable thing is that we all rose to the challenge of making a good film in a very short amount of time because the old San José Motel was coming down. We all had to think on our feet."

Whatever the harried background was behind the scenes, it is not evident in "Loaves and Fishes," which offers a bittersweet glimpse into the lives of those not featured front-and-center in the glossy images of Austin's boomtown skyline.