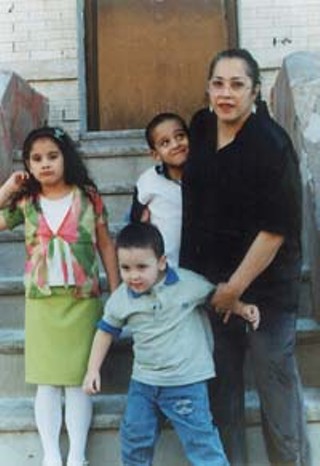 Nuyorican Dream follows one family's struggles and aspirations toward the so-called American Dream.

Riding high on critical praise at this year's Sundance Film Festival, Laurie Collyer comes to Austin for the regional premiere of her documentary, which depicts one family's struggles and aspirations toward the so-called American Dream. Nuyorican Dream takes an unflinching look at Robert Torres (who co-conceived the project) and his family. The eldest son of five children born to a poor Puerto Rican mother from Brooklyn, Torres is the one who "got out." Graduating from high school and college, taking on a career as an educator in an alternative school, and living on his own in Manhattan, Torres provides an emotional and physical lifeline from his family's impoverished conditions to the larger world. It is a role that is spiritually taxing, particularly since Torres sees that the "American Dream" has eluded his siblings, who battle substance abuse, the prison system, poverty, and the intangible social pressures that make "pulling oneself up by the bootstraps" difficult -- if not impossible.

Filmed over a five-year period, the bulk of Nuyorican Dream's footage is from 1997-99. The film reveals a surprisingly honest and sometimes shocking portrait of Torres' family, particularly when unflattering images of his drug-addicted siblings are captured or when cramped living quarters exacerbate flared tempers.

"We did this for a higher purpose," Collyer says in a phone interview from her home in New York. Collyer and Torres "spoke with the family about the higher purpose ... to show that there are people behind the statistics," she explains. "I would like the film to bring attention to alternatives to incarceration and drug treatment programs, and the shortfalls of the Medicaid program."

Though painful issues and circumstances are revealed, what buoys the film is the profoundly deep sense of love and hope that survives. In a key scene at the end of Nuyorican Dream, Torres' young nieces and nephews are playing in a trash-laden patch of grass behind their grandmother's apartment building. Performing what appears to be a childlike ritual, the off-camera Collyer asks Torres' precocious niece Ieysha what the children are up to.

Ieysha: We are trying to get God back, thank you.

Collyer: So why are you trying to get God back?

Ieysha: Because God, he deserves us. He deserves to come back.

According to Collyer, Ieysha "has been channeling the message of this movie since she was two years old."

Nuyorican Dream will screen Tue, Apr 25, 9:45pm and Fri, Apr 28, 7pm, at the Alamo Drafthouse, 409 Colorado. Director Laurie Collyer (along with Robert Torres) will be in attendance.