John Comerford and Tommy Rosen on Around the Fire 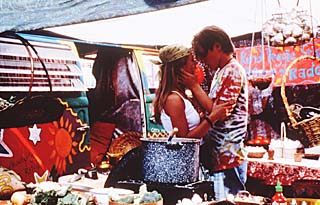 John Comerford and Tommy Rosen sit around a table with four of their friends and joke about how they've seen more than 1,000 concerts between them. That's how enthusiastic they feel about following the music they love. The same fanaticism carried over when the two longtime buddies decided to draw on their own experiences and write Around the Fire, their free-spirited paean to life on the road directed by John Jacobsen. To truly appreciate what it means for these two friends to be working together, consider the unlikely story of how they found each other in the first place. "We actually lived in the same apartment building when we were kids, unbeknownst to us," Comerford says. "So we were sharing elevator rides as infants. We met at the University of Colorado 15 years later, but we didn't piece it together until I went to visit Tommy [at home] for the first time. I was walking up to the building, and I was like, 'No way. Unbelievable!' because literally it's like a one-in-a million shot."

The coincidences don't stop there for the pair, who found they shared the same recreational pursuits, a mutual attraction to mind-altering substances, and, most important, a common taste in music. In fact, their lives and interests overlapped so closely, the odds actually seem better that they would have known each other all along. As it turns out, while still in boarding school, Comerford and Rosen both attended their first Grateful Dead concert the same night in 1983, though the two wouldn't meet until college.

In Around the Fire Comerford and Rosen recapture their glory days without leaving the present tense. The story achieves its timelessness by plunging into the scene without revealing which band it is that draws preppy boarding-school senior Simon (Devon Sawa) into its alluring circle. Of course, he meets others like him (played with warm allure by Tara Reid, Colman Domingo, and Eric Mabius) who embrace him into their community.

"It was so antithetical to the nine-to-five-type existence," Rosen remembers of his own experience. "Not only do you not have a job, but literally your biggest concern is how to get into the next concert, how to get to the next concert, how to feed yourself, and it was just a total adventure all the time. In a sense, all of us had sort of left the families that we grew up with and rediscovered family with each other, and we wanted to express the pain and also the joy of that. It was like running away to the circus." Rosen laughs. "We grew up in New York City, so we really needed a circus to run away to." 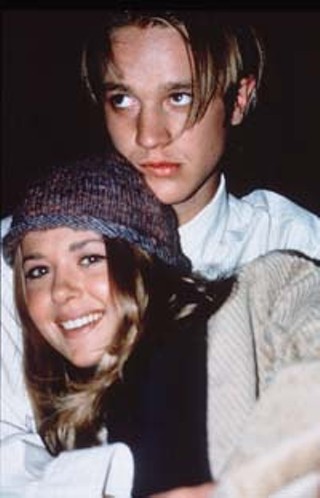 In a film about the way a music experience transforms the lives of its characters, the soundtrack naturally plays an integral part. Crafted with the accompanying music in mind, Around the Fire features a mix of everything from Phish to Bob Marley and the Wailers, the Grateful Dead to the writers' personal favorites, like Vinyl and Blew Willie. When they screened the film for the folks at the Grateful Dead production office, the audience was so impressed that they let Comerford and Rosen select any previously unreleased live version of a Dead song for the soundtrack.

"The music is definitely one of the stars of our movie," Rosen says. "For us, the lyrics of the music we listened to growing up really were the text of our lives. They really were the academic texts we learned from most. And I think there's a group of people out there who identify with that. We used to pore over Grateful Dead lyrics like they were the Bible or some Dead Sea Scrolls that we'd stumbled upon, and it truly had that kind of meaning for us. All of that stuff spoke to our lives, so in the movie we really wanted it to be wall-to-wall music."

Wall-to-wall music and floor-to-ceiling drugs, you might say. Around the Fire is not about drug use (or abuse, for that matter), though the writing duo agree that acknowledging drugs is an essential aspect of reflecting life on tour. The film begins with Simon in rehab, having gone too far with his experimentation and battling a number of other personal demons.

"We really try to be very fair about the issue of drug use and not really end up on either side of it," Comerford explains. "I think it's clear from the film that the difficulty that the lead character Simon is having is a result of his overindulgence, but more importantly, as a result of unresolved things in his past relationships with his family. And both Tommy and I can relate to that on every level. It's a very personal and complicated issue, that of drug abuse, and it's played a role in watching some of our friends trying to go through tremendous struggles in order to come to terms with their own problems. I think our film addresses that, and for Tommy and I the journey keeps going, keeps unfolding. We both have had relationships to chemicals, and those struggles played a role in our understanding of the world."

The film projects an honesty about such issues that acknowledges the appeal of drug use as well as the ultimate consequences of carelessness. "Simon also experiences an enlightenment, partially because of entering that world," Rosen agrees. "Though it led him to a place that was ultimately painful, it was also part of his change, part of his growing up. What can I say? We're not of the 'Just say no' camp because we don't believe in that at all -- that's just ridiculous -- but we're not advocating drug use either. There are some serious risks that you have to consider. It's personal."

Ultimately, everything about Around the Fire reflects the very personal experiences of its lead character and its creators. Yet the film makes itself accessible, because it's easy to connect to a well-crafted and entertaining story -- whether the hip headtrip offers a colorful introduction to or a welcome reunion with the psychedelic music scene.