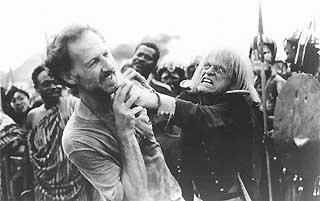 Amongst friends, it may be possible to drop the "r" and still remain the best of fiends. Director Werner Herzog demonstrates something of this capacity with his new film, My Best Fiend, opening this Friday at the Dobie, which explores his colorful relationship with the actor Klaus Kinski. Herzog's movie is a personal documentary that lays bare the two men's loving but stormy friendship, examining the connections and trust at the base of their relationship and the divisions and volatility that connected them over the years. Kinski's notoriety for his on- and off-set explosions was equal to the ferocity of his screen presence. Many thought of him as a mad genius; others thought of him as merely mad. The stories are legion. Toward the crew he would adopt a take-no-prisoners approach; toward his directors he behaved as a savage on the loose. Between Herzog and Kinski, however, there was always some kind of symbiotic struggle. Together they made five feature films, all of which are regarded as among Herzog's best work: Aguirre: The Wrath of God (1972), Nosferatu (1978), Woyzeck (1978), Fitzcarraldo (1981), and Cobra Verde (1987). Kinski died in 1991.

Long ago, coincidence brought the two future film artists together when Herzog was a 13-year-old schoolboy and Kinski a struggling young actor in Munich. "We ended up in the same boarding house," explains Herzog. "He was picked up from the streets by the landlady and given a tiny little chamber for free, and meals and laundry, too. He had small engagements in the theatres, lived in an attic, and stylized himself as an impoverished poet or an impoverished artist." Even then, Kinski's mercurial temperament was evident. Herzog recalls that "he would terrorize everyone from the very first minute. I was the only one who was not terrified. I was just amazed. I looked at him like you look at a tornado."

This unrestrained force of nature, with his piercing gaze, was thus a known entity to Herzog before he and Kinski ever made a film together. Herzog chose the actor to be a central part of the ongoing canvas onto which the director creates his unique landscapes of the soul. In My Best Fiend, Herzog dissects that relationship, speaking candidly of the actor's sublime yet self-absorbed tendencies. Always there was Kinski's strong self-stylization, whether wielding it in the face of the perceived tyrants of moviemaking, the captive residents of the boarding house, or the susceptible readers of his lurid autobiography, I'm So Wild About Your Strawberry Mouth.

"Oh, that's all made up," says Herzog of Kinski's vitriolic descriptions of the director in his autobiography. "I even helped him with that. The worst expressions possible ... with a dictionary! There's a sequence in My Best Fiend about that. I would volunteer and come with a dictionary, and we would pick even more vile and base and foul expressions. He was thoroughly convinced that the book wouldn't sell if he wrote nice things about everyone. That's all right. It's just that everyone out there believes it."

Eight years after Kinski's death, Herzog was finally able to record this tribute. "Right after Klaus' death I couldn't have made the film," he explains. But the distance has created the right moment because now the film is "warm-hearted and has a lot of humor." And what of the propriety of speaking of the dead? "I am convinced he would like this film," Herzog contends. "I think everyone who has seen the film so far would agree. I think it will be an homage to Kinski even though it says hard things about him as well. Ultimately, it's a great tribute to him as well."

My Best Fiend appears for a five-day run at the Dobie Theatre, March 19-23. The first authorized stage adaptation of Werner Herzog's Stroszek, produced by Theaterless Theatre Corps, is playing at Hyde Park Theatre through March 18.