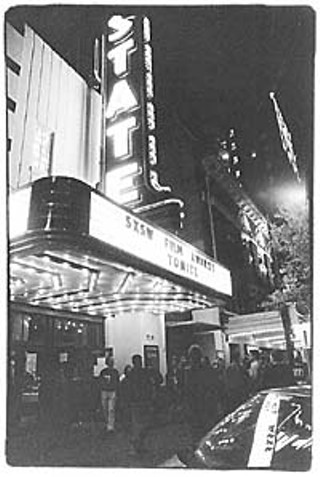 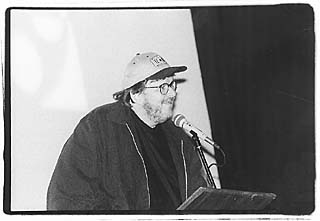 Michael Moore donated $5,000 to each of the runners-up in the Best Documentary Feature category. (Photo By John Anderson)

"Think of this as a work in progress," said Louis Black, the avuncular yet curmudgeonly Chronicle editor and SXSW co-director, emceeing the seventh annual SXSW Film Awards Tuesday night at the historic State Theatre. Capping off a four-day conference and trade show (the film festival continues through Saturday), the event honored the achievements of a host of independent filmmakers. Paying tribute to documentary filmmaker extraordinaire D.A. Pennebaker was an inspired choice for SXSW, since his spectacular achievements have regularly included films about musicians and the music scene. His credits, which include Monterey Pop, Don't Look Back, and Searching for Jimi Hendrix, record Pennebaker's singular and visionary treatment of his subjects. Introducing Pennebaker was songwriter, performer, agent provocateur, and rock & roll gadabout Bob Neuwirth. Neuwirth's association with Pennebaker dates back to 1965 in Berkeley when he assisted Pennebaker during the making of Don't Look Back, a documentary following a very young Bob Dylan on tour through Europe. As Neuwirth explains, Pennebaker doesn't make films, he makes movies -- that project "poetry and light on the silver screen." When Pennebaker took the stage, he graciously accepted his tribute with a speech crediting his wife and partner in film for over 20 years, Chris Hegedus. Filmmaker Michael Moore (Roger & Me), who happened to be in town following our beloved governor George W. Bush on behalf of ABC's Politically Incorrect, made an appearance as a presenter. Perhaps the most entertaining of the speakers, he regaled the crowd with stories. He recounted an incident in which he cornered George W., who told Moore, "Behave yourself and go get a real job" -- to which Moore's response was, "You mean like the job your daddy got you?" Moore went on to rag on the Texas Union for shutting down their film presentations because they weren't making a profit. Eventually, he got around to giving out the award for Documentary Feature (to Christopher Wilcha for The Target Shoots First), but after discovering that the category's runners-up wouldn't receive a cash award, he donated two prizes of $5,000 each to the filmmakers -- Aiyana Elliott for The Ballad of Ramblin' Jack and James Ronald Whitney for Just, Melvin. Having Pennebaker and Moore on the same stage was an illustration of extremes, and, if nothing else, an inspiration to any wannabe filmmakers that you can make a movie about anything you want to.

A second tribute was paid to filmmaker Monte Hellman. Black returned to the stage to reminisce about the days before video rentals, when the only way you could get to see certain films was to sponsor a film series. Later, he explained, you could set up a projector at home and run the movie as often as you'd like. He watched Hellman's 1974 feature Cockfighter for three days, he said. The tribute to Hellman was accepted by actress Patricia Pearcy, who starred in Cockfighter. Paying a touching homage to Hellman, Pearcy said, "He is one of the unsung heroes of his generation, and it is time that we sing his praises."

The Academy Awards it was not, but if it had been the Academy Awards, we would not have had the glimpse at the future the participating filmmakers gave us. The SXSW Film Awards ceremony is one of very few venues in the world in which many of the makers of these films have the opportunity to achieve the public recognition for their films and meet their audience. "The heart of the event is film," as Black said, and SXSW is "about the spirit and intelligence in independent filmmaking." And while there weren't a lot of big gowns and limousines present, it was an awards show that wasn't about the "best" anything, but about recognizing distinguished achievement in independent film. And it did.