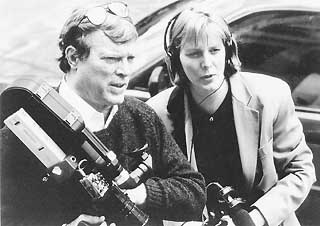 There are precious few living filmmakers today as influential as documentarian D.A. Pennebaker. Best known for his enormously influential film Don't Look Back, which followed a young folk singer by the name of Bob Dylan on his 1965 British tour, Pennebaker has also chronicled Jimi Hendrix and Janis Joplin in Monterey Pop, and (with his wife and partner Chris Hegedus) Bill Clinton's 1992 bid for the presidency in The War Room (which was nominated for an Academy Award). In 1997, Pennebaker and Hegedus filmed Moon Over Broadway, a document of the behind-the-scenes machinations involved in the creation of the Broadway play starring comedienne Carol Burnett. Their new film is Searching for Jimi Hendrix, a tribute to the guitar master that mixes old performance footage of the musicians with interviews with such diverse contemporary artists as Los Lobos, Laurie Anderson, Charlie Musslewhite, Roseanne Cash, and Chuck D.

Throughout his body of work, Pennebaker has pioneered the so-called "fly-on-the-wall" style of documentary filmmaking, allowing his subjects to speak for themselves without benefit of voiceover narration or other cinematic scaffolding, making him literally one of the most imitated and praised filmmakers working today. In the Sixties, along with Richard Leacock, Pennebaker created one of the first truly portable film cameras, which helps free filmmakers from the captivity of the studio and permits them to follow their subjects wherever they might lead. Pennebaker's work has usually gravitated toward musicians and politicians -- show people all. Other subjects include Robert Kennedy's showdown with George Wallace in Crisis, the Nixon/Kennedy debates in Primary, David Bowie's last appearance as Ziggy Stardust, and Depeche Mode.

In anticipation of the SXSW Film Festival Pennebaker Retrospective, we spoke last week with Pennebaker and Hegedus from their home in New York and combined the quotes below with some comments from an interview we conducted two years ago. That interview can be found here.

[How the idea of the oft-imitated "Subterranean Homesick Blues" sequence with the throwaway title cards came about:] "That was Bob's idea. We were talking in a bar and he said, 'Do you think this is a good idea for something to do in the film?' and as he described it he would have these cards and the cards would have things written on them and he would hold them up. What he'd do with them after he'd finished -- whether he'd throw them away or whatever -- we didn't even talk about. I said, 'That's a great idea, let's bring a lot of cards with us,' which we did."

[Regarding the numerous recent homages:] "I don't know how I feel about it. They're not sending me checks, so whatever copyright I had on it doesn't seem to be providing much protection. That's the thing about documentaries, though. The very things that copyrights are thought to protect you against aren't covered. I mean, if that was a scripted film and somebody did it, they'd be all over you like a tent. I don't know. I don't feel particularly litigious, so I don't feel like grabbing a lawyer and going after the various people who have done this, but I'm a little bemused."

"I think what these politicians and performers really like is the idea of whatever it is they are doing being put into historical form. It's just that it doesn't happen very often. The six o'clock news isn't really very interested in you beyond about a minute-and-a-half worth of news. So the idea of somebody spending many, many weeks and months of their life filming you, and really watching you ... that's not an uninteresting idea to interesting people. And once you've kind of set a mode of what you're doing and the response to it, I think they're happy to live their life for you. I think they have to sense that it's partly their film -- when they see it, it's got to be revealing so that they can see themselves in a way they never could in normal life, just through other people. They're going to actually be witness to themselves in a real-life situation. I think that's very interesting to some people.

"I doubt there would be very many people who could see themselves in an unflattering or mean light. Nobody sees themselves as a villain no matter what you show them doing. I think they're kind of protected against those problems. The one thing you might run into, although we really hardly ever have, is they might be embarrassed by something, and if you showed it on a screen it would be like catching them in Las Vegas with the wrong woman or something. That might cause them to want to change their mind about making the film. But I think that when you're really locked into a relationship with a person making a film, then I think it would never occur to you to do that. I mean, you're not trying to trash them. They trust you. So I think, in general, they're friends during the filming. I doubt that we would be able to make a very good film about somebody we didn't like much."

"I especially wanted to show this one in Austin because I knew that Austin was a good theatre town. Moon Over Broadway is such a marvelous film because we got incredible access to everyone connected to it: the writers, the actors, the producers. I think that everybody afterwards had second thoughts about having let us in. In fact, we're doing a DVD now in which we have them all sit down and get it off their chest, their reflections after three years. People don't hesitate to tell you how pissed off they were. In most situations, people would be very polite and never say anything disparaging. We're just in the middle of doing the DVD right now. Seeing this film with a large audience of people who know something about theatre is fascinating because it's kind of the fundamentals of the theatrical life right there on the big screen."

"Musicians are interesting to me because they're different from normal people and yet they are expected to have the same reactions, and so there's a constant struggle going on there. They want to perform for people, but at the same time they want to get theirs, and the two don't often go together. I think that they lend themselves to performance, and as a filmmaker that's something you look for. You realize that people who make films like we do don't have a lot of options, you know? We don't write our scripts, we don't have movie stars at our beck and call, we have to go with things which are kind of indigenous to normal life, like aspiring politicians, performances by musicians, maybe dancers.

"You can always make a film about your barber or maybe your aunt, but you're going to have a pretty hard time getting a theatre to run that. If people don't think that your work has some bearing on their lives, there's not much reason for them to go and see it."