A Report From the Sundance Film Festival 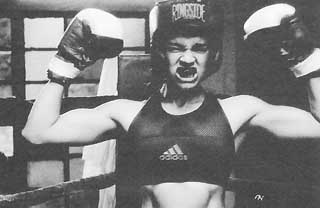 What's wrong with this picture? Tammy Faye Bakker Messner (she of PTL Club Christian broadcasting fame) and RuPaul (he of drag diva notoriety, who adopts the respectability of the surname Charles as the narrator of the documentary The Eyes of Tammy Faye) strolling around the Sundance Film Festival arm in arm. To pervert a phrase: Independent films can make strange bedfellows. Here in Park City, Utah, at the country's most prominent and significant annual festival of independent filmmaking, this unlikely duo befits the "anything can happen" atmosphere that permeates the event. Maybe it's the giddiness caused by the 7,000-foot-high, nosebleed-in-the-mountains air or maybe it's the fever caused by the press of 20,000 or so extra people crammed into this tiny resort town (which is gearing up to host the 2002 Winter Olympics), all hoping to discover/promote/celebrate the "next big thing." Whatever it is, the sensation is palpable. And there's a place in the mix for all the mascara queens, filmmakers, publicists, journalists, buyers and sellers, party animals, pimps and sell-outs, stars and starlets, insiders and hangers-on, and film worshippers and cynics. It's an event like no other; it's the Sundance Film Festival 2000. Always there's the anguish and delirium that accompany any festival: the pleasure of planning out your day any way you like, and the nagging doubt that perhaps you should have planned the day differently. There's always too much to do, and it's happening at the same time. Movies to see, deadlines to keep, parties to crash. Everyone walks with their ear to the ground, hoping to catch wind of any tips, buzz, or leads on what this year's "Cinderella" movie might be. Last year's was a whopper: The Blair Witch Project, a micro-budgeted movie that intelligently made the most of the means at its disposal and was bought for $1 million after its first midnight screening. By the end of 1999, the movie had grossed more than $140 million (still counting), making it the most profitable independent movie of all time. Success on such a grand scale attracts even more players, although most realize that the Blair Witch model is the exception rather than the rule.

The Eyes of Tammy Faye

In fact, this year's festival had very little of the bidding wars that have made other years so notorious. Numerous movies were acquired, although the amounts paid were less spectacular than in years past. Another way of saying this, perhaps, is that the amounts paid were more realistic. Miramax's over-$10-million purchase of last year's Happy, Texas, a movie that went on to gross around $2 million, was a cautionary model also fresh in everyone's minds. Many postulated that the festival absence of acquisitive Miramax honcho Harvey Weinstein, due to health problems, was also a factor in this year's low-key bidding process.

Also prompting much conversation was something called the dot-comming of Sundance. Everywhere, you could see the presence of Internet enterprises, both start-ups and relative old-timers. Many companies found the festival frenzy fertile soil for a new launch, while others sought to expand the means by which the festival could be viewed. Short films were in high demand, and many were bought by Webcasters eager for new content. If "digital" was the buzz word at last year's festival (evidenced by this year's added capacity for digital projection), then this year's word was "dot-comming." The effect this had on the overall experience of Sundance may be less significant than the effect it had on all the other "dances" in town.

The last several years have seen an expansion in the number of smaller spin-off festivals that provide filmmakers with venue space in which to present their films and capitalize on the infrastructure provided by Sundance. Slamdance is the granddaddy of the bunch, and by now this renegade festival has become almost an institution in itself. Ironically, the number of films it refuses is even greater than those refused by Sundance, due to its limited screening space and slots. Still, it bills itself as a festival "by filmmakers and for filmmakers" and does a good job of living up to those ideals by nurturing the films it selects with offers of experiential and hard-won DIY wisdom. Several Austin-made movies were screened at these various dances. Bob Ray's "homegrown" feature Rock Opera screened at No Dance, Jeff Stolhand's romantic comedy What I Like About You premiered at Slamdance, and Sidney Brammer's digital short Borderland previewed at Digidance.

Paul Stekler, Austin-based documentary filmmaker and production head of the University of Texas RTF Department, and co-director Daniel McCabe had their new film George Wallace: Settin' the Woods on Fire selected to premiere in Sundance's documentary competition. They use this study of the politician's career as a means of examining American political realities. At two hours and 40 minutes in running length, the film can truly be called a "study" of the life of this famous segregationist, who, in his later years, claimed to change his beliefs. I'd hazard a guess that Wallace could have won an award for the longest film at Sundance, although the filmmakers are no doubt much more excited by the award they actually did receive: a special jury prize for documentary writing.

In the narrative division two films tied for top prize: Kenneth Lonergan's You Can Count on Me and Karyn Kusama's Girlfight. Lonergan, the writer of Analyze This, shifts from comedy to drama in this work about the close but estranged relationship between a brother and sister, played by Laura Linney and Marc Ruffalo and co-starring Matthew Broderick. Girlfight was one of the hottest tickets in town. Its story about a high-school senior who takes up boxing to vent her frustrations is an iconographic girl-power story. It stars Michelle Rodriguez, who, with no prior acting experience, tears through the screen, mesmerizing audiences with her fiercely defiant gaze.

It might be said that the 2000 Sundance Film Festival was the year Title IX came home to roost. In addition to Girlfight, another movie called Love and Basketball grabbed a lot of attention. Due to be released in April by New Line Cinema and co-produced by Spike Lee, the movie follows the basketball careers and romance between a boy and a girl who live next door to each other in Los Angeles. A sweet and realistic movie, Gina Price-Bythewood's Love and Basketball may finally grant Spike the kind of screen hoops success he's always craved.

As women figured more prominently this year as feature directors at Sundance, curiously their numbers dwindled to zero at Slamdance. It generates wonder about the meaningfulness of such things, whether our eagerness to spot trends can create commonalities that are actually nothing more than coincidences or whether coincidences are in the eye of the beholder. One person can only take in a fraction of the festival, so the identification of trends can only be a gross generalization at best. However, one general observation was frequently heard: The collection of films, on the whole, were better than they had been in years past. Check back in 2001 after many of these films have had a chance to spread beyond Utah and decide for yourself.