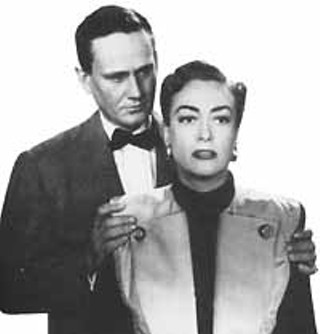 D: Dorothy Arzner (1935); with Rosalind Russell, John Boles, Billie Burke, Jane Darwell, Thomas Mitchell, Dorothy Wilson. Rosalind Russell acting. Imagine. The very woman for whom the word "madcap" was coined, the woman whose giddy portrayals of fast-talking, double-dealing dames with machine-gun delivery -- acting! Well, she could act, she just didn't get the chance very much, once she'd been typecast as the motor-mouthed madonna. And in this movie, she acts her little heart out in playwright George Kelly's (mysteriously) Pulitzer Prize-winning story of an overbearing, scheming matron who is a little too involved with her possessions. Mr. Kelly, uncle of Princess Grace and by all accounts a big queen, has written one of the all-time great female roles, one that any actress would give her eyeteeth to play. Along with a host of meaty supporting roles, Kelly's sculpting of the role of Harriet Craig is masterful, though at times it does seem a bit dated (IMDb.com lists another version of Craig's Wife, a silent 1928 film, presumed lost, that would be a treat to see). The sensitive and well-thought-out, yet cold and detached, qualities in the movie are a gift from pioneering director and avowed lesbian Dorothy Arzner, who also directed Dance, Girl, Dance and Christopher Strong. Harriet, to whom appearances are everything, rules her adoring husband and their house with a velvet fist. When a well-meaning neighbor brings over fresh flowers as a gift, Harriet immediately disposes of them, saying, "I can't go around picking up rose petals all day." But her wealth, through marriage, has brought her (bought her?) all the things most important in life -- a beautiful home and social respect, and she's determined to remain in control of that as long as possible. But all good things must come to an end. After Harriet has isolated her husband, alienated their friends, and lost all her servants, she gets caught up in some ridiculous plot contrivance (that Joan Crawford completely does away with in her version of Harriet Craig) that serves to bring all her manipulations and machinations to light. Predictably, her husband leaves her, and we see her crack, realizing she's lost everything and that the thing that ostensibly means the most to her -- the house -- is cold consolation. But the last scene, in which her sanity dissolves before our eyes, is a glorious and delirious spectrum of emotions in which we see all her defenses and fantasies crumbling before her, as she just as quickly installs new ones. Craig's Wife is an overlooked tour-de-force and jewels in the crowns of Rosalind Russell and Dorothy Arzner.

D: Vincent Sherman (1950); with Joan Crawford, Wendell Corey, Ellen Corby. Joan, with director Sherman, trimmed all the fat away from Craig's Wife (that means removing every scene in which Joan would not be present) and turned it into a tour-de-force for La Crawford. As the epitome of every neurotic, deeply disturbed female that Joan ever portrayed, Harriet Craig is Joan with a capital J. Taking the role in her mouth and shaking it into submission, she is playing, ultimately, another facet of Joan herself. But what Joan film role didn't become Joan herself -- either before or after filming? In a case of Joan's art imitating her life, as well as her life imitating her art, Harriet provides Joan with yet one more of those peculiar roles -- roles which must have been written with only Joan in mind, since it would be difficult to imagine any other actress in this role. If Craig's Wife had focused this much attention on Rosalind Russell, it's hard to imagine the actress could have sustained it, since part of Russell's strength was her ability to respond to other characters while seemingly on a course all her own. But Joan, never one to shy away from any movie role, makes Harriet Craig one of the great milestones of her career. And we are indebted to her for it. As she explains to her niece (she always has nieces in movies like this -- sweet young things who come to live with her and become her indentured servants) about how to "keep men in line," we are given more pure-Joan philosophy. With lines like, "The average woman does put her life in someone else's hands -- her husband's. That's why she usually comes to grief," and "No man is born ready for marriage -- he has to be trained," it is familiar Joan territory. Familiar now, because we've seen Joan spackling her angst all over movie and TV screens for decades, but along with Mildred Pierce, Queen Bee, and Torch Song, Harriet Craig, at the time, was a new dimension in Joan's personal psychosis committed to film.

D: William Wyler (1941); with Bette Davis, Herbert Marshall, Dan Duryea, Patricia Collinge, Teresa Wright. Bette, Bette, Bette, cold as ice and hard as nails in this Lillian Hellman story of the despicable Regina, grand matriarch of the oily Giddens clan. Set at the turn of the last century in the Old South of happy darkies and their benevolent white masters, an image redolent with the putrid smell of decaying fiction, Regina and her white-trash relatives try to lure an investor into building a cotton mill near their land. With the Giddens family able to reap enormous rewards from such an arrangement, the greed becomes rampant as Regina and her two brothers scramble to try and raise their portion of the money. Hellman's story, with additional dialogue from Dorothy Parker and Alan Campbell, becomes incendiary when Regina's ailing husband Horace (played by Mr. Gloria Swanson, Herbert Marshall) refuses to ante up the third required for his and Regina's portion. As she rails at him to put up the money, her brothers are scheming to come up with the additional money themselves and cut Regina out of the deal. Regina's nephew, Leo, played to annoying perfection by Duryea, works at the bank where Horace keeps his safety deposit box, and a plan is engineered to "borrow" $75,000 in railroad bonds that Horace keeps there ("He won't miss them. Besides, people ought to help other people"). The formidable Bette, as Regina, looking stylish and intimidating in her Orry-Kelly wardrobe, is masterfully lit, and the camerawork is expert. During her tirade, Horace suffers a heart attack, and this piece of business is one of the most magnificently planned shots in all of movie history, with the camera trained on Regina's harshly lit face, and all we see is the staggering and collapsing shadow of her stricken husband in the background. Though he rallies only slightly, Horace discovers the bonds are missing, and his ill health makes his death imminent, he extracts his revenge on Regina, telling her that he will claim the bonds were a loan, and not stolen, thereby removing Regina's leverage against her brothers and losing any possibility of profiting from the sordid arrangement. But there are ugly twists ahead until Regina triumphs. Ideally, this will bring solace to her, as she loses everything else -- her husband is dead, her daughter has abandoned her, and she is, figuratively speaking, left being the biggest shark in a pool infested with them. Dazzling and chilling, The Little Foxes is a monument of storytelling, filmmaking and acting.