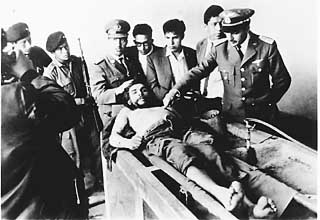 Swiss documentary maker Richard Dindo has been called the "memory composer"; his films, "political cinema." He considers himself a "portraitist or biographer of those who are no longer with us." Judging by the two films he's bringing to the Alamo Drafthouse on Wednesday, January 26, as part of the Texas Documentary Tour ... Ernesto "Che" Guevara: The Bolivian Diary (1994) and Genet at Chatila (1999) ... all of the above are correct. In both films, Dindo takes his protagonists' first-person writings ... the diary of Bolivian guerilla revolutionary Guevara and the Palestinian texts of French writer Jean Genet ... and renders them on film, reconstructing their actual experiences. Says Dindo, "Memory is the motor of my films." Serious stuff, this. In Genet at Chatila, we are walked through Genet's Palestinian experience during the two years he spent in the early Seventies hanging with exiled Fedayeen outside of Jordan. Genet's memory of these years is triggered when he visits Beirut in 1982 just after the Lebanese massacre of hundreds of Palestinians at the Chatila and Sabra refugee camps. A few months later, still in shock over what he saw in Beirut and dying of throat cancer, Genet is moved to write what would be his last book, Prisoner of Love, about the Palestinian revolution. In the film, a young French woman of Algerian descent tucks a copy of Genet's Prisoner of Love under her arm and sets out to retrace Genet's path, starting in Beirut and flashing back to Amman and environs in the Seventies ... to the accompaniment of Mozart's Requiem, because that's what Genet listened to as he wrote his book. The voice-over is an actor reading from Genet's ponderous text ... "what is the stuff of the dreams of a revolutionary who revolts in the desert?" ... there are re-enactments of certain of Genet's pivotal experiences and interviews with those who remembered interacting with him when he was there. The tone is somber, heavy-hearted, tragic; the Mozart Requiem says it all. Very serious stuff.

The Guevara piece feels more like a documentary. There's archival footage of Guevara's early liaison in Cuba with Fidel Castro, his later clash with the Russkies, and subsequent striking out on his own to make things happen -- his way -- in South America. Following Guevara's daily journal, the film painstakingly reconstructs the endgame of guerrilla warfare that Che and his hopelessly outnumbered followers staged in Bolivia before he was captured and executed with a little help from the CIA.

There's the voice-over reading from his journal, the travel footage, retracing Che's path through the countryside, interviews with peasants who remembered him, including one woman who met the revolutionary as a child, fed him his last meal, and ran out to see his body after hearing the shot that killed him. Interspersed is commentary which keeps us current on what the other side, the Bolivian dictatorship later joined by the CIA, is doing. Throughout it all, one feels the enormity and futility of the task Guevara had taken on, trying to light a political fire under Bolivia's oppressed, far-flung peasant class. Surprisingly, much of his dwindling energy, in the end, had to be diverted to convincing subsistence farmers that he, and not the dictatorship, was on their side.

Dindo, who works and lives in Paris and Zurich, has been making films since 1970. Here are some questions and answers excerpted from Dindo, the Memory Composer, by Cecilé Küng:

Cecilé Küng: What makes a film better at tracing a person's biography than a book ?

Richard Dindo: The distinctive quality of the documentary is its ability to unite different representational forms ... A documentary allows you to encircle a person, to get closer to him and express the complexity of his truth in a variety of representational forms ... To me, films are more than moving images. The spoken word is as important as the image, sometimes even more so. I usually take the spoken word as my point of departure. And because I deal with memory, the events in question have already taken place. Once I'm on location I'm always confronted with reality in which nothing more is happening. I have to re-create and reconstruct events so that I can film them. That actually puts me in the territory of fiction, almost like a feature film author. ...

I also think that film is better suited to recollective work because images are easier to remember than words. In my films, I try to combine the principle of biography and the principle of remembering. Jean Cocteau once said -- a statement often quoted by Godard -- that film shows death at work.

CK: Have you ever been tempted to make films about current events?

RD: I work with memories. I don't try to immortalize the present, I try to draw memories into the present. Again and again, my films focus on people who are already dead, who are no longer with us. My films revolve around absence. That's my subject ... Actually, I'm interested only in autobiographies, correspondence, diaries ... stories that are poetic but true, stories behind which I can see the people who have genuinely lived them. ...

My work is steeped in cinematic history. I'm one of the few documentary filmmakers who understands the documentary as a narrative. I try to tell stories in Hitchcock's sense, stories that are thrilling and show development, but are at the same time informative and poetic.

CK: Do you edit your films according to any specific formal criteria?

CK: You became a filmmaker at 26. What did you do before that?

RD: Nothing in particular. I had an ordinary education and then worked in an office whenever I needed money to travel abroad. I started going to the cinema very early and started reading world literature very early. I went to Paris because I'd heard you could see films at the Cinematheque Française. Then I married a French woman who supported me for several years. For several years I saw three or four films a day at the Cinematheque. I spent years just going to the cinema and reading hundreds of books. That's the way I educated myself.

Ernesto "Che" Guevara: The Bolivian Diary and Genet in Chatila will be presented as part of the Texas Documentary Tour on Wednesday, January 26, at the Alamo Drafthouse, 409 Colorado. Ernesto "Che" Guevara will be shown at 7pm, and Genet in Chatila will be shown at 9:30pm. Filmmaker Richard Dindo will be in attendance to introduce each film and conduct a Q&A session afterward. Tickets are on sale by phone (322-0145) through Tuesday (10am-2pm). Tickets will go on sale at 6:15pm on the day of the show. Admission prices are $6 per show for the general public; $4 for Austin Film Society and KLRU members and students. The Texas Documentary Tour is a co-presentation of the Austin Film Society, the University of Texas RTF Dept., The Austin Chronicle, KLRU-TV, and SXSW Film.