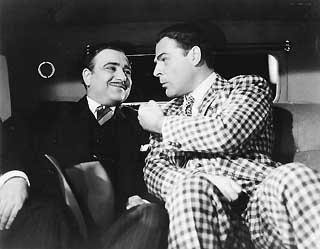 Here's a brief guide to the films being shown in the Austin Film Society series "Unfaithfully Yours: The Satire of Preston Sturges." All showings are on Tuesdays at 7pm in the Texas Union Theater, Guadalupe & 24th, except The Palm Beach Story, which will be presented on Monday, Feb. 7, at 7pm. All showings are free. For more information, call 322-0145.

Sturges' most inspired pairing of leads: Henry Fonda and Barbara Stanwyck. Fonda pushes his nice-guy persona to a ludicrous extreme with the sweet but totally clueless herpetologist Charles Pike, who's charmed by Stanwyck, never more cynical or sultry than as Jean Harrington, hard-edged con artist. She woos him, falls for him, leaves him, and comes back to haunt him in a twisted romantic revenge plot. Her wedding-night confession, reeling off a list of lovers that would've turned Casanova green, is priceless, with one of the most inspired uses of train and tunnel imagery ever put to film.

The Miracle of Morgan's Creek

Sturges biting the hand that feeds him. Hollywood was home to the greatest success Sturges ever knew, yet even he couldn't resist cataloging its inanities and teeing off on all the cinematic artistes who think they're above the fluff of musicals and comedies and want to make "important" films. But comedies are important films, as director Sullivan learns when he forsakes Ants in Your Pants of 1939 for Oh Brother, Where Art Thou? and winds up on a Southern chain gang, convicted of murdering himself! McCrea's choicest performance for Sturges, and a plot with more curves than Veronica Lake.

Sturges on the importance of money, sex, and guns -- not necessarily in that order. Colbert is yet another runaway heroine in a screwball comedy (a role she trademarked), but with Sturges' usual subversive spin, she's running away from the man she loves so she can marry someone for his money. This is Sturges at his pithiest, with his choicest cast of supporting loons: the Weenie King, Rudy Vallee's hilariously understated John D. Hackensacker, the Princess Centimillia, Toto, and -- yipes! -- the Ale and Quail Club. The sequence under the opening credits is one helluva gag, with a shameless payoff in the final shot.

The Homecoming From Hell, or No Good Deed Goes Unpunished. Sturges sends up the military, wartime hero fever, and political horse races in this tale of hay fever victim Woodrow Truesmith, an army reject who buys a few drinks for some penniless Marines and is strong-armed into putting on a uniform and returning home, where he's drafted to run for mayor. It's top-grade Sturges: crisp, sardonic, and paced like the Indy 500, with the genius touch of Woodrow fighting to tell the truth but being stymied by the Marines' lies (!) and the public's lust for a hero. Sturges veteran Demarest is at his peak here, as is Bracken, whose desperation is hysterical.

with Eddie Bracken, Betty Hutton, Brian Donlevy. This is the master of subversion's most subversive work, a wartime romantic comedy built around the single heroine getting drunk and knocked up by a soldier she can't remember. Small-town sweetheart Betty Hutton is just trying to do her bit "for the boys" when she goes out to cut the rug with some soldiers, but the "victory lemonade" gets the better of her, and she comes home with a souvenir of her last dance. Sturges covers himself by saying Hutton's Trudy got married before she did the horizontal bop, but even so, the plot is a radical departure for the time.

, only with sequences about a guy murdering his wife. Sturges' star was dimming by the time he made this perverse farce, but the finished work boasts much of the wit, lunacy, and free-for-all comic verve of the writer-director's best wartime films. Sir Alfred De Carter, a symphony conductor whose mad jealousy dwarfs Othello's, fantasizes three different demises for his wayward wife -- each hilariously scored to a different orchestral work -- then tries to make good on his fantasies, with disastrously comic results. Harrison lets his crisp facade come wonderfully unglued and proves himself marvelously keen at slapstick.