Fast, Cheap, & Out of Control 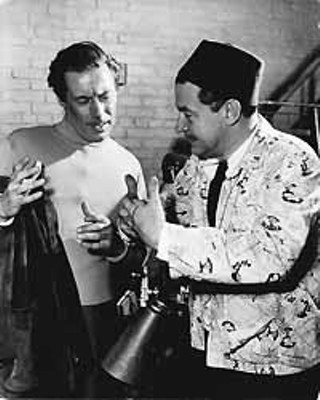 Director Preston Sturges -- who wears a red fez so that the crew can quickly locate the director -- shows Rex Harrison a new technique in thumb-twiddling during the filming of Unfaithfully Yours.

It's called the Ale and Quail Club. Its screen time in Preston Sturges' The Palm Beach Story is relatively brief, but like the other whacked-out creations in Sturges' amazing gallery of oddballs -- the Weenie King, Sgt. Heppelfinger, John D. Hackensacker III, Madame La Jolla, the Boss, to name only a few -- the impression it leaves is indelible, not unlike the image of your father wearing nothing but boxers and knee socks. As the name implies, the club combines those twin American passions, liquor and firearms. Once its half-dozen members (and you may interpret that word however you like) help heroine Claudette Colbert board a train leaving New York, they retire to the club car and proceed to get good and liquored up. When they're thoroughly lubricated, they pull out the guns. Big guns. Shotguns. As two Ale-and-Quailers conduct a skeet-shooting competition in the club car, taking out glassware, shelves, windows, and very nearly the bartender, the rest go tramping up and down the rail cars' narrow passageways, in search of the wild Colbert, with their dogs a-howling and shotguns a-blazing. In short, they blast the holy hell out of that train. Well, what the Ale and Quail Club did to that poor locomotive, Preston Sturges did to World War II-era America.

While the rest of the nation was rallying around the flag, glorifying the good old U.S. of A. as the land of the free, the home of the brave, the cradle of liberty, truth, justice, equality, blah blah blah, screenwriter and director Sturges was spitting out a series of rapid-fire Hollywood comedies that showed untruth, injustice, inequality, corruption, chicanery, and illicit sex running rampant across this land from sea to shining sea. In pictures such as The Great McGinty (1940), The Lady Eve (1941), Hail the Conquering Hero (1944), and The Miracle of Morgan's Creek (1944), votes are bought, marriages are sold, and fictitious acts of wartime heroism are pulled like rabbits out of a hat. There isn't a value cherished by the American public or a personage of stature in our national life that doesn't come under fire from Sturges.

Captains of industry? Bang! If they're not gin-guzzling gunslingers terrorizing the railroads, they're trust-fund ninnies like J.D. Hackensacker, pinching more pennies than a Depression hobo, or sham industrialists like the Weenie King, who brags that he "invented the Texas Weenie," but openly advises those he meets to "lay off 'em, you'll live longer" (The Palm Beach Story).

Civic leaders? Bang! Bang! They're all snugly in the pocket of political bosses who keep the machine of government humming along with the sweet grease of graft (The Great McGinty).

The wholesome girl next door? Ka-pow! One innocent young thing goes off to a dance with some soldiers and comes home in the family way -- and can't even remember with whom she had that last special "dance" (The Miracle of Morgan's Creek). Our fine fighting boys? Atta-tat-tat-tat!! When they're not deflowering the blossoms of American womanhood, they're hawking bogus war relics for booze and telling whopper lies to hoodwink a whole town into believing a poor sap with a medical discharge is a battlefield hero (Hail the Conquering Hero).

Motherhood and apple pie? Ka-ching! Well, actually, apple pie comes out pretty much unscathed, but motherhood gets popped between the eyes courtesy of a Marine whose fixation on Mom makes Norman Bates' look like a healthy interest in maternal affairs (Hail the Conquering Hero).

The immensely popular president of the U.S.? Boom! Even the three-term commander-in-chief gets his when the Princess Centimillia cracks, "Nothing is permanent in this world except Roosevelt, dear" (The Palm Beach Story).

To the generations who didn't live through the Second World War and who have since come to think of American society during that period as a monolith of the upright and squeaky-clean, hoeing their Victory Gardens and itching to knock that hooligan Hitler on his keyster, Sturges' movies are a revelation. They show us the kind of cynicism, greed, deceit, and obsession with sex that we recognize from, well, ourselves today, and we don't expect that dark side of America to be thriving in the midst of "the Good War," much less in a comedy out of Hollywood. Wasn't Hollywood the Dream Factory? Wasn't it the seed bed for Capra-corn, where scoutmasters win over Washington and country rubes defy the Depression, where the bedrock values of honesty and trust always triumph over the deceit and treachery of the Fat Cats?

Sure. And by and large, Hollywood did crank out the kind of entertainment that reinforced the moral status quo. But every now and then the studio system tried to absorb some talent that wasn't content to join its cinematic assembly line and found ways to buck the system. These mavericks managed to make pictures that flew in the face of the usual Tinseltown restrictions. Orson Welles was one. Preston Sturges was another. A successful screenwriter for most of the Thirties (Imitation of Life, The Good Fairy, Diamond Jim, Easy Living), Sturges had his sights set on becoming a director. (After all, he could see who got the respect on the set.) For years, he offered his services to the studios in this regard, to no avail. Then, in 1939, he offered to sell Paramount a script of his The Great McGinty for one dollar if the studio would also let him direct the film. Paramount bit, thinking it a bargain, and Sturges got this outrageous little tale of election fraud and political ambition into America's moviehouses. It earned Sturges not only his first "written and directed by" credit (something never before achieved by a screenwriter), but also critical acclaim, a Best Original Screenplay Oscar in 1941, and ultimately the right to continue making the pictures he wanted, as nonconformist and non-Hollywood as they may have been. Before the war ended in 1945, Sturges had whipped out another seven movies, all but one of them -- the relatively straightforward biopic The Great Moment -- gleefully blasting holes in Uncle Sam's Wartime Express as it dutifully chugged across the home front.

For anyone interested in visiting the shooting gallery of this rip-roaring writer-director, the Austin Film Society is offering a Preston Sturges retrospective, running January 18-February 29. The series of free screenings includes all but one of Sturges' wartime comedies, plus the strongest of his four post-war efforts, the delightfully wicked murder fantasy Unfaithfully Yours. Taken together, these films provide as gleefully contrary a view of Forties America as you're likely to find coming from Hollywood. High society personified by a herpetologist millionaire with all the common sense of an anaconda egg. Small-town political leadership, embodied by a blathering old grafthound as phony as a buffalo-head dime but who keeps getting re-elected anywhoo. Spouses who fantasize about spectacular scenarios for offing their matrimonial partners. Compassionate artists who go off to experience the life of the destitute and forgotten in their luxury trailers with butler in tow. It's like the land of the anti-Capra. The settings and characters used by Sturges are parallel to those in the films of Frank Capra -- the small towns, the little guys, the highfalutin and the hoi polloi -- but where Capra consistently reinforces the idea that people are inherently good and virtue will out, Sturges cynically sells the notion that people by nature are driven by their own self-interests. While the poor schmo without money or power, the one who tries to do the right thing, occasionally gets the girl, it must be understood that that's a freak of nature. A cosmic joke.

Of course, as cosmic jokes go, it's a real thigh-slapper, and with Sturges doing the telling, you can count on the delivery to be recklessly fast, hopelessly irreverent, and packed to the gills with as much biting satire and as many goofballs and pratfalls as 100 minutes of film can carry. Sturges' comedies don't just zip along, they race, at a pace that can give you whiplash. Among the directors of vintage Hollywood, only Howard Hawks and Billy Wilder can match Sturges for sheer speed, and neither of them blends the whipcrack banter of the satirical comedy with quite as much slapstick and low humor as Sturges. In a Sturges picture, every finely crafted expression of lightning wit is matched by a wacky tumble over the sofa or flying kick in the caboose; his finesse in this field is such that he gets career performances out of born clowns like Eddie Bracken and makes even a straight-arrow like Henry Fonda look like a pratfall prince. And never let it be said that Sturges underestimated the comedic punch of a silly name; why settle for Smith or Jones when you can have a Kockenlocker, a Diddlebock, or a Hugo Standoff? Call it a cheap laugh, but hey, at least it's a laugh. Every laugh mattered to Sturges, and he seized every opportunity to generate one. His movies' mix of witty wordplay, physical gags, loopy characters, and acerbic social commentary make for a unique and heady cinematic cocktail, the kind that makes you love to get drunk. And want to shoot up a train.