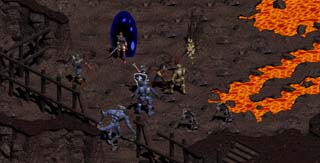 1. Diablo (Blizzard Entertainment).It floored the critics. It flew off the shelves. It knocked the competition into the next century. With a monster game engine, a haunting score, and a storyline that's kept a legion of worldwide fans thirsting for more, this RPG title boasts one of the most intuitive interfaces of its genre. It also brandishes some of the best sword-and-sorcery graphics of its generation.

2. Starcraft (Blizzard Entertainment).Five minutes of demo testing, and any self-respecting gamer would get sucked into this RTS title as if seated on the edge of a black hole.

3. Myth (Bungie Software).This diversionary brain puzzle can challenge even minds of the Mensa kind, and Joe Q. Public could theoretically spend years plowing his way through this smoothly decorated, eccentric world. Strolling through this landscape has been compared to the experience of perusing a museum filled by works from extraterrestrial artists.

4. Tomb Raider II (Eidos Interactive/Core Designs).Busty babe totes sidearms and saves the world. What more could a 13-year-old want on his computer monitor?

5. Pac-Man(Atari).The familiar yellow head with a missing wedge grew out of arcades into the world of Atari game systems, Saturday morning cartoons, and the hearts of kids developing under the era of trickle-down economics.

6. Space Invaders (Atari).By today's standards, this simplistic single-fire shooter doesn't hold up against the likes of titles of the Star Trek: Starfleet Academy ilk, but its influence is still felt as a reference point from which gamers first pitted their trigger fingers against intergalactic ships bent on global conquest.

7. Half-Life (Sierra Software/Valve Software).Science fiction meets a time-ripped reality, complete with alien creatures and bloodied graphics, in this first-person shooter that broke all the rules of its predecessors.

8. Wing Commander III (Origin Systems). Who could resist playing Mark Hamill's Col. William Blair character in this Star Wars-esque space drama which also sports Malcolm McDowell as a power hungry general with designs that include the ruination of an entire race? Great movie sequences and high-tension, lyrical space dogfights give this title from Origin Systems an enduring legacy.

9. Frogger (Atari).With a career that includes a guest star spot on TV's Seinfeld, this jump-and-go game ruled the arcade by the simple premise of its easy-to-learn controls but hard-to-master levels.

10. Pong (Atari).Today's kids, spoiled on such devices as Pentium III chips and supercharged video cards, would laugh with confusion, trying to grasp the simple pleasures of this once-popular Atari game. Elementary beyond argument, but challenging nonetheless, this table-tennis title boasted one of the earlier examples of multiplayer features and spawned many a late-night tournament between grade-school devotees.