Top Ten Technologies of the Century 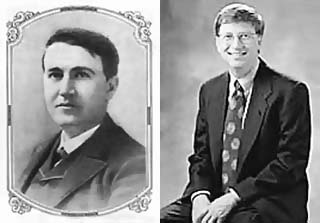 Thomas Edison and Bill Gates: One began the century with a boom, the other ended it with a bust.

The 20th century has hosted an incredible plethora of technological advances. Medical advances are such that the average Joe can extend his usefulness and outlive it. Science split the atom so that we could destroy a couple of cities in the name of peace, and we sent men to the moon so that they could bring back some rocks. We accidentally learned to melt ice caps and create more forceful hurricanes, and we figured out how to build more cars than we'll ever have drivers. All cool stuff. But for my money, the real revolution is in the evolving diversity of communications media from that first phone call to Mr. Watson to the Information Age, which is much hyped, and deservedly so. My top 10 technologies support the propagation of rock & roll, democracy, pornography, and capitalism -- the Best Stuff of our postmodern life.

1. Telephone. Actually invented in 1876, the telephone spread throughout the U.S. and Canada by 1900, and as year 2000 approaches, many of us carry our cell phones with us wherever we go. The one-to-one interactive telephone was our first step toward today's wired culture.

2. Radio. The telephone was personal and interactive, but radio was public one-way broadcasting, and damned if it didn't prove to be a great medium for advertising. Also news, political speeches, and sitcoms. But with the advent of television, radio realized its true mission: as a platform for rock & roll.

3. Television. Television began to catch on smack dab in the middle of the century and the postwar baby boom. Fifties television was radio with pictures -- sitcoms, variety and game shows -- all very safe, secure, and saturated with commercial messages. Television programming defines the postwar era and created a whole generation of crazy idealists who were assailed with images of war in Vietnam. They witnessed assassination and scandal, turned in their idealist gear in exchange for Profound Cynicism. Then they learned to play the market.

4. Cable television. Through the Fifties and Sixties, we saw nothing on television that wasn't channeled through one of the big three major networks, which meant that decisions about our media ecology were made, more often than not, by marketing droids whose creative accountability was effectively nil. Then cable television and public access came along, and network television, its ratings diminished, had to become more daring and creative to recover. As a result, we now have more diversity and more choices, and though 90% of the programming is still crap, the worthwhile 10% is a much bigger slice. Oh, yeah, we also get CNN, and this is a great time to mention --

6. The Internet. All the advances I've described so far tended to open more channels for diverse communications, but they were always mediated by whatever entities owned and/or controlled the mechanisms for delivery. The Internet, though, was a huge cooperative network. No entity was completely in control, and the barriers to entry were insignificant as the network began to spread --

7. Privatization of the Internet. -- especially as the backbone of the Net was privatized, removing constraints on access and commercial activity that were associated with its former character as a research and development network. Before 1992 or '93 you couldn't buy service from an Internet Service Provider (ISP); however, in less than a decade, the ISP business has become a major commercial force, with huge providers like AOL competing with smaller national and local providers. The killer app of the Internet, electronic mail, is now widely used, destined to become ubiquitous.

8. Graphical user interface and the World Wide Web. The Internet was a marginal presence before Tim Berners-Lee and others created hypertext markup language (html) and hypertext transfer protocol (http), a couple of technical solutions that supported the transfer of formatted pages with images. The further development of html after it was created ran parallel to the increasing sophistication of graphical user interfaces (MacOS for the Apple Macintosh, Windows for the PC). Hypertext on computer networks was a kind of three-dimensional text. Links were compelling -- an increasing number of users were drawn into the World Wide Web, the commercial potential of which seemed clear. Attempts to make money with commercial magazine formats were not wildly successful; however, with the advent of e-commerce, a full-fledged industry was born.

9. Web media technologies (streaming audio and video, MP3). It wasn't enough to move text and images over the Internet. Technologies were developed for transmitting audio and video. Originally these transfers were long, clunky, and prone to failure, but streaming technology changed all that. The creation of the MP3 format was another important advance, allowing full digital sound sufficiently compressed so that download time and storage space became less of an issue.

10. High-speed access (Broadband). Finally, high-speed access by ISDN, DSL, and cable modem allow data to move so quickly that an extremely robust mixed-media environment is possible. Where does this go? Could be television all over again. I've given up predicting, though. Wait. And. See.