1. Electronic commerce is a hit! People started buying a lot of their stuff online this year. E-commerce looks more and more like a killer app, though there are obvious kinks in both the technology and the service. Then again, the Wright Brothers weren't in the air all that long. 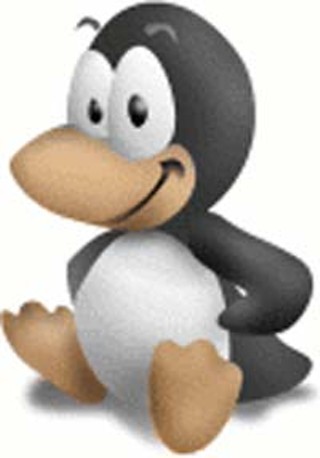 3. Microsoft antitrust suit. Bill went to court, and the judge slapped him upside the head, figuratively speaking, with his findings of fact. But in finding that Microsoft's practices were monopolistic, the judge was only stating the obvious, no?

4. Linux and Open Source. Part two of a one-two punch: As Microsoft was slapped for using its operating system dominance as a bludgeon, Linux proved to be a viable alternative. The rock-solid Linux operating system, a PC version of Unix, falls within the Open Source movement, wherein the creators of computer software publish their source code so that others can improve it. A community alternative to the corporate proprietary Microsoft approach, Open Source is resonant with the anarchic character of the Internet.

5. The bull market and the bullshit market. Computers made online trading easy and accessible for regular folks, and "day traders" began to have a serious effect on the market. And Internet stocks totally boomed based on very positive speculation about the Net's commercial future. This is a boom that might have gone bust by now if day traders hadn't changed the baseline market psychology. The resulting bubbles are so big and so thin that "the long boom" everybody's been talking about might just be the sound of an explosion, all those bubbles bursting at once. But you didn't hear that from me. 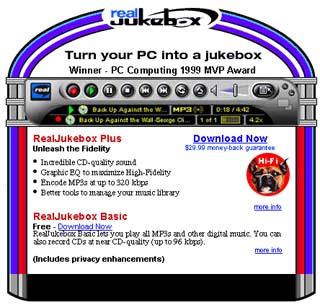 While the MP3 debate raged on, RealJukebox was one of the many sites supplying free MP3s to thousands of users daily.

6. I want my, I want my, I want my MP3. People were coming to blows over MP3 at various conferences this year. New technology will almost certainly make the record company's current role obsolete along with the sense that artists work for them rather than vice versa. If I owned a record company, I would be working hard to redefine my role and forget about trying to preserve an increasingly archaic status quo.

7. High-speed Internet access gets real. High-speed access (DSL, cable modems) should already be ubiquitous, but cable and phone companies weren't gonna get serious about these services 'til they saw a real market developing. There's also been the question of whether big operators such as Time Warner and Southwestern Bell should be able to use their dominant position to take business away from small ISPs. Whatever the case, we have both DSL and cable options in Austin, and quite a few folks are migrating to Time Warner's RoadRunner service. The next question is: What will be delivered over the high-speed lines? Today's Web sites constrain graphics and multimedia so that the average user with a 28.8 modem can download fairly quickly. What's the critical mass of broadband connectivity at which Web sites will begin to change? And how long before today's high speed is tomorrow's slow walk?

8. Millennium bug bites. As I write this, the thing I most look forward to after January 1 is an end to Y2K paranoia. By the time you read this, you'll know whether you had to haul yourself into the bunker or not. My guess is not. Just in case, though, I have a few extra bottles of wine and a half-bottle of whiskey in reserve.

9. Free! (e-mail, PCs, Internet access) Though free e-mail has been around for a while, this year's proliferation of other free services, along with the lower cost for computers and peripherals, sends a clear message: This technology is sinking into our lifestyles, embedded in our thinking as a necessity like the phone, the refrigerator, the television set, and the Thighmaster.

10."Harmful to Minors" bites some dust. A civil liberties win: the November ruling in the 10th circuit of the U.S. Court of Appeals that the "harmful to minors" concept, when applied to the Internet, censors adult speech, and is therefore unacceptable as law. This is significant because, after the Supreme Court's ruling rescinding much of the Communications Decency Act, "harmful to minors" legislation began cooking in various pots as the next most likely recipe for Net regulation. According to ACLU's Barry Steinhardt, writing for the New York Times' Cyberlaw Journal, "The consequence would be that speakers would have to limit their online speech to only that which is acceptable for minors." The court got it, and the law was overturned. Steinhardt notes that this decision may deter other states from passing similar laws. In the end parents might just have to take responsibility for their kids -- who'da thunk it?