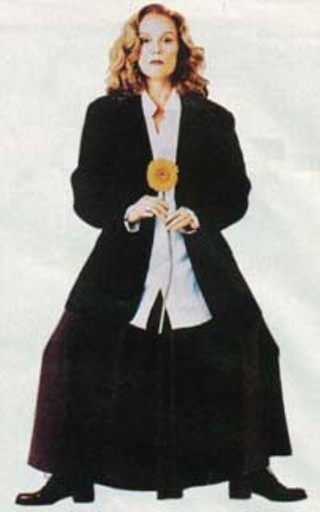 Back in the days when I thought I wanted to be famous, I never imagined being beautiful or sexy. Not that those things didn't appeal to me. But before liposuction and tummy tucks, it seemed that beauty was the result of heredity. In other words, a matter of luck. No, I didn't want to be famous for my beauty -- I wanted to be known for being funny. Rib-cracking, breath-snatching, milk-blown-through-the nose funny. I wanted to make truck drivers weep, prissy women snort, and the pious and straight-laced explode in back-arching guffaws. One of the funniest actresses I admired brought me to tears earlier this month, not because of a grand delivery, but because of her sad and untimely exit. The divine Madeline Kahn died December 3 after a yearlong battle with ovarian cancer. She was 57.

Part chanteuse, part spitfire, part clown, she was a performer with an inspiring sense of comic timing and a brilliant delivery that succinctly and generously informed audiences about the characters she played. And then there was that classically trained soprano voice that soared at the same time it delighted. Kahn's voice was most memorable in the Mel Brooks movie Young Frankenstein, in which, at the height of passion, she broke into "Sweet Mystery of Life." Prior to that, she sang a Marlene Dietrich-inspired torch song (with tongue planted firmly in cheek) in Brooks' Blazing Saddles. Her performance earned her an Oscar nomination. Her other notable films include What's Up, Doc? and Paper Moon, for which she earned another Oscar nomination.

A turn to television used to signal a waning career. Not so for Kahn. She was a working actress who knew how to use all the mediums available to her -- movies, television, and the stage. In 1983, her sitcom, Oh Madeline (ABC) only made it through one season, but not without earning her a Golden Globe nomination for Best Performance by an Actress in a TV Series. Her recent television work included the voice of Mrs. Shapiro on Bill Cosby's new animated series, Little Bill (Nickelodeon) and as Ruth's (Phylicia Rashad) best friend and business partner on Cosby (7pm, CBS). Though chemotherapy curtailed her work on the show, Kahn was able to film four episodes this season. Her last original episode of Cosby airs December 22, and features Pauline (Kahn) and Ruth trying to buy the property next to their coffee shop to keep a fast food franchise out. A special episode of Cosby will pay tribute to Kahn, featuring clips of her work and remembrances from the cast. The special episode will air December 29.

What made Kahn so funny? The timing and the delivery were both solidly there -- those technical aspects that are at once crucial, but so difficult to acquire when they don't come naturally. The other wonderful thing about Kahn was her courage -- the sense that no choice was off limits, and that however kooky the choice, it would be delivered with aplomb and confidence, and it would appear to be the singularly perfect choice. Comedically, she was in the same league with Lucille Ball, Vivian Vance (comparisons to Lucy were made of her in Oh Madeline), and Carol Burnett, and across the pond, to Jennifer Saunders and Joanna Lumley of Absolutely Fabulous (Comedy Central) and Patricia Routledge in Keeping Up Appearances (PBS).

Kahn was also capable of a bittersweet tenderness, infused with comedic flair, as her Tony-award-winning performance as Dr. Gorgeous in The Sisters Rosensweig is described. She showed the same talent in Cosby, particularly in an episode in which she was interested in a mysterious man who frequented the coffee shop -- to flirt with her, she thought -- only to learn he was an undercover cop using the shop as a stakeout post. After the bust, when he returned to continue the courtship, she was full of blustery indignation, embarrassment, and longing (she thought his interest in her was part of the stakeout). They got together in the end (it is a sitcom, after all), dancing cheek to cheek, whirling under the glow of ballroom lights and a diaphanous melody. And that image, of Kahn dancing into the night, is the one I'll keep for years to come. Even More Holiday FareOlive the Other Reindeer (12/17, 7pm, Fox): Simpsons creator Matt Groening offers a new animated holiday special about a dog named Olive (voiced by Drew Barrymore) who helps Santa (Ed Asner) save Christmas. Jay Mohr and Joe Pantoliano also lend their voices.

The Simpsons (12/19, 7pm, Fox): Leave it to The Simpsons to bring a refreshing shot of irreverance to the buffet of mostly sweet-toothed holiday fare. This year's episode, "The Grift of the Magi," finds Springfield Elementary bankrupt and turned into a factory where Bart, Lisa, and the other Springfield kids are forced to produce the toy of the season. Tim Robbins, Gary Coleman, and Joe Mantegna lend their voices.

The X-Files (12/19, 8pm, Fox): Did you miss the holiday episode last season? Catch it this year. Mulder and Scully go to a spooky house on Christmas Eve only to be tormented by nasty spirits who turn them topsy-turvy scared and confused. Besides charming performances by Lily Tomlin and Ed Asner, tune in to see Scully (Gillian Anderson) lose her high-buttoned cool and scream like a girl. Hey, you knew she had it in her.