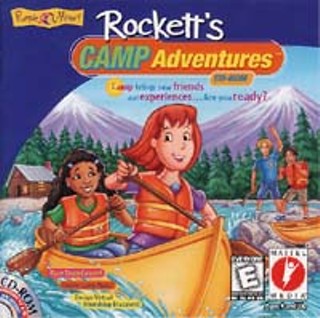 (PC, Mattel Media/Human Code, $19.99)
Barbie is your riding instructor in this first-person horseback riding simulator game, reportedly the first of its kind. The goal is to ride around a mountain and pick up notes and treasures, which will eventually lead you to a pack of mystical wild horses which no human has ever seen. For the very young beginning computer user, this game might be a good introduction to mouse direction and key controls (it helps to be a Barbie fanatic, too). For everyone else, the game is probably too passive to maintain much interest; except for jumping, the program does all the "riding" for you, making the simulator a bit like watching television from the back of a horse. To make things worse, the graphics are slow and choppy. Getting little girls away from their dolls and onto computers is no doubt a great idea; unfortunately, Barbie Riding Club doesn't have a lot to offer.

(PC, Hasbro Interactive/Human Code, $18.99)
Based on the popular board game of the early 1980s, this updated, utterly Nineties version of the original "truth or dare" game proves that you can't always improve on a classic. Sure, it's got a lot of the same features -- you can even team up with other players online -- but it's hard to get excited about questions like, "In what century did women get the right to vote?" and "How many people are you usually with when you're on a date?" This isn't like the truth or dare we remember. What's more, most of the game's goofy gimmicks -- like the rule that makes you wear "zits" on your face for wimping out on a dare or getting an answer wrong -- get lost somewhere in this clunky translation.

(PC, Simon & Schuster/HerInteractive, $29.99 each)
What girl didn't grow up wanting to be Nancy Drew? Everything about the teenage sleuth -- from her long, strawberry blonde hair to her killer investigative skills to her hunky boyfriend, Ned -- was simply too cool for words. Wannabe Nancys get their wish with this new series, which puts players in the girl detective's shoes as she goes about her adventures, collecting clues, solving mysteries, and generally saving the day. In the first, Secrets Can Kill, you're trying to solve a murder that happened at the local high school in Paseo Del Mar, Florida, where Nancy is staying with her aunt. In the second, Stay Tuned for Danger, Nancy goes undercover on a soap opera set to find out who's been making death threats against daytime's hottest star.
Everything about these games is great -- from the lovely, detailed graphics, to the richly complex storylines, to the beautifully animated characters. Even at the easiest of three difficulty settings, both games are trickier than they appear; each offers an astonishing number of options, clues, and characters. To solve the mystery, you have to pay attention to every detail, including letters, background scenery, and comments from people you encounter along the way. Best feature: If you make a game-ending error (which is almost inevitable), you can hit the "Second Chance" button on the game menu to start playing again just before you made the fatal goof.

(PC/Mac, Purple Moon/Mattel Media, $19.99)
This Purple Moon title is like the Choose Your Own Adventure your parents always wished you would read. Totally PC, totally unobjectionable, and totally devoid of surprises, these camp "adventures" are about as exciting as going to summer school. The game takes you through a series of stories about a girl (Rockett) going to camp for the first time. The player decides what Rockett will do in various "moral dilemma" situations; whether she chooses to go against the crowd or bow to peer peessure determines how much fun she has at camp. If you get tired of that, there's also virtual friendship bracelets, a canoe race, and a cavern maze. Thank goodness real camp was never this un-adventurous.

Secret Paths to Your Dreams

(PC/Mac, Mattel Media/Purple Moon, $19.99)
This New Age-y game lets you "paint" dreamscapes -- your own and those of the Whistling Pines girls, five characters that appear in this and other Purple Moon titles -- on an animated screen. If you paint the dreams the girls describe to you correctly, you get a "magic gemstone" that unlocks a new paintbrush on your screen. The game is silly and a little repetitive; but as a glorified drawing program for budding artists, it's actually pretty fun. The game also allows you to save or e-mail dream images and go online to Purple Moon's Web page, where you can look for updates, find out "background" info on the characters, and swap images with others.

(PC, Activision/Girl Games, $27.95)
This surprisingly creative Teen magazine spinoff lets players create their own fashion magazine, including full-color layouts, headlines, and photos imported via scanner or the Internet. Everything is in here, from a teenage "agony column" to do-it-yourself quizzes, horoscopes, and record reviews. Despite some technical limitations -- including a limited choice of page layout options and slow-loading graphics and video clips -- this design program is unexpectedly fun, dynamic, and absorbing. Best feature: When an "issue" of the magazine is complete, it can be "published" via e-mail or black-and-white or color printer.